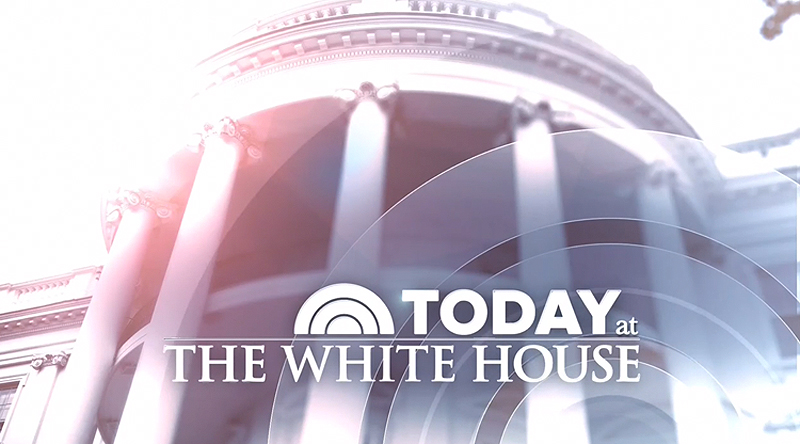 In case that address doesn’t ring a bell — it’s the White House. NBC News was granted exclusive access for a live, special edition of “Today” the originated from throughout the White House grounds Tuesday morning. The event was designed to tie in to President Barack Obama’s final State of the Union address, scheduled for Tuesday evening, though like ABC News sending “World News Tonight” anchor David Muir to Arizona for the College Football Championship final, it came across more as a gimmick at times.

For the special edition of the broadcast, “Today” started the show with its normal opens teasing non-White House stories, but switched to a light white, blue and red color scheme for the final tease. The show’s logo was appended with “at the White House” in an elegant typeface and Tuesday’s show also boasted a special announcer intro.

In addition, the show’s trademark rotating arch and ring design was retained, but with soft photography of the White House placed in the backgrounds.

Meanwhile, instead of relying on a fixed anchor location with a desk, the “Today” team, which included anchors Matt Lauer and Savannah Guthrie along with Al Roker, Carson Daley and Natalie Morales. Correspondent Jenna Bush Hager also joined the crew to “answer” the front door of the White House — a sort of homecoming for her.