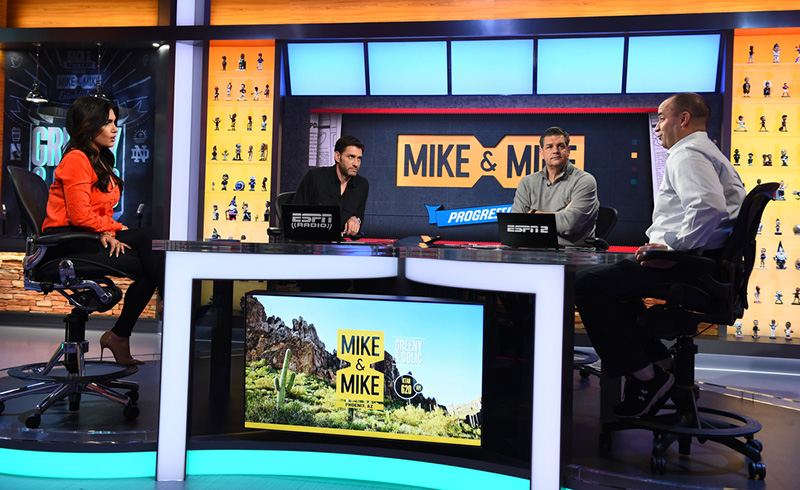 The set design, from James Yates Production Design, is an addition to Studio F, building upon Yates’ earlier project with ESPN. With the new set pieces, Studio F now stands at over 1,700 sq. ft. of studio space, creating a 360 degree environment for various programs.

The addition was built by Mystic Scenic Studios, with AV by AV Design Services and lighting from FLDA Lighting Design. The hallmark of the update is a 270 degree desk, which was crafted with conversation between hosts Mike Greenberg and Mike Golic in mind. The desk allows multiple guests or talent to join in, providing a range of shooting options, fronted by a seamless 47″ Philips IPS panel.

Behind the desk, a 11×5′ 3mm Leyard RTVH3mm LED wall provides a changing backdrop for the show, rotating through the new branding colors. This display is flanked by an assortment of 72 bobbleheads, which “Mike & Mike” previously showcased on the anchor desk of their old studio.

To the left, a 2×4 55″ monitor wall is comprised of Barco KVD-5521 IPS panels, showcasing views from around the world with time overlays. This area is used by Molly Qerim throughout the show to present news and updates. An 85″ Samsung 4K touchscreen is located on the right of the set, which can be used for social media updates or to break down a play.

Overall, the sets design adds warmth through wood and brick, while feeling sleek from the metal and backlit areas. The new show colors provide an interesting hue for some of the color-changing areas, creating a combination you don’t often see on sports TV.

The show was originally slated to move to New York City and the studio also used by “Good Morning America” in Times Square until ESPN put the brakes on the change last summer.