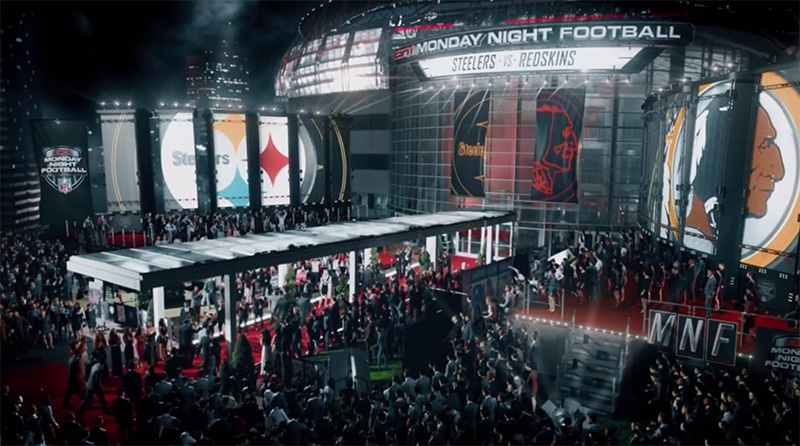 Football season is upon us and ESPN’s annual Monday night tradition returned this week with a new opening sequence and remix of “Heavy Action,” the broadcast’s long-standing theme.

“Monday Night Football” jumped to ESPN in 2006 from Disney cousin ABC and has seen updates to its intro and theme music each season to reflect the mood of the show and the changes in the league.

This year, the ‘MNF’ open focuses on Hollywood, an illusion to the NFL’s return to Los Angeles with the Rams. The open includes the new broadcast team of Sean McDonough, Jon Gruden and reporter Lisa Salters, along with 20 current NFL players and Pro Football Hall of Famers walking the red carpet in a scene straight out of “Entourage.”

“Monday Night Football has always been a showcase game for NFL players so we brought in some of today’s biggest stars as well as legends who helped make the series so iconic,” said Michael “Spike” Szykowny, ESPN’s senior director of motion graphics.

APM Custom (a division of APM Music) updated the theme music with an injection of Hollywood using an 87-piece orchestra at the historic Abbey Road Studios in London. The beat features more rock guitars and a techno undertone.

“I love playing on Monday nights so it was an honor to be invited to be a part of the new campaign,” said Larry Fitzgerald of the Arizona Cardinals. “It was incredible to be around my contemporaries as well as Hall of Famers like Jerry Rice, Barry Sanders, Bruce Smith, and Franco Harris.” ESPN’s in-house Creative Services team worked on the new open with Carsten Becker of Motomo Studios, who has helped on past ‘MNF’ opens.

“Our new open combines the big event feel of a primetime NFL game with a blockbuster Hollywood movie premiere and we think fans are really going to like it,” said Szykowny.