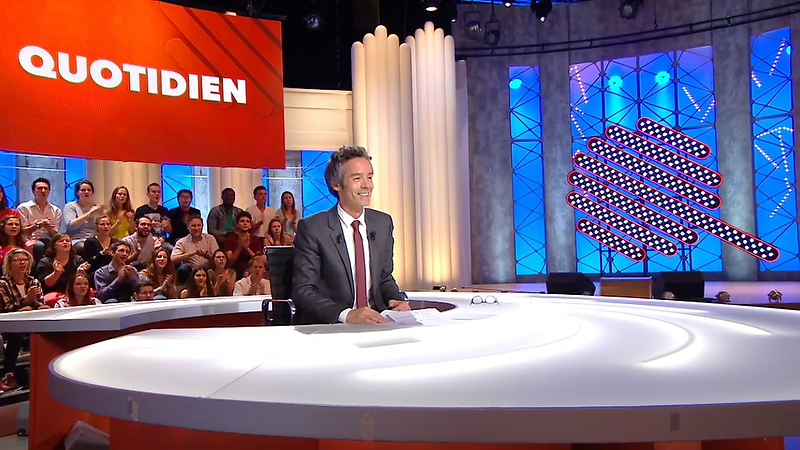 There, he reassembled much of the writing and on-air team from his former home for a new show with a similar feel and presentation style which debuted earlier this month, dubbed “Quotidien.” Translated, the title means daily, with the show airing new episodes most days each week in France. The show does include real journalists, such as Martin Weill and Hugo Clément, who travel the globe to cover events like the United Nations General Assembly and conflict in Syria. Weill has also been a common sight at presidential rallies in the U.S., interviewing the public with sometimes comedic results.

The center of the shows design is the unique “Q” logo, created by slicing the shape into multiple pieces. This logo then appears on microphones, on-set and in the shows opening graphics where it is formed from a series of flowing ribbons.

Similar to “Le Petit Journal,” the show features a live studio audience that wraps around the sets anchor desk with an LED screen behind in the shape of the show’s logo. Art deco columns surround the space, which was designed by Philippe Désert and built by Générale Décors, with various backlit walls of interconnecting lines. Two large LED screens hang overhead for the audience to watch comedic bits and to showcase the logo on wide shots.

Two large LED screens hang overhead for the audience to watch comedic bits and to showcase branding on wide shots. 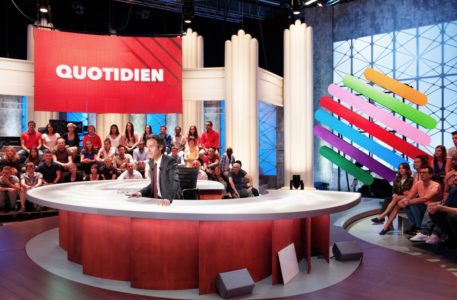