Fox to deploy ‘Be the Player’ feature for Super Bowl LI 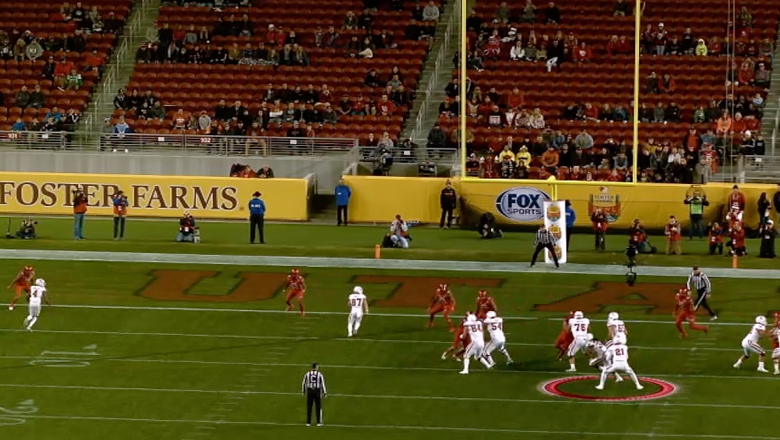 Through its Fox Sports Lab initiative, Fox is planning  to introduce unique storytelling tools for this year’s Super Bowl broadcast.

Using technology provided by Intel, Fox will feature a “Be the Player” feature for Super Bowl LI, which will feature a POV perspective from any player on the field without having a physical camera attached to the player.

“We tasked Intel to push (its) amazing Intel 360 Replay technology to the limit of what it could do, using their array of cameras circling the stadium to synthesize a player’s view on the field,” said Michael Davies, Fox Sports SVP of field and technical operations in a statement. “The cameras, backed up by a huge bank of Intel computing power, allow a moment to be recreated in 3D space, so that a ‘virtual camera’ can be placed at the player’s eye line — not unlike how limitless camera views can be created in video games.

“From the beginning, seeing and breaking down the play from the player’s point of view is the undiscovered country of sports broadcasting,” Davies added. This broadcast enhancement is like no other — it literally brings the audience down to the viewpoint of the player at the critical decision-making moment. What other choices did he have? Was his sight blocked? It all looks much different from field level, and can assist our announcers in describing what actually happened on the field.”

The Fox Sports Super Bowl LI production effort includes its largest deployment of Super Motion and 4K cameras and will utilized three production trucks and more than 30 cameras to deliver more than 20 hours of programming a day from Discovery Green in Houston, in addition to 70-plus cameras at NRG Stadium covering the game.

“We, as broadcasters, are always trying to provide the viewer with something they’ve never seen before,” said Zac Fields, Fox Sports SVP graphic technology and innovation. “With this new ‘Be the Player’ technology, it is now achievable and we are incredibly excited to debut this at the Super Bowl on FOX.”

The team was involved in deploying aerial production drones at the U.S. Open Championship, as well as using virtual reality companies to deliver a VR broadcast of more than a dozen major sporting events, including the Daytona 500, a Premier Boxing Champions title fight, the Big East, the U.S. Open Championship, Men’s Basketball Tournament, the Bundesliga season opener and multiple college football games.

In addition, Fox Sports teamed with GoPro in November to offer a first-ever POV camera from the hat of referees working the Big Ten Championship Game.