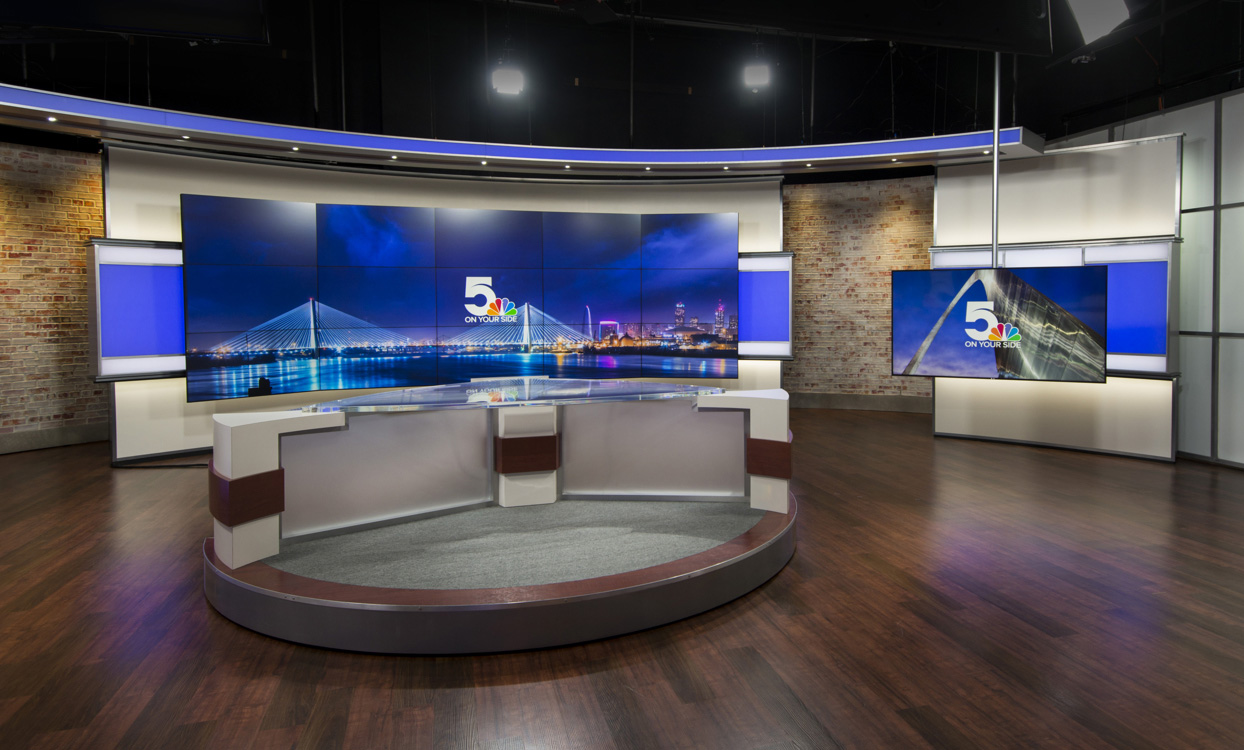 KSDK, the Tegna-owned NBC affiliate in St. Louis, Missouri, has unveiled an on-air makeover with a new logo and flexible wraparound scenic environment.

The station’s logo has dropped the more obvious allusion to the city’s iconic Gateway Arch, instead creating a custom drawn “5” that incorporates a more circular-shaped arch reference, similar to the view you’d have looking up from the base of the monument — as well as shifting to a vibrant shade of red.

The new curve also ties closely to the curve in the NBC peacock feathers.

In addition to the new branding, KSDK has also unveiled a flexible, 360-degree studio designed by Joe Lamberta of Jack Morton Worldwide, with the group’s trademark “in the round” style anchor desk allowing for multiple talent configurations as well as a myriad of shooting backgrounds.

The design incorporates warm wood floors with brick and sleek backlit surfaces, allowing the set to take on a variety of looks on-air while paying homage to St. Louis. The new set, fabricated by Southwest Scenic Group, incorporates tracking and movable pieces that allow for a variety of different looks.

For example, the camera left and right walls on either side of the anchor desk are movable, letting the station chose between a textured faux painted brick backdrop or backlit panels.

When exposed, the brick walls feature accent downlighting as part of the lighting design from Steve Mulkey at Redwood Media Group. The station also updated their lighting inventory with new LED instruments from Cineo Lighting.

The main anchor area boasts a 5×3 Philips video wall made of horizontally-mounted video panels, a similar look that’s used in a multipurpose standup area, though this video wall is mounted on freestanding metal pipes. The technology on the set was supplied and integrated by AV Design Services. The studio’s weather center, meanwhile, includes a presentation pod with monitor along with a longer, curved workstation backed with an array of video monitors.

The anchor area and surroundings are also equipped with a sleek curved header ribbon equipped color changing technology, a look that is echoed above and below the row of monitors in the largest of the set’s multifunctional areas. Camera right of the anchor desk also features a ceiling mounted video panel to create an additional presentation zone for reports and debriefs. Another multipurpose area, directly across from the anchor desk and intended for interviews and sports reports, is equipped with five monitors arranged in a V-shape, two of which can pivot, giving the area a different look and feel.