Hawaii’s expecting so much rain, a weather map used a unique color choice 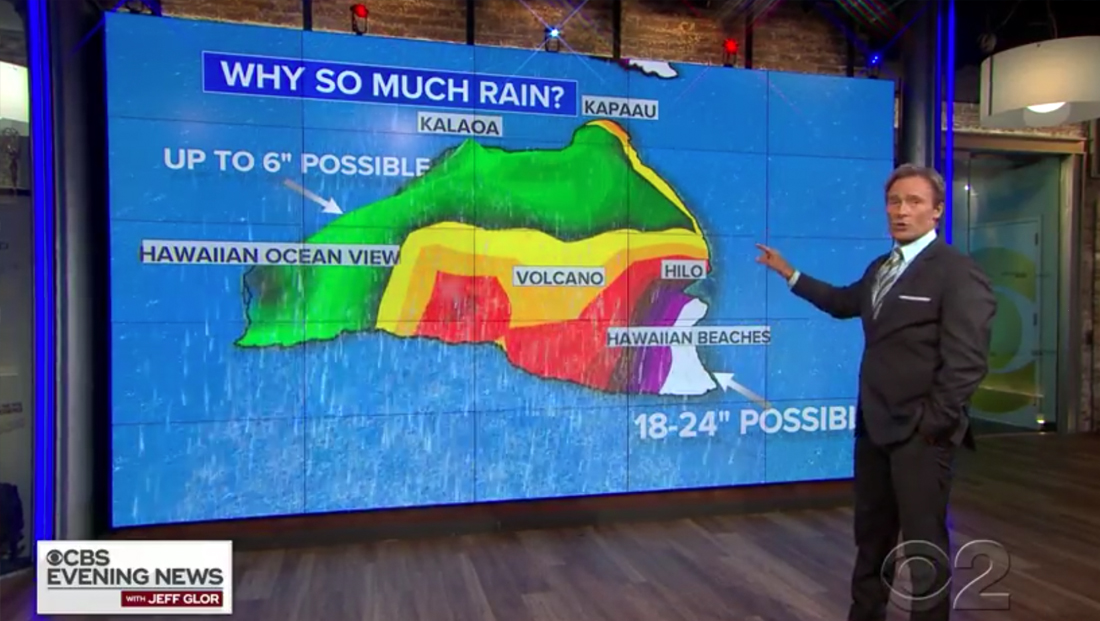 Hawaii is expecting so much rain that the “CBS Evening News” opted to use an unusual color choice to indicate the heaviest rainfall areas on its Wednesday, Aug. 22, 2018 edition.

Forecaster Lonnie Quinn, from the network’s flagship O&O WCBS appeared in Studio 57 using one the sets large video walls to provide coverage into the rainfall and pulled up a map showing projected rainfall on the Big Island in the wake of Hurricane Lane.

There is no official universal standard standard in using color coded blobs to indicate rainfall total, but on Quinn’s graphic, green indicated up to 6 inches, which is a hefty rainfall in and of itself, while the colors progressed through yellow, orange, two shades of red, a short of reddish-brown, purple and then white — which indicated a whopping 18 to 24 inches.

This isn’t necessarily the first time that white has been used on a rainfall map, but white also made a good choice to emphasize the potentially hardest hit areas.

Quinn’s map notably avoiding using blues since that could have been confused with the ocean surrounding the island.

Rainfall maps typically use a typical palette as maps indicating temperature zones, which can also vary slightly, and due to rising global temperatures weather maps have “run out of” colors to use — at least twice.