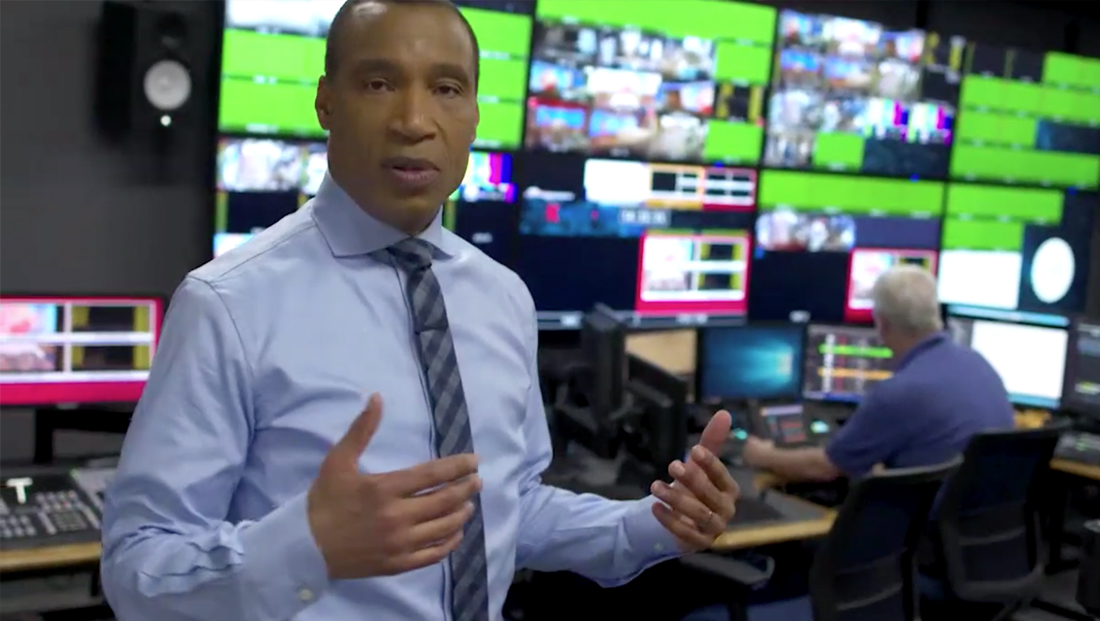 KHOU, Tegna’s CBS affiliate in Houston, Texas, is taking viewers on a tour of its new facility.

The station, which was forced to evacuate its Allen Parkway studios during Hurricane Harvey, announced it would move to the Galleria region of Houston in March 2018.

Anchor Len Cannon took viewers on a quick tour of the new facility at Capital One Plaza at 5718 Westheimer Road.

His tour included a stop in the new news studio, which has a new set with seamless video wall — an upgrade from the station’s original look back at the old building — as well as multiple anchor desks, including a standing option.

Next door is the studio for “Great Day Houston,” the station’s lifestyle program, while the newsroom is located a floor above.

The sprawling new newsroom occupies the entire width of one side of the building and boasts large windows on three sides.

A circular area in the middle of space with a full three-camera setup will serve as an alternate news studio space.

Tucked into one corner is the assignment desk and a colorful lounge area.

The station’s old building was heavily damaged from flooding brought by Hurricane Harvey in August 2017 — and the decision was made to move to a new location.

During the flooding. the station initially broadcast from a non-flooded conference room but was then forced to evacuate to Houston Public Media’s studios, where a temporary set was created.

At the time, the station’s news set was less than a year old, but was heavily damaged by flood water.

In September, the station moved parts of its old set to KUHT, the market’s PBS station owned by the University of Houston.

Then, in January 2018, a more “permanent” temporary set was installed at KUHT.

Components of this set appear to have been moved to the new building.

KHOU also opened a small, streetside studio in October 2018, but this facility was never planned as a full facility.

Shortly before opening that facility, the station also updated its logo, following the trend of Tegna stations switching to simplified looks.