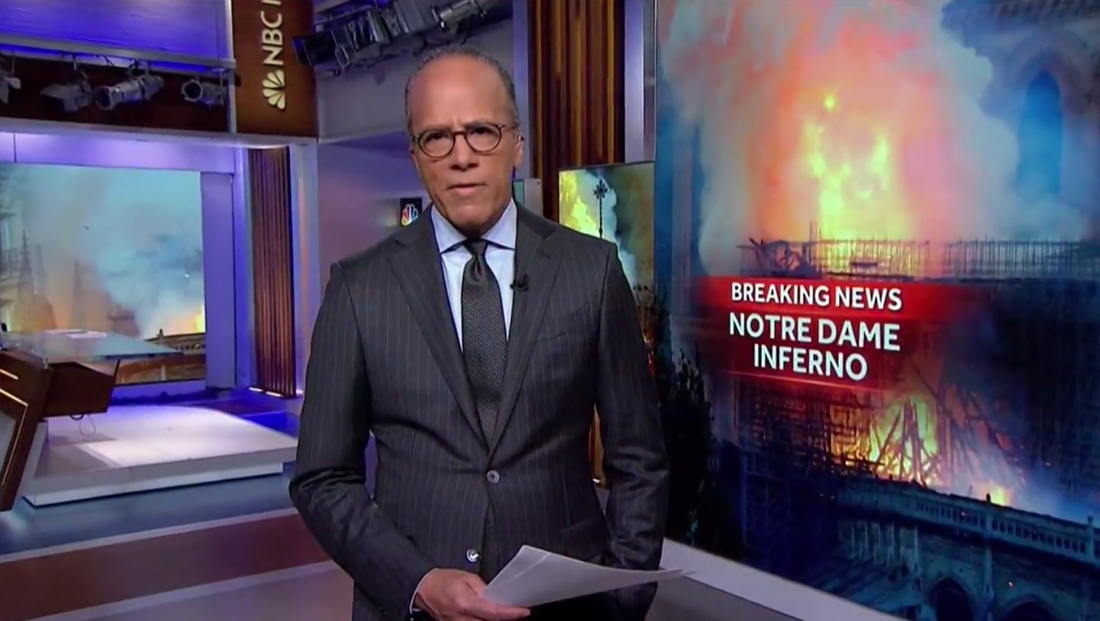 “NBC Nightly News” kicked off its broadcast with anchor Lester Holt standing in front of the video tower with topical graphics and a “Breaking News: Notre Dame Inferno” headline overlaid on a photo of the fire. 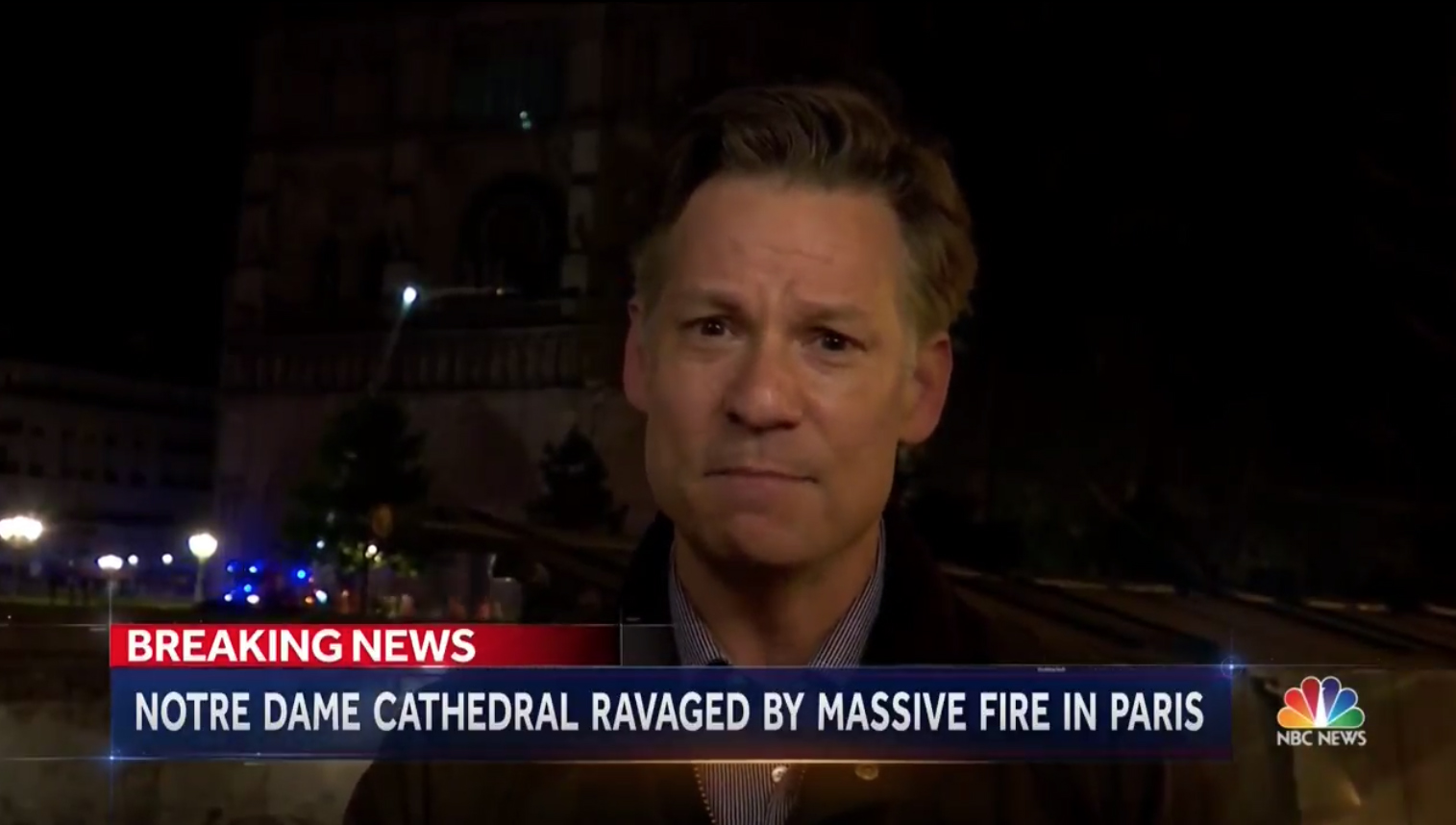 ‘Nightly News’ lead with a package from Richard Engel in Paris, appearing in a rather dark standup location with the cathedral barely visible in the background — though some emergency lights were visible. Before tossing to the package, Holt offered an extra intro on the story. 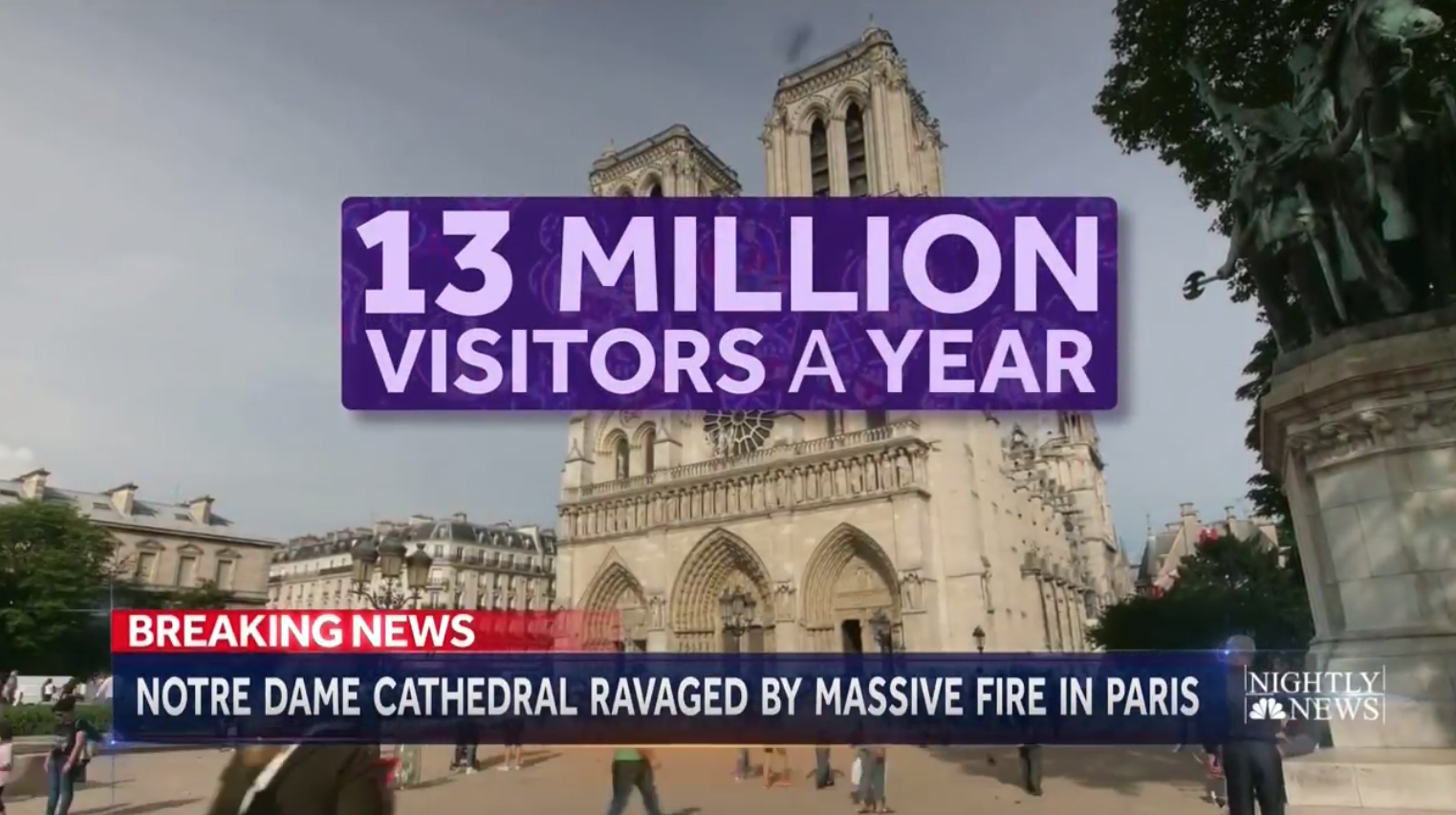 During Engel’s package, a violet box with stained glass texture behind it highlighted the number of visitors the cathedral receives each year. 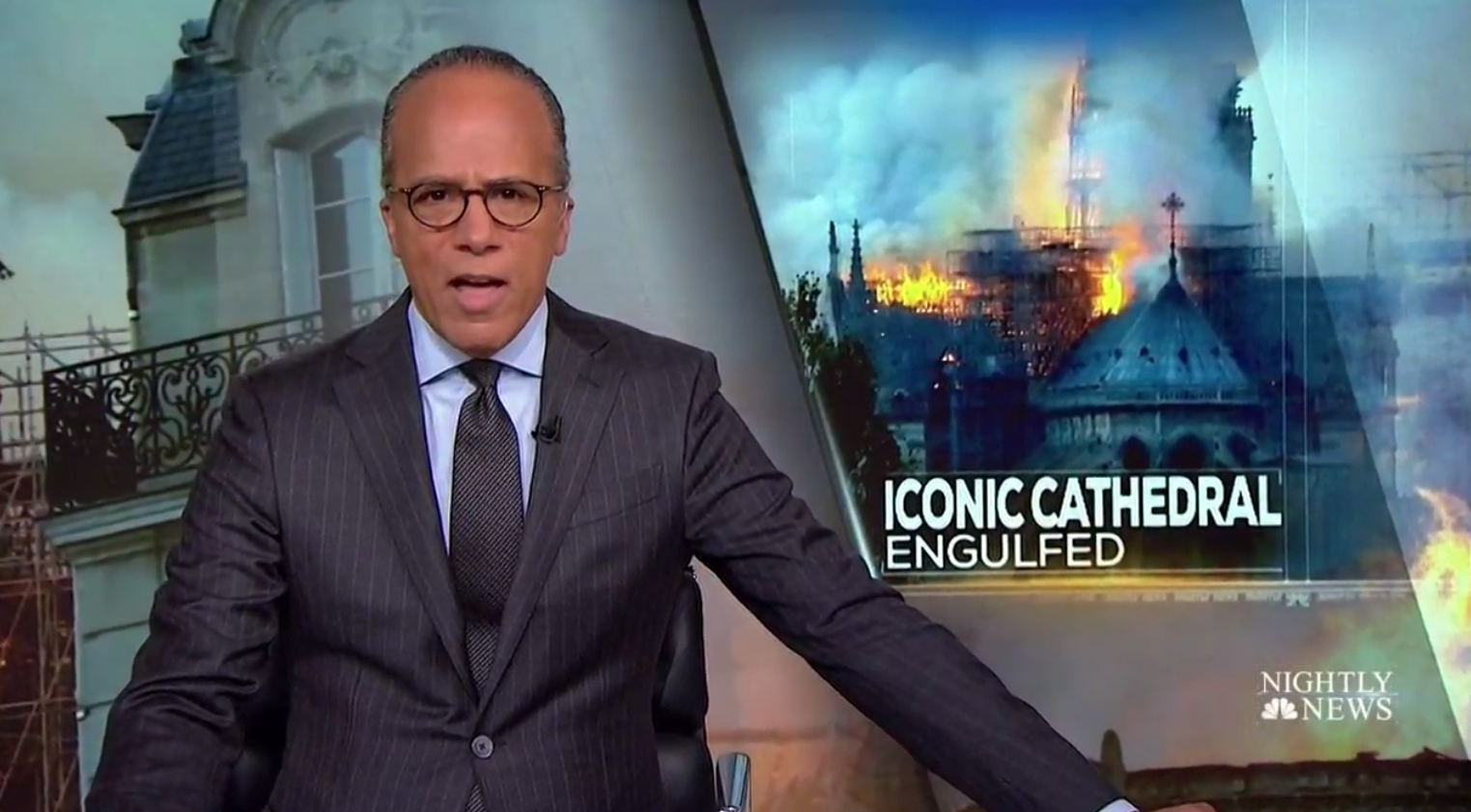 Holt then appeared back on camera at the anchor desk with the video wall behind him showing one of the broadcast’s new OTS style graphics, this one reading ‘Iconic Cathedral Engulfed.’ 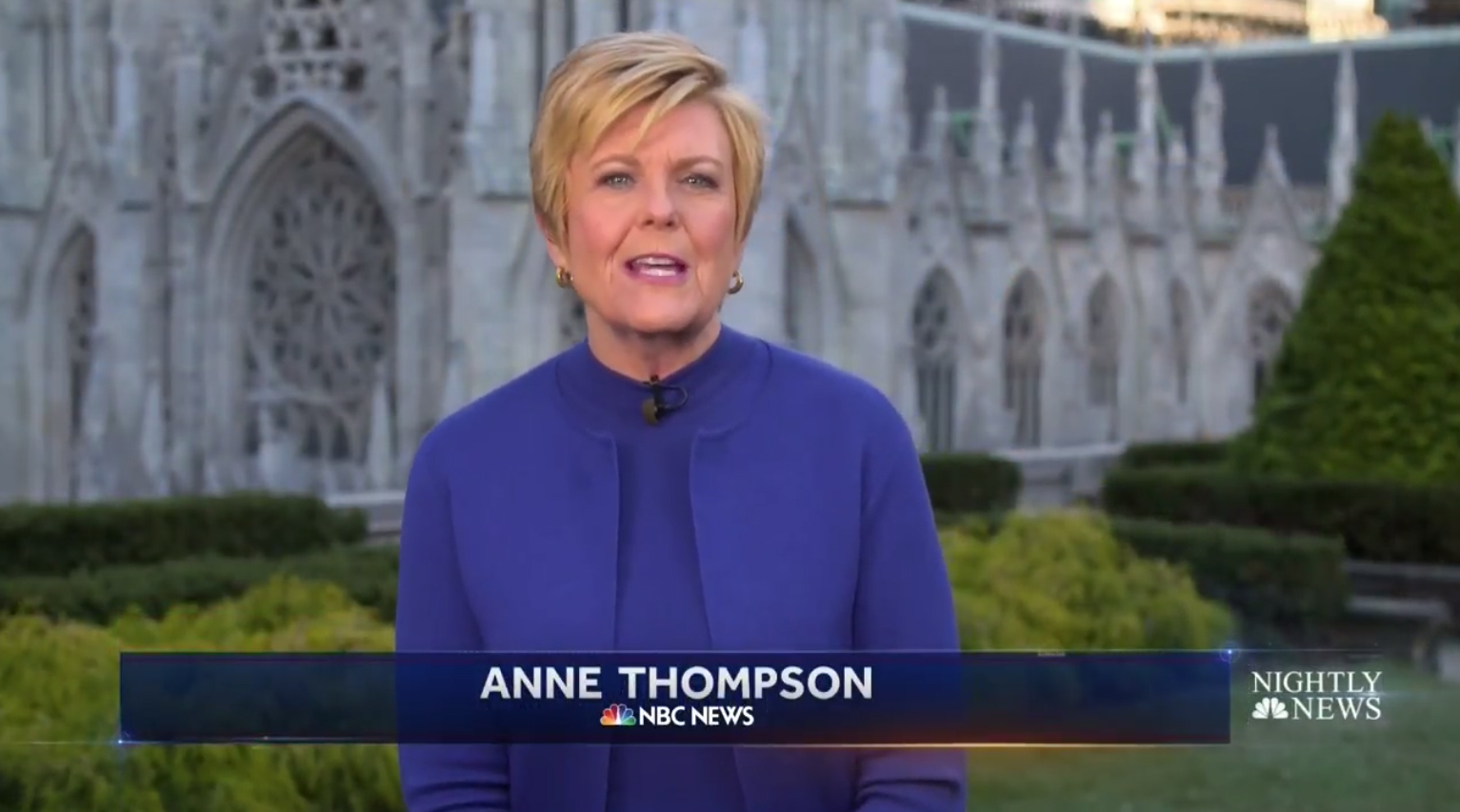 The broadcast then offered a report from Anne Thompson on the history of the cathedral as well as the building’s appearance in literature and film — including showing clips from the 1939 black and white version starring Charles Laughton and Maureen O’Hara. NBC’s corporate cousin Universal Pictures now owns the rights to the film and notably, NBC did not use clips from the perhaps more well known 1996 animated Disney iteration. Disney is the parent company of ABC. At the end of her report, NBC took advantage of Rockefeller Center’s proximity to St. Patrick’s Cathedral in New York City and opted to use that as the background, with Thompson standing in one of Rock Center’s rooftop gardens with the cathedral in the background. 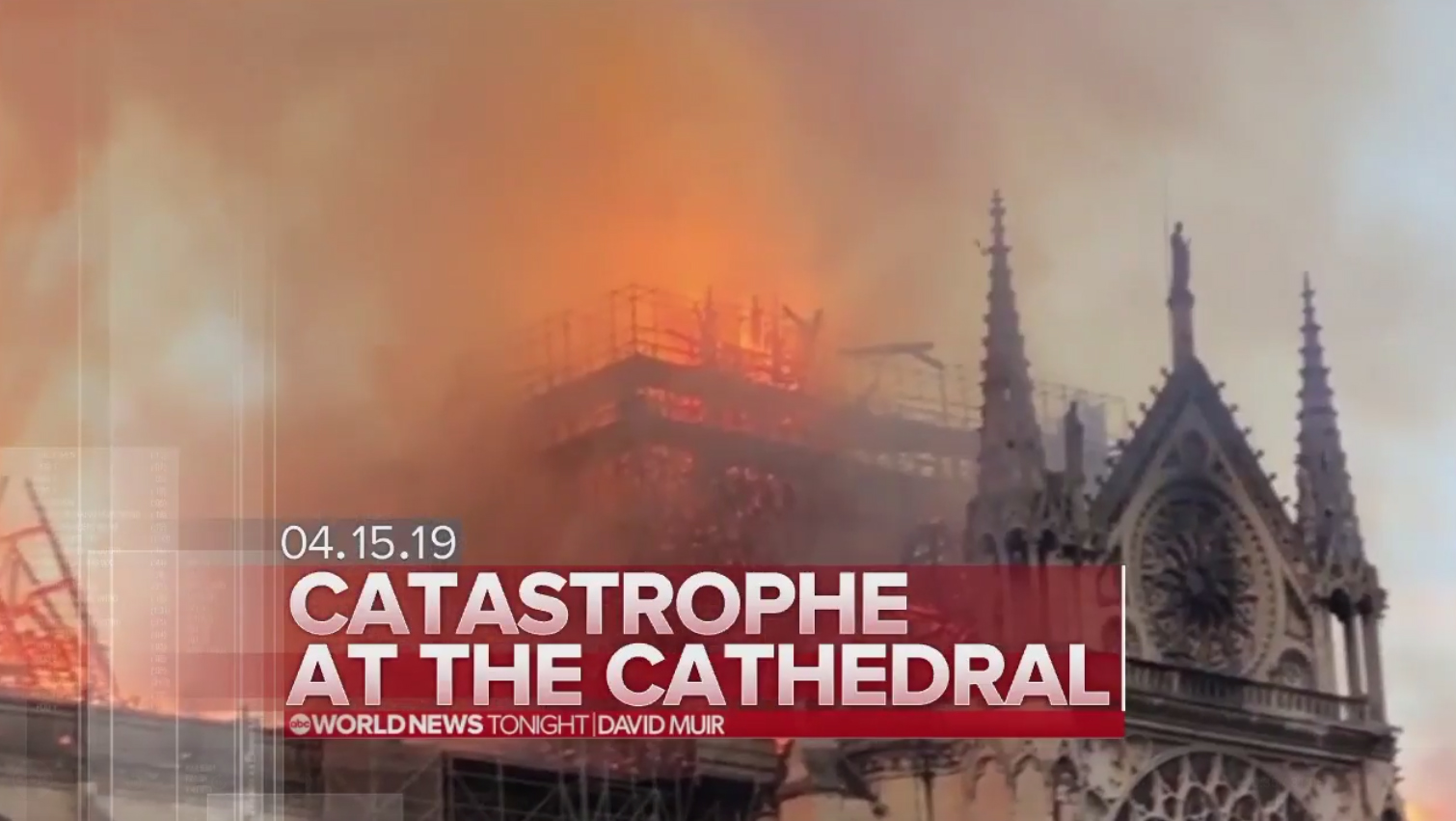 ‘ABC World News Tonight‘ used the headline ‘Catastrophe at the Cathedral’ in its teases. 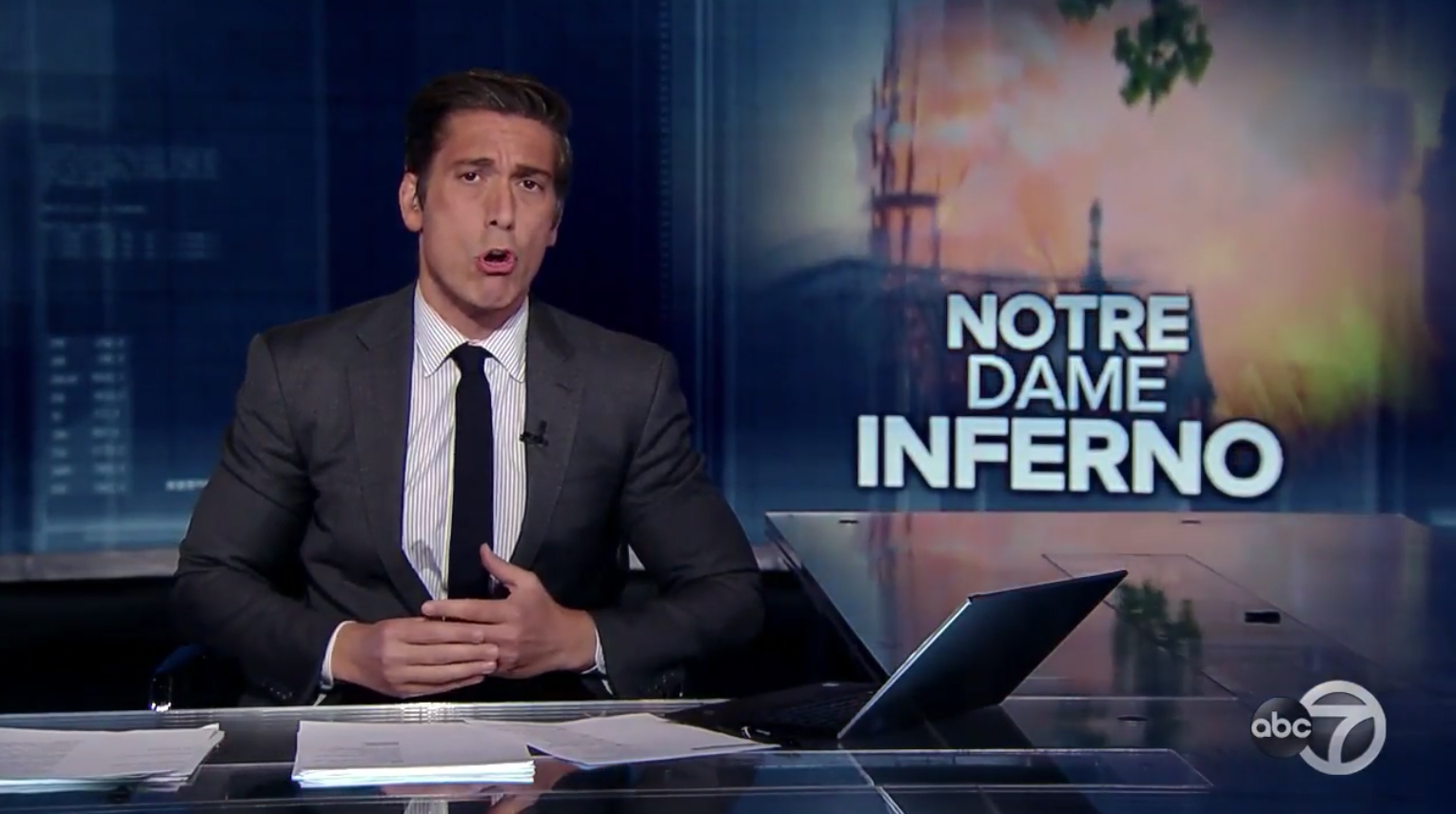 Anchor David Muir then introduced the story from in from of a video wall graphic that used the same headline as ‘Nightly.’ The broadcast ran a package from correspondent David Wright, who then joined the broadcast live from in front of the darkened cathedral. The newscast then ran a series of taped phone interview Muir conducted with witnesses to the disaster — under the banner ‘Everything is Burning.’ 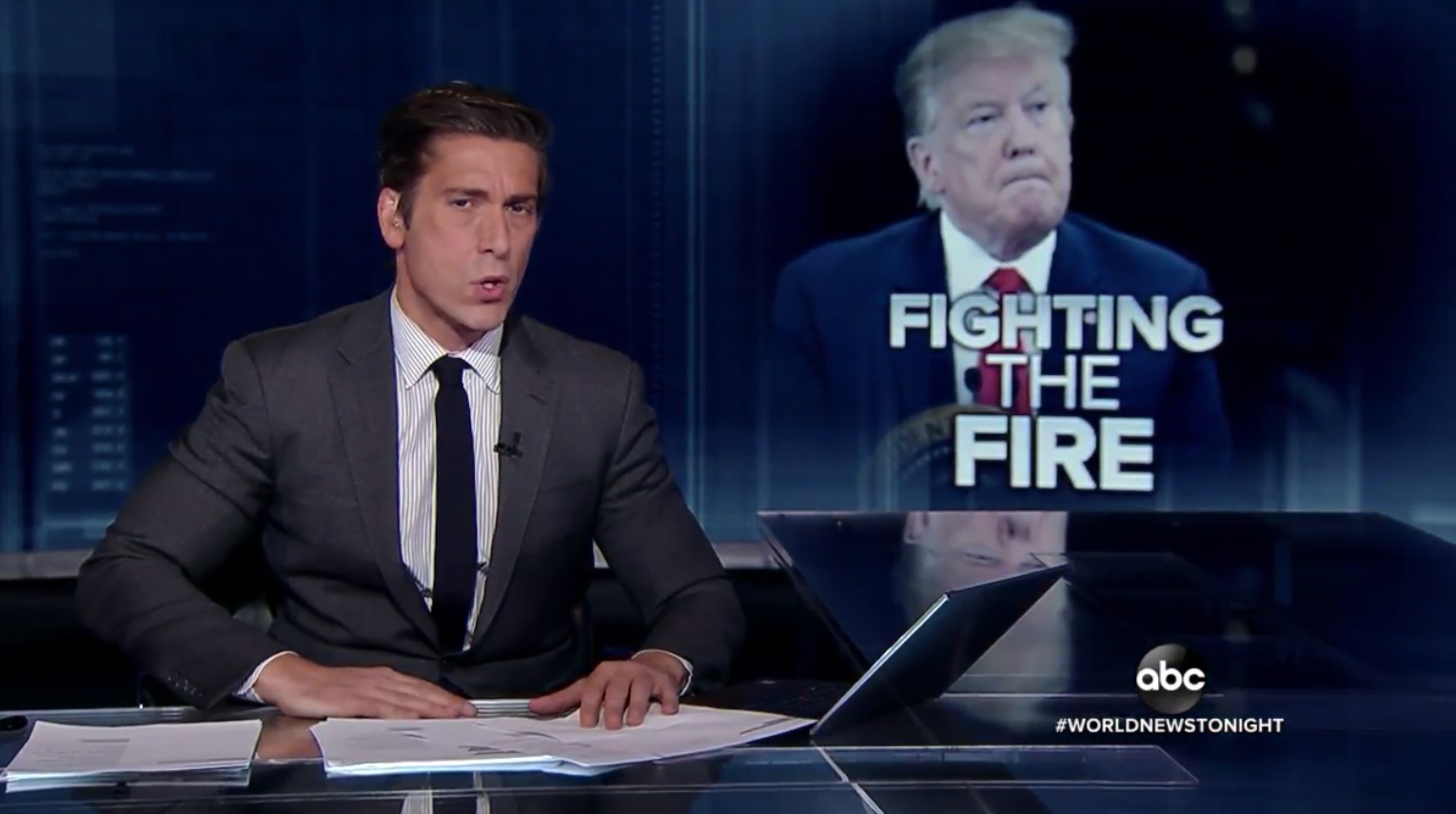 ‘World News Tonight’ then switched angles to cover Donald Trump’s take on the disaster — including his unsolicited advice to use water tankers to drop water on the blaze — which was rejected by French fire fighting officials because it would have likely caused more damage to the structure. Jonathon Karl contributed to this part of the broadcast and then joined Muir live from the White House. Karl transitioned from Trump’s take on the fire to the pending release of the redacted Mueller Report. 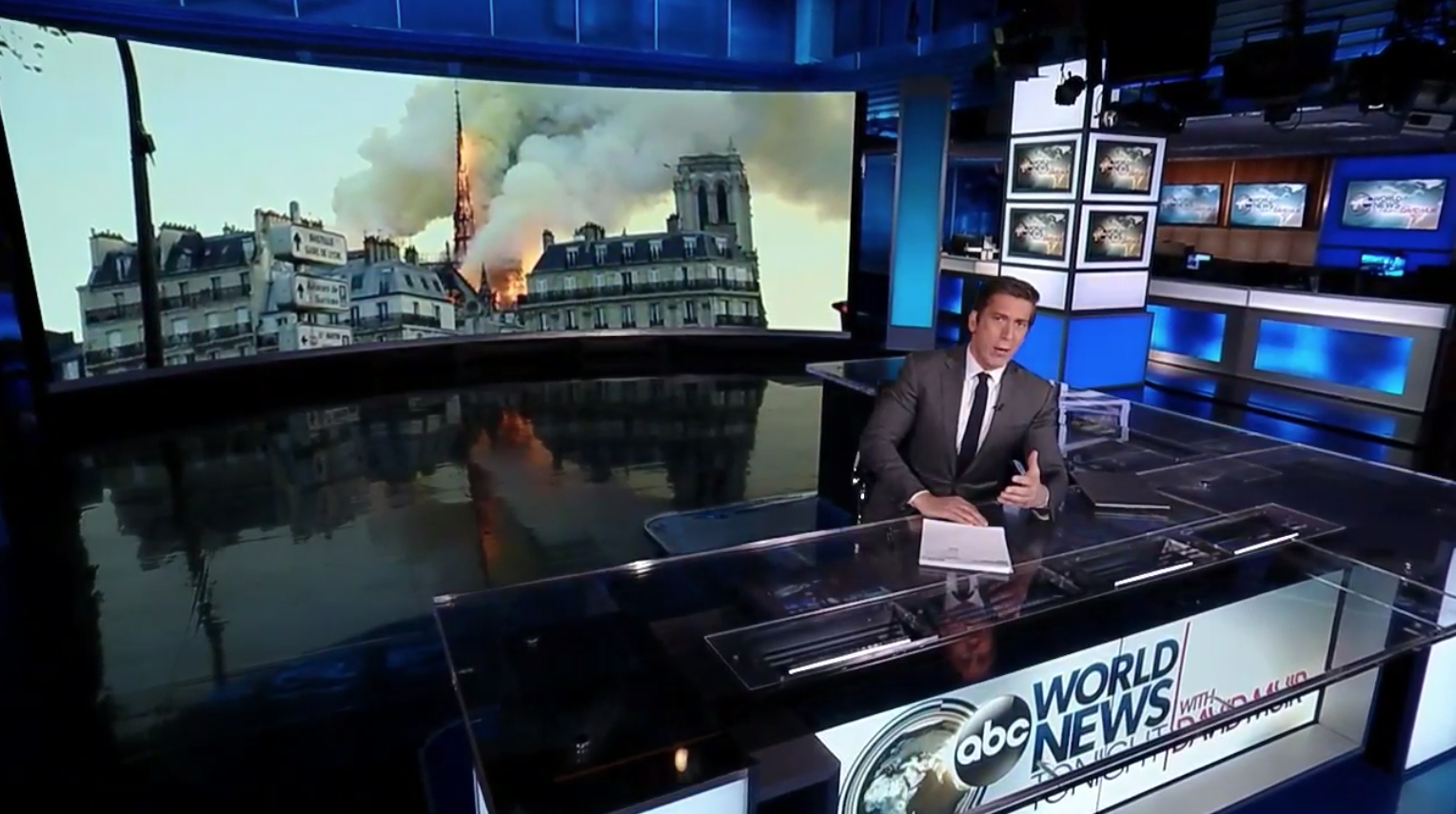 Muir then ended the broadcast with a package that used both history and updates about the fire. 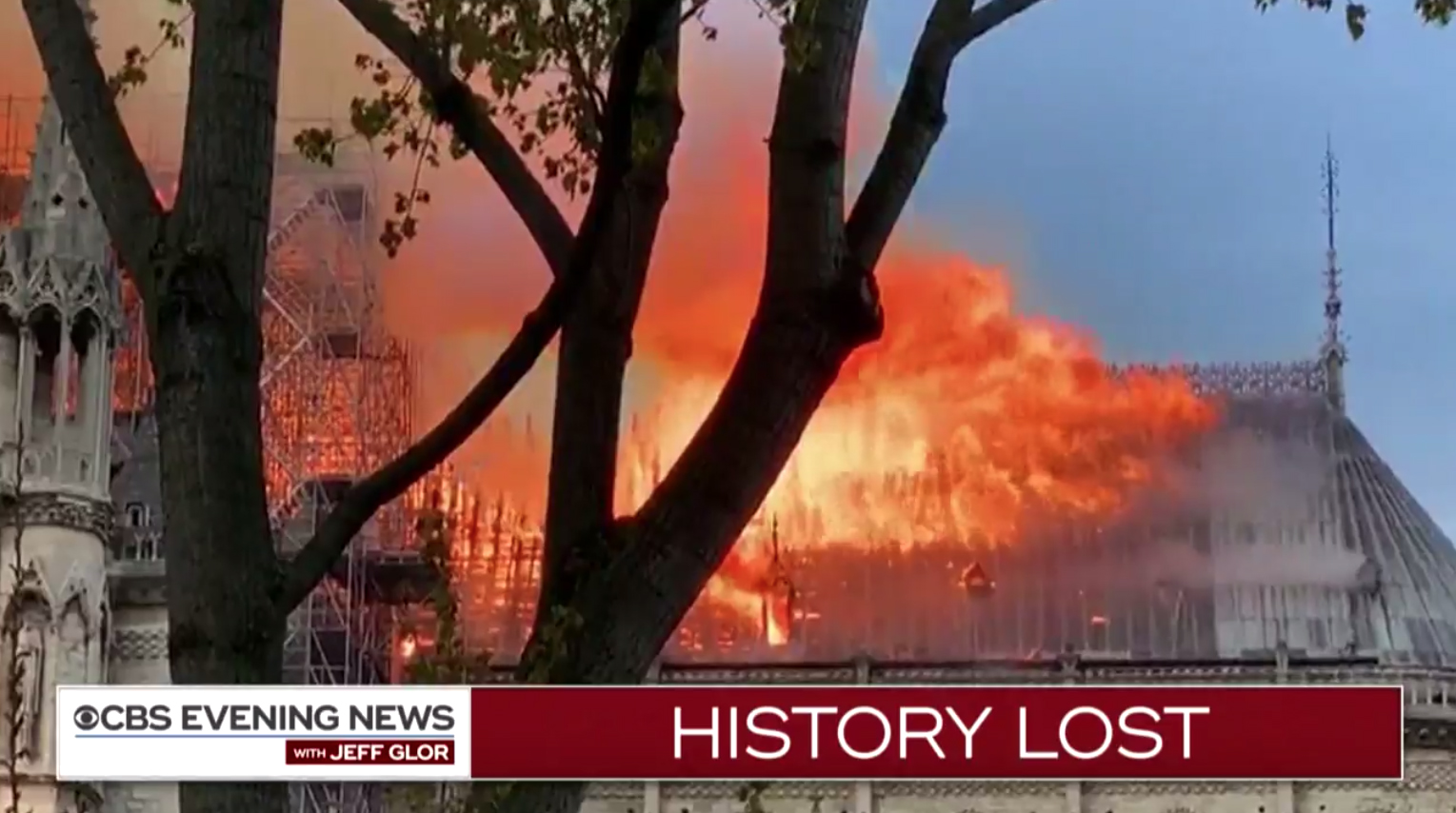 ‘CBS Evening News‘ used the banner ‘History Lost’ in its tease and the fire also was featured in its ‘headlines’ segment. 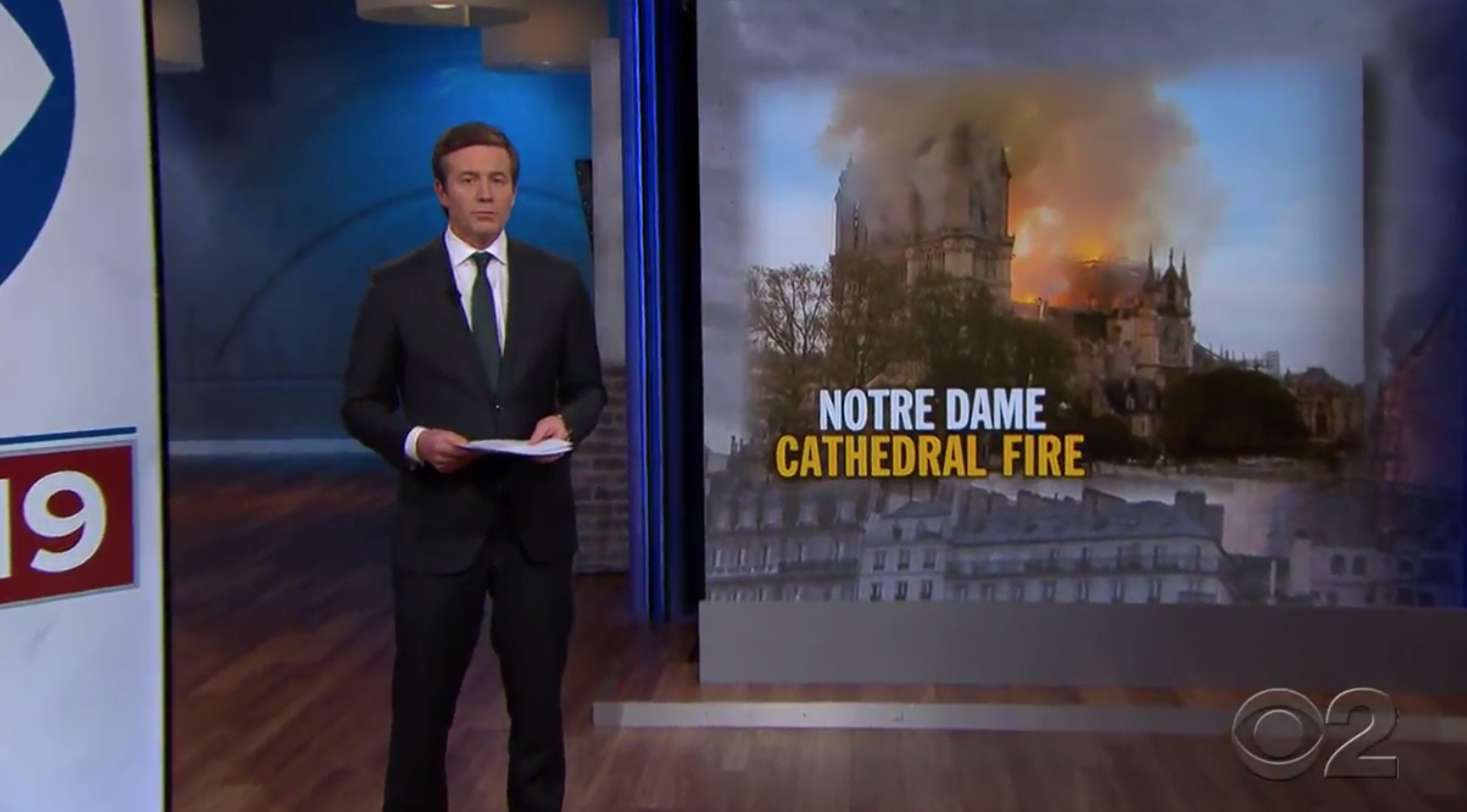 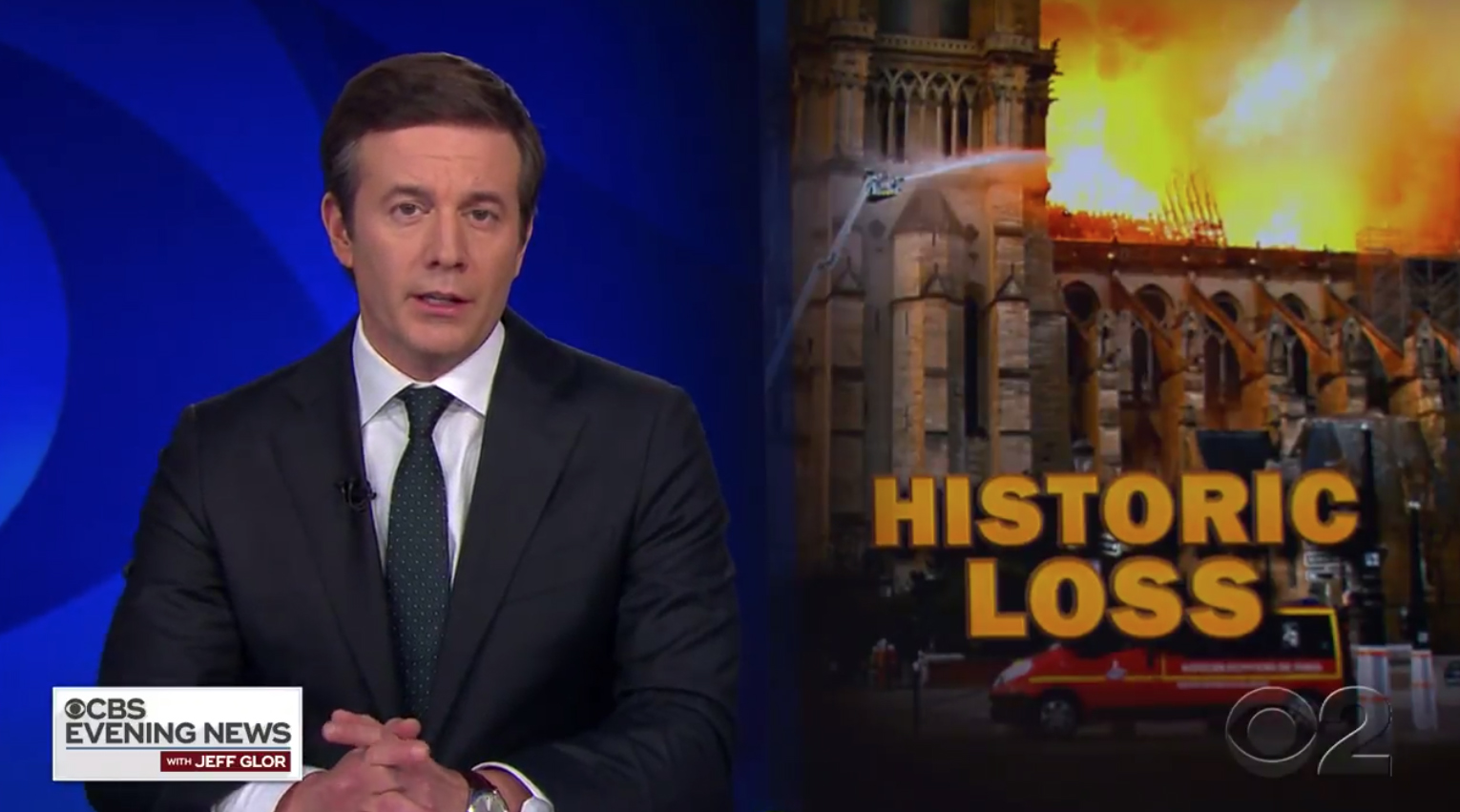 Carter Evans then contributed a retrospective package on the history and meaning of the cathedral, which included clips from both the 1939 movie ‘Nightly’ showed as well as the Disney version. Evans’ package included a reference unknown status to a thorn relic housed in the building, which had to be updated after his package aired to report that that item appears to have been saved. CBS also offered an update at the end of the broadcast.