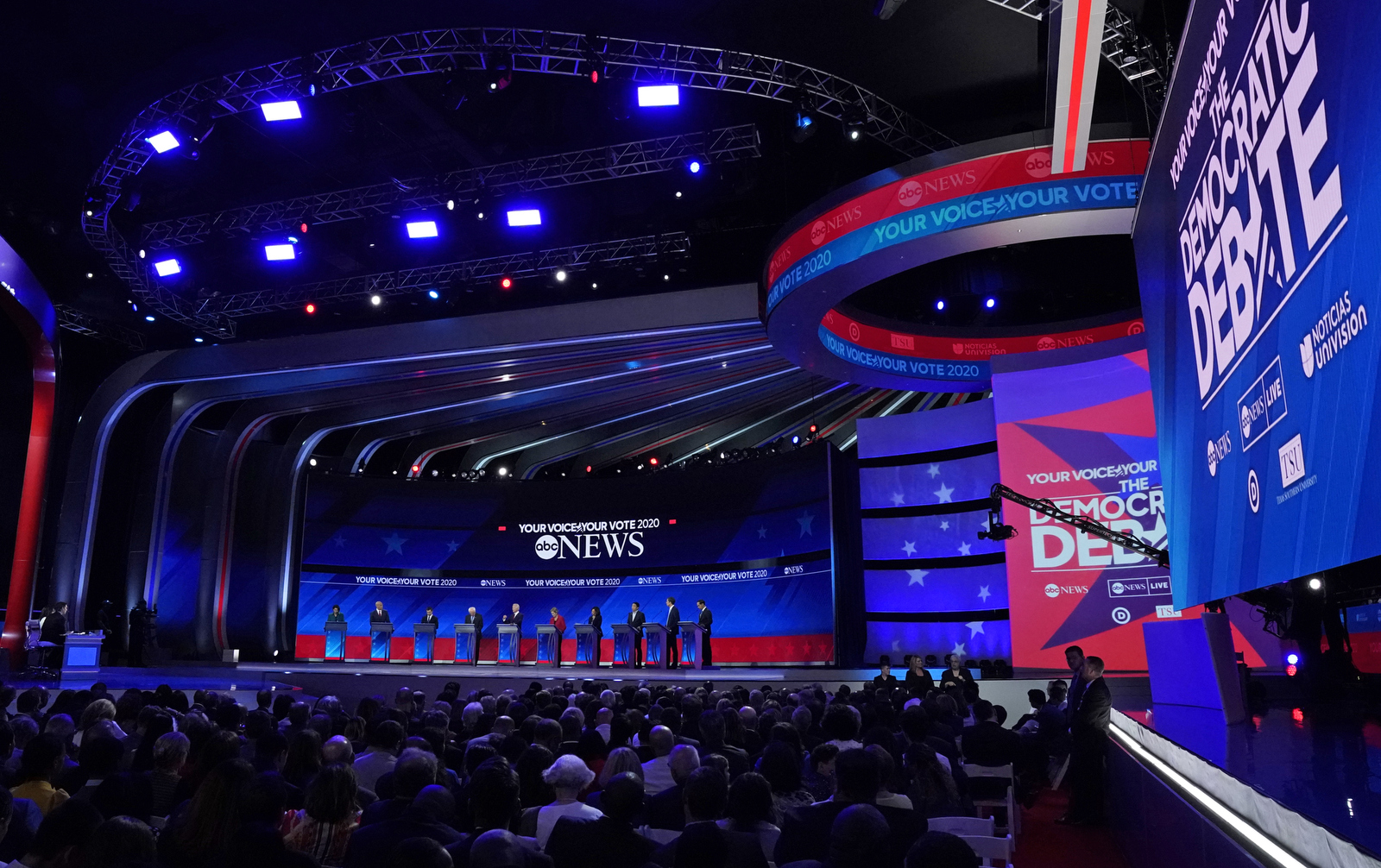 Located inside the Health & PE Center of Texas Southern University in Houston, Texas, the debate stage occupied what is normally a basketball court.

Using roughly 1/3 of the space, a variety of LED display technology and architectural elements were used to envelop the audience.

“The way I laid out the seating and staging I wanted it to feel like the audience was part of the scenery to some extent, that they were very much involved,” said Seth Easter, who designed the space. “I didn’t want the backs of our talent blocking the views of the majority of the audience.” 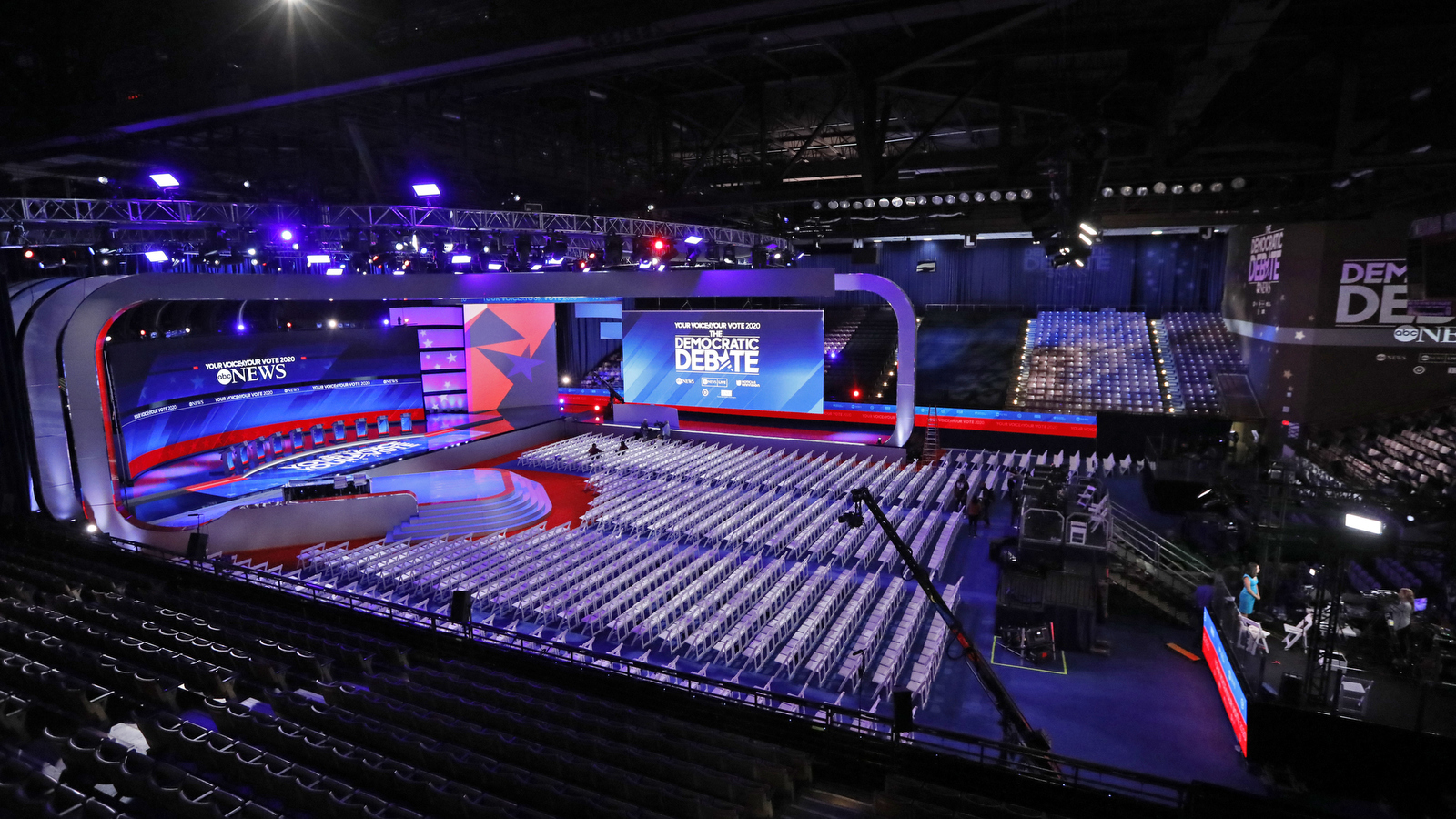 The overall debate hall inside the Health & PE Center at Texas Southern University. All photos courtesy of Heidi Gutman/ABC News.

Breaking away from the two previous Democratic debates of this cycle, ABC’s design focused on a more structural design for the debate hall, as the venue itself did not have a traditional stage but instead a blank canvas for a custom-built environment.

“I tried to go with something that’s more architectural,” notes Easter, “It feels more like an elegant space that can both shoot very large and small and intimate for the candidates themselves.”

“The set itself is not a full proscenium, instead it reaches out in two different spaces to hold the audience.”

Turning a gym into a debate hall

With a three week load in and over 20 tractor-trailers of scenery and staging elements, the end result is one of ABC’s largest undertakings.

“I think it’s probably one of the largest events we’ve ever done in terms of scale. It’s a scope that only comes every four years,” said Easter. 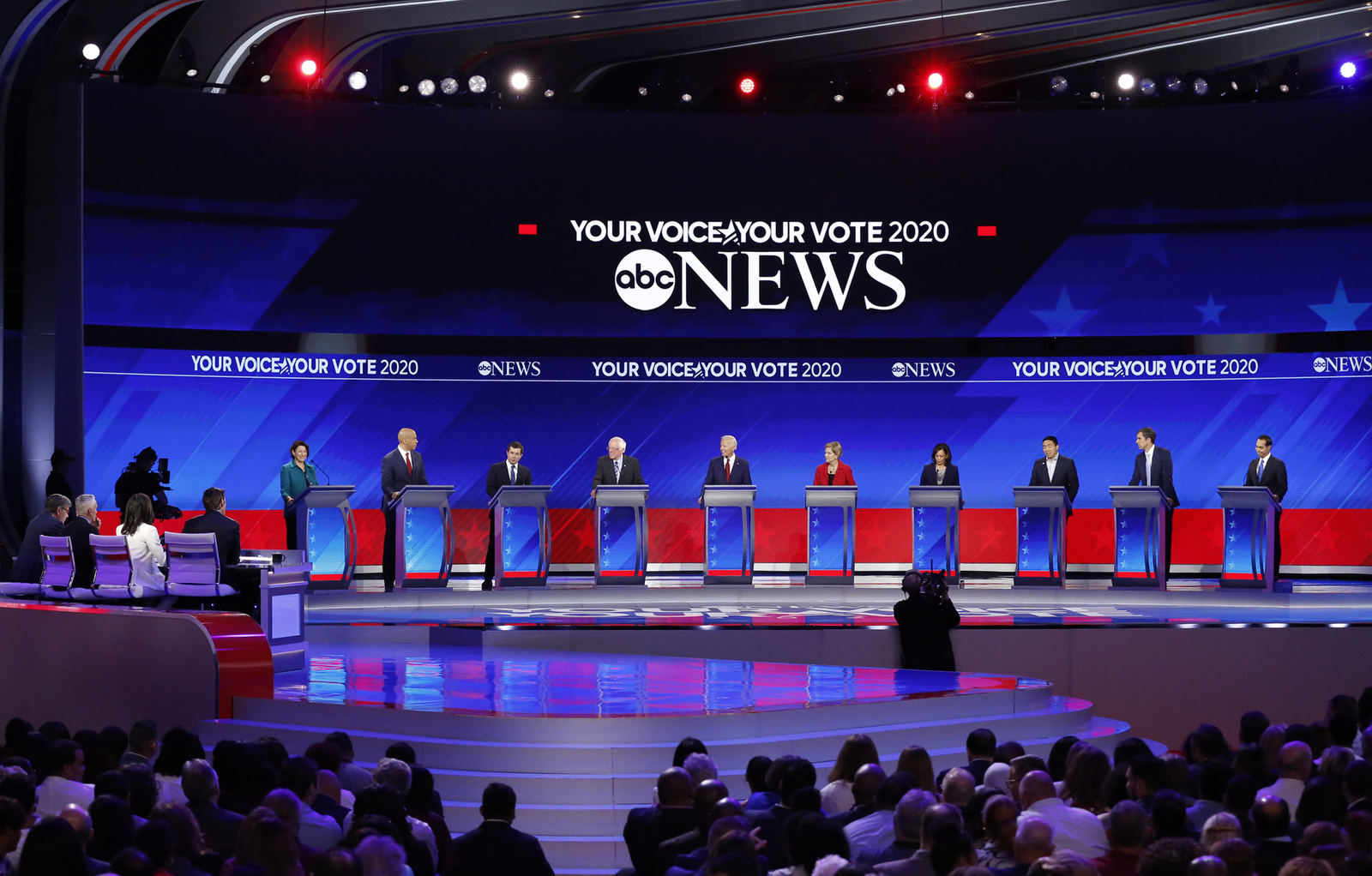 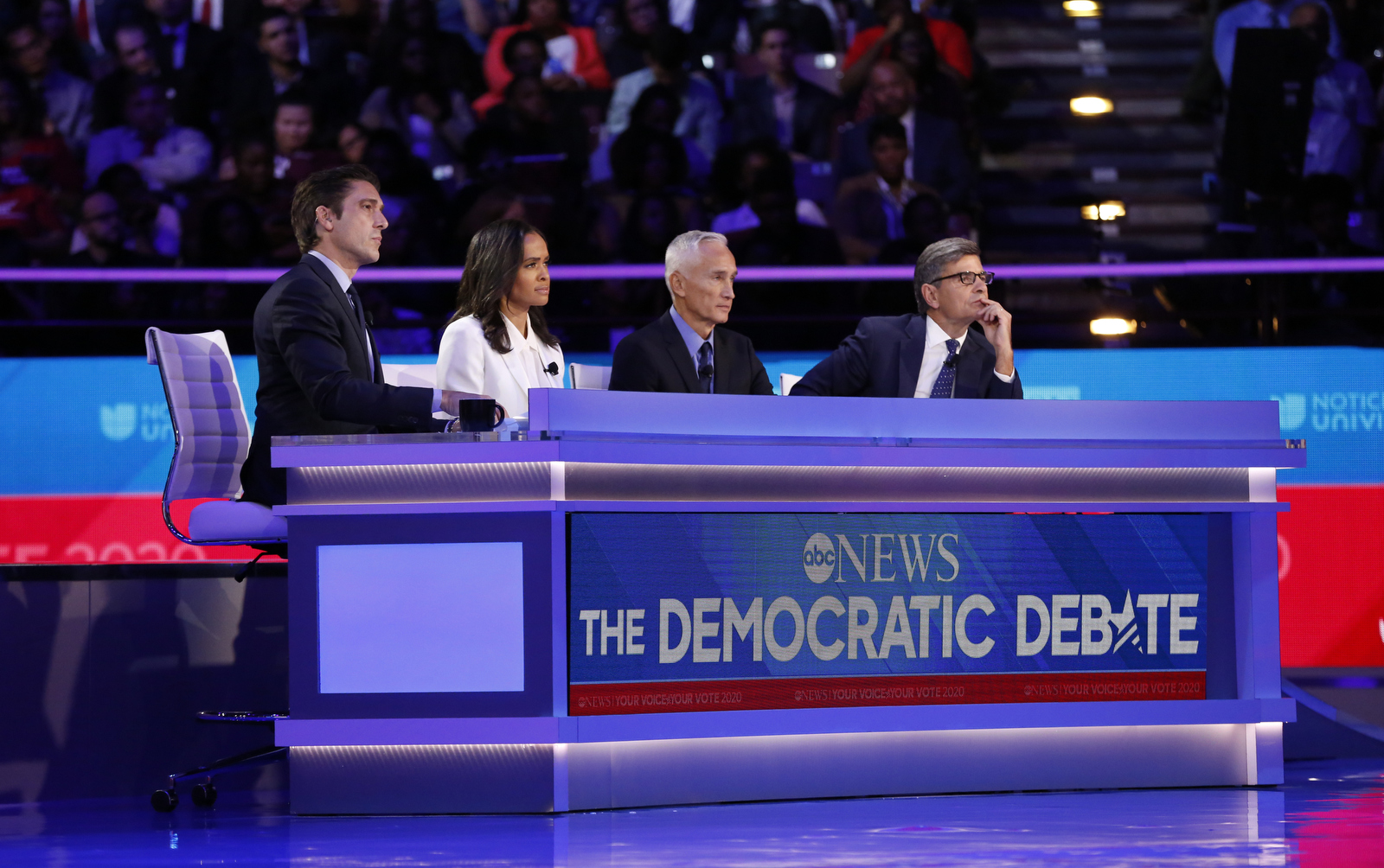 Behind the candidate’s lecterns, a curved LED provided the main backdrop with gentle angular animations while two large LED screens next to the stage provided opportunities for additional branding.

The set’s various screens, which included LED displays, traditional projection and even a floor LED, were handled by Fuse Technical Group, a company that has a history in the world of live event production.

For the screen control, a system that is typically used for entertainment or live events was used to manage the content across the various video surfaces.

“I wanted it to feel like they were having this debate in a room that held as much authority as the debate itself,” notes Easter. “We do definitely have a lot of screens and LED floors and multiple different surfaces, project and everything else, but at the same time it needed to feel more classy.”

With the polls shifting in the weeks leading up the debate, ABC was ready for a debate of up to twelve candidates on one stage or a smaller debate of only five. 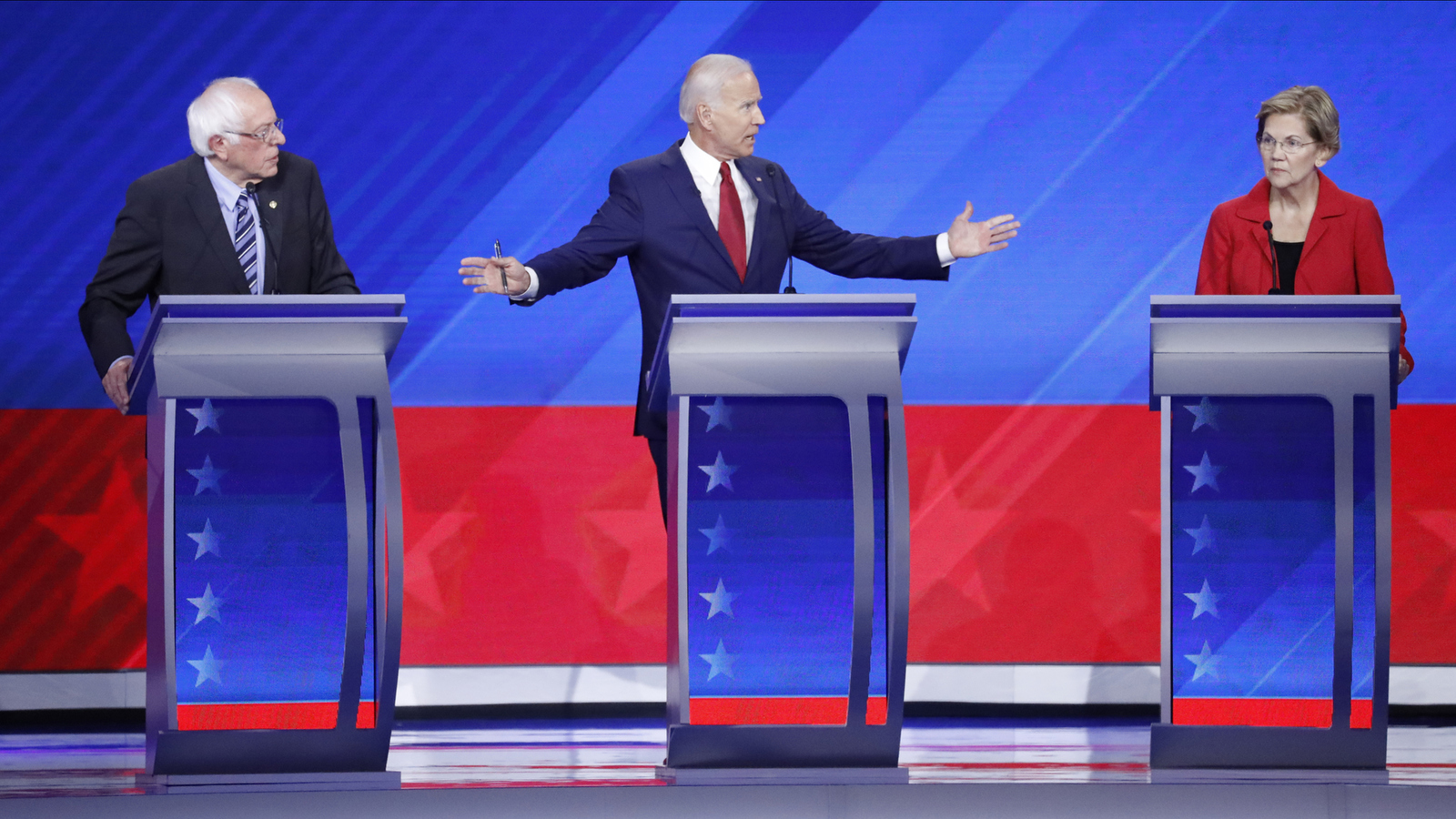 The design could easily accommodate both scenarios via a few quick changes to the scenery and through the usage of the video walls.

Lighting design for the debate was provided by Dennis Size of The Lighting Design Group. 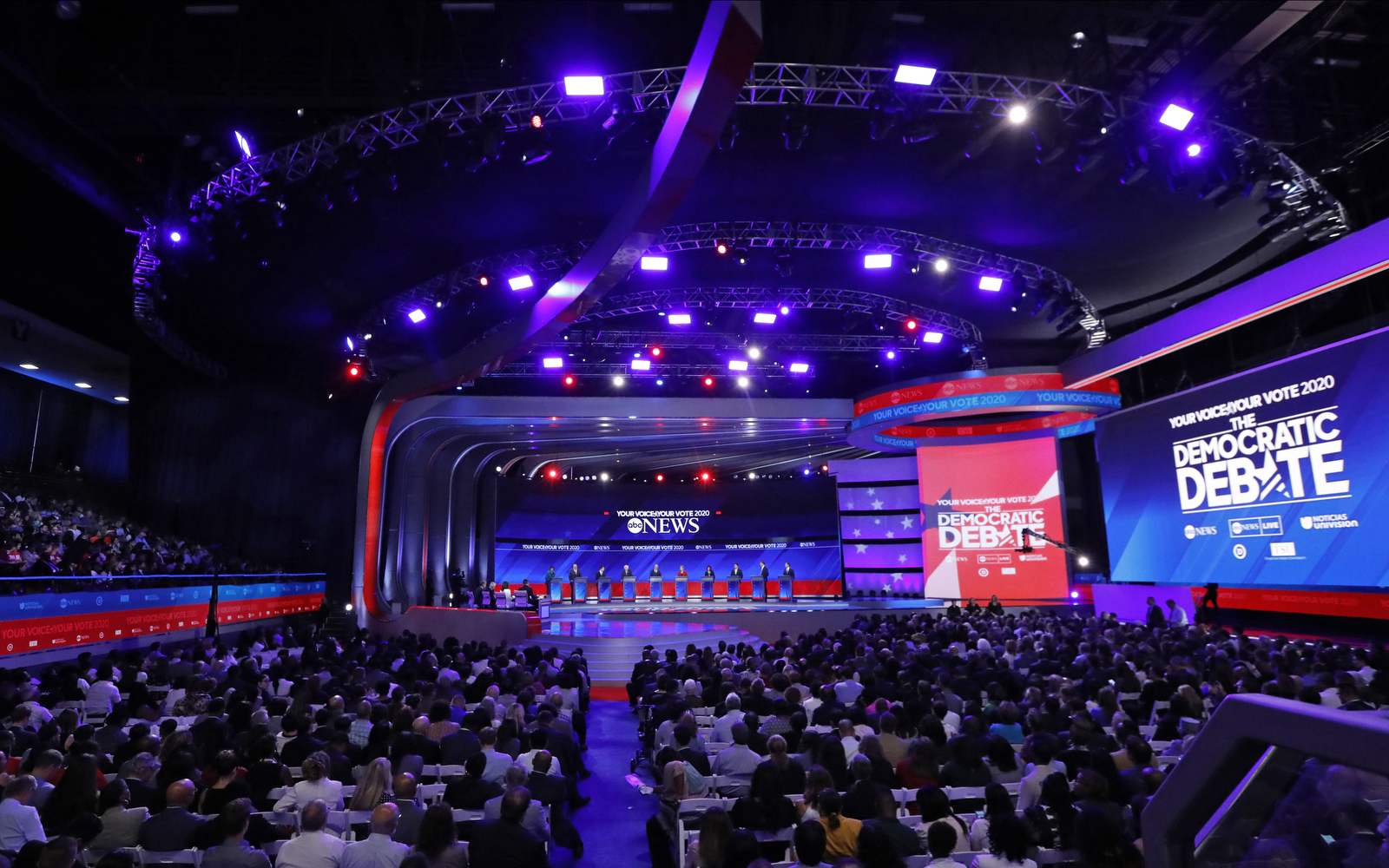 The light grid and stage inside the debate hall.

With a grid at 30 feet and the realities of a live production, most of the instruments used to light the space were moving fixture LEDs, while conventional fixtures were used primarily for backlighting.

19 cameras captured the debate from inside the hall, including two Technocranes and two tower cams along with a full set of cameras in the spin room nearby.

The entire event was produced out of one production truck with ABC’s New York headquarters providing some production assistance.