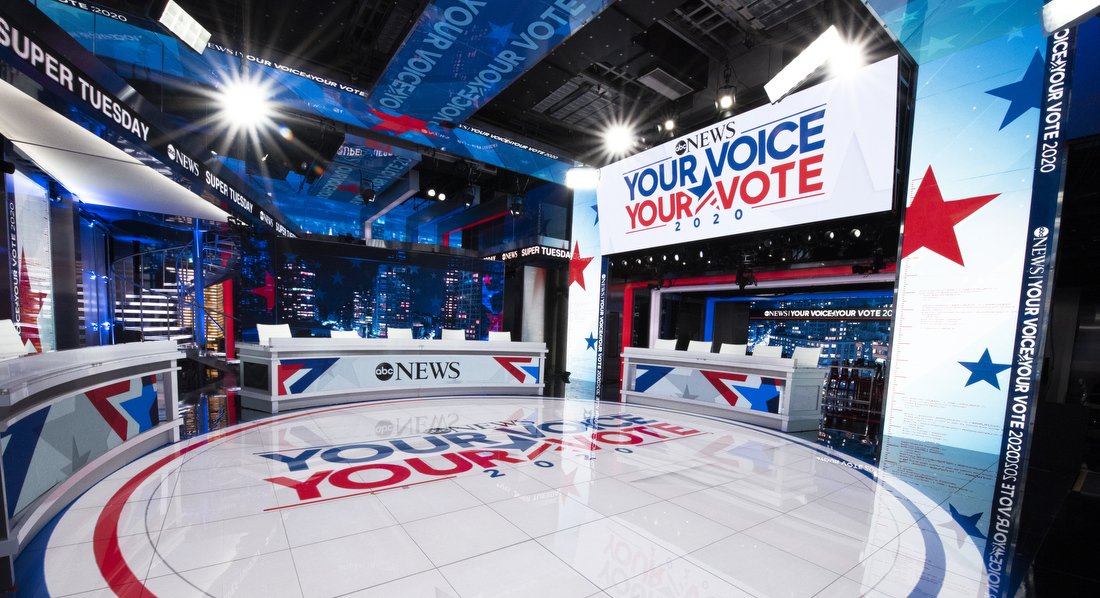 ABC News will launch a massive overhaul of one of its primary news studios for Super Tuesday coverage tonight in primetime — but the look will stick around well after that.

The new set, inspired by the circular set the network used during its 2018 midterm election coverage, is stocked with plenty of LED video walls and panels.

Around this time last year, the network began discussions about what the 2020 election coverage would look like and ABC News president James Goldston asked about creating a look similar to the midterm set that could be used not only for the high profile election but also across all ABC news platforms. 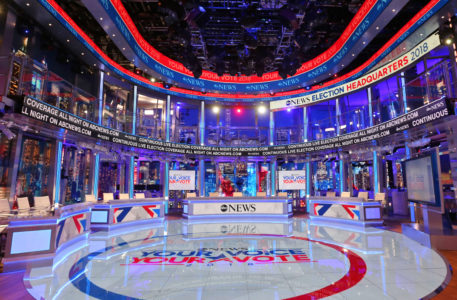 “We wanted to create something that really showcases all of our information and editorial opportunities for our broadcasts,” said Zach Toback, vice president, news and non-fiction production and studio operations.

Senior Production Designer Seth Easter told the team he had an idea for making the 2018 set fit into the smaller space of TV3, which was, at the time, about 3,000 square feet.

“There’s no way it can fit” was Toback’s initial response, he recalled.

However, Easter promised he “had an idea” on how to make it work and went into his CAD software to prove that, with some renovation to the building, he could get TV3 up to about 5,500 square feet.

Ultimately, the project got approval from Disney in July 2019 and construction work started in October.

The space was last fully renovated in 1986 when Peter Jennings was still the anchor of “World News Tonight” and crews found layers of old sets while prepping the space.

The project ultimately involved not only gutting the space but removing the lighting grid and dimmers and updating the HVAC and electrical infrastructure to accommodate the demands of the technology-heavy new set. 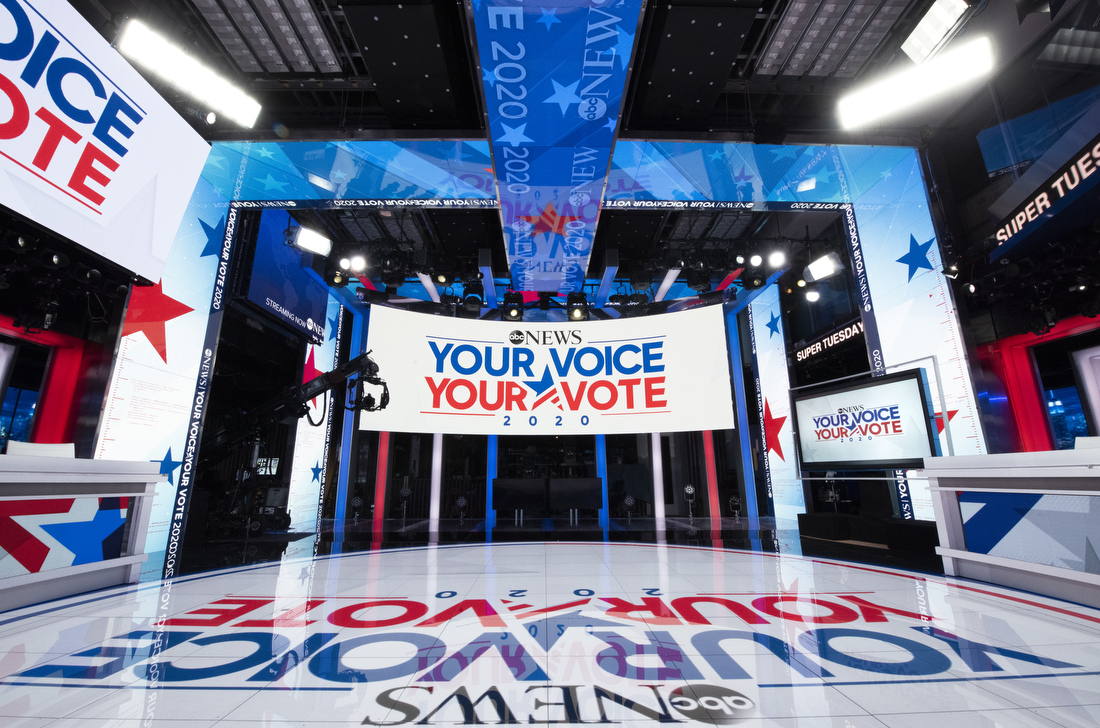 The result is a wraparound set similar to the 2018 election space that uses plenty of LED backgrounds and video ribbon “archways” that create a dynamic, flexible look that will make it flexible enough to be used across all ABC News platforms.

The desks were saved from the 2018 studio, though they were retrofitted with upgraded LED panels.

Along the east wall is a floor to ceiling LED video wall created using panels of two different resolutions separated by a metallic header.

There are also L-shaped lightboxes peeking through the scenery here, inspired by the camera center background at the network’s Times Square studios for “Good Morning America.”

“There’s definitely some basic design vocabulary that’s utilized from ‘GMA’ so all of our shows have some synergy,” said Easter.

Those strong right angles are carried through with additional internally lit, color-changing frames that arch over the studio floor as well as dramatic vertical video ribbons that continue on the horizontal axis overhead.

Intersecting above the studio are ceiling mounted LED panels installed below the grid, an element that was also used, in a slightly different format, in the network’s 2016 election set on the second level of the “GMA” studio. 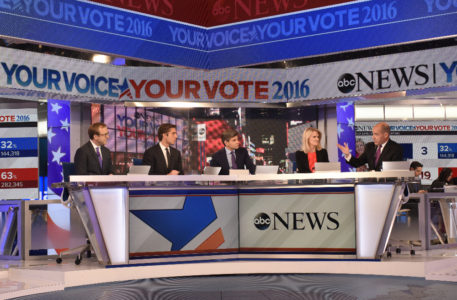 These are complemented with LED tickers that, thanks to careful placement, allow text and graphics to zip around separately from the other LED surfaces, including a band installed on the front of the functional balcony that’s reached by a wide spiral staircase and also accessible from the fourth floor of the facility.

Another big update to the space was swapping out the circular floor decal, which ABC used augmented reality on during the 2018 election, in favor of LED panels.

The new studio is still AR ready — and you can expect to see that during Super Tuesday coverage.

Opposite the east wall is an area with a curved video wall that can be raised and lowered.

During election coverage, it will typically be parked in the “up” position, allowing space for shooting talent on set, but when lowered it will allow the network to use it as a more traditional video wall backdrop with a hard scenic wall above.

Another video wall in the new studio is hinged to allow for both accessing storage behind it and to create different looks for the space.

All told, there are over 28 separate LED elements with over 35 million pixels in total.

In addition to the LED video panels, the space has also been switched over to completely LED lighting instruments.

The space has also been designed with an enclosed area, dubbed Studio TV3B, that will serve as a space for ABC News Live, the network’s streaming OTT service.

Separating the space allows the network to support simultaneous broadcasting within the overall footprint of TV3, a key part of its multiplatform strategy. 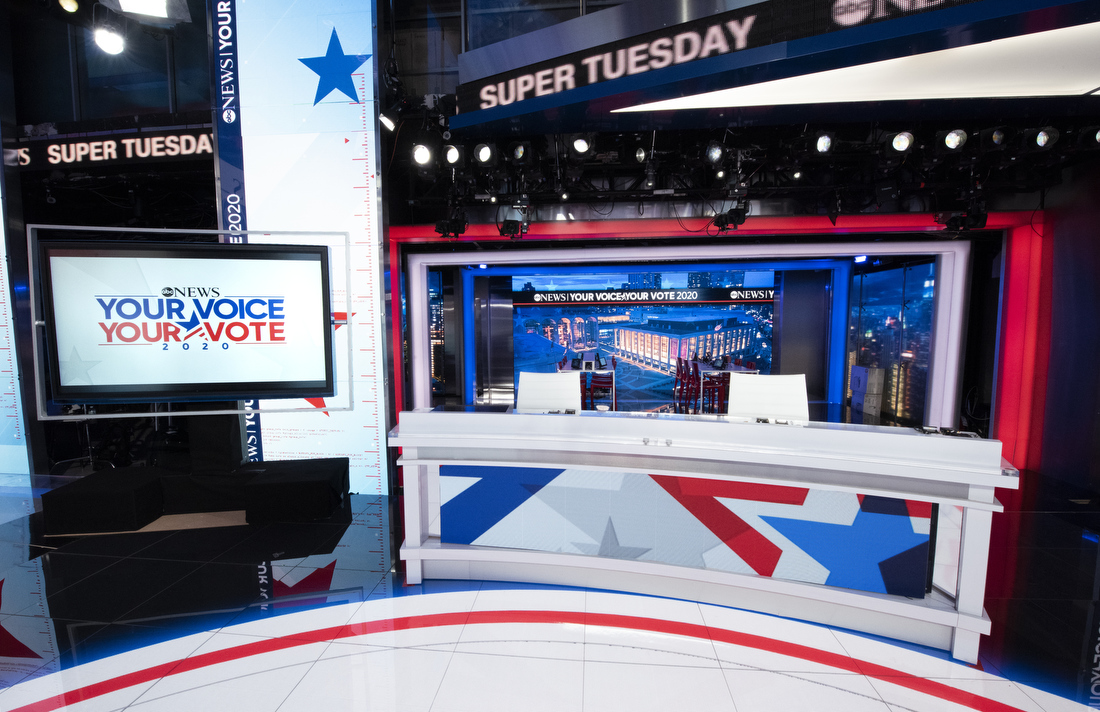 After its Super Tuesday primetime debut, ABC will begin the process of transitioning “ABC World News Tonight,” “World News Now,” “America This Morning,” “Nightline,” “GMA Weekend” and the NYC editions of “This Week” into the space.

“This project is unique in that it was purpose-built for Super Tuesday but also for all our other shows,” explained Toback.

The network is planning to make these decisions deliberately, allowing each show to block out shots within the space and ultimately determine the look and feel of their show.

Its flagship “World News Tonight” is expected to retain a look similar to what it’s been using for years — a large video wall for topical graphics behind anchor David Muir.

“We wanted to build something that will allow us to grow … and work across multiple platforms” added Easter. “It’s designed to be future proof.”

Some of that “future-proofing” is that ABC can take much of the technology with it when it moves to Hudson Square in a few years.

“This was obviously a very large investment … and one of the details of getting that approved was that the technology can be moved,” said Toback, who pointed out that the LED lighting fixtures will likely end up in the new building.

All told, the redo of TV3 took over 12 months of planning, renovating and construction.

“It was an incredibly exciting project. A lot of people worked on it for a very long time,” said Toback, noting that many members of the team have been hard at work around the clock for weeks. “It’s very exciting to be able to showcase all of the technical and creative talents at ABC News.”