Spacing out: How networks are socially distancing election sets 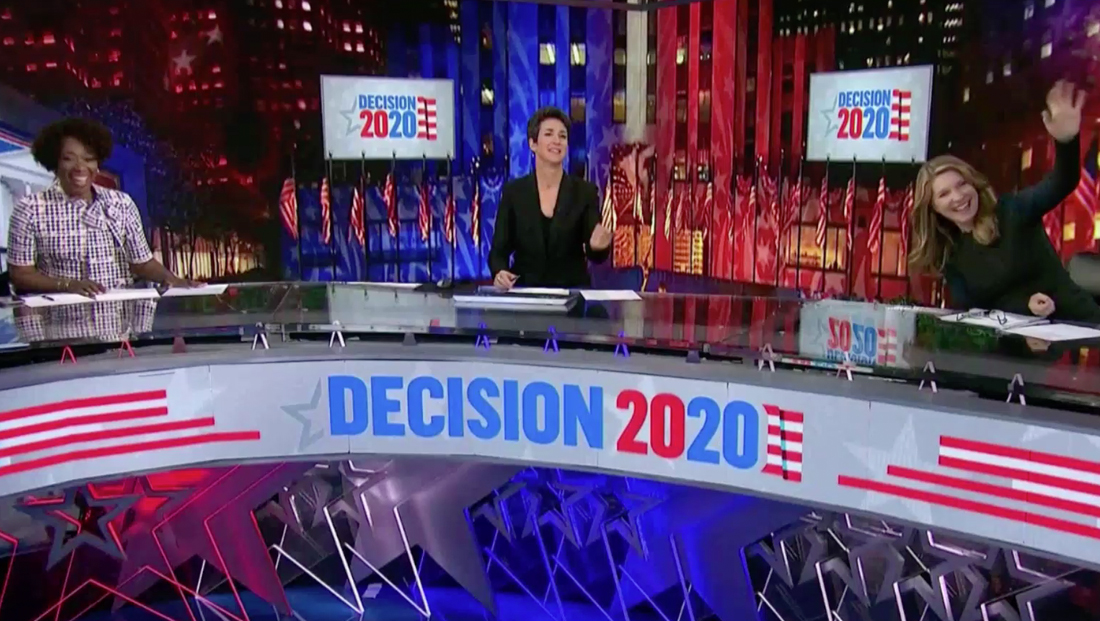 Don’t expect to see much of that this year.

Thanks to the spike in coronavirus cases, networks have been carefully planning how to position talent and behind the scenes crew for election night coverage — one of the biggest nights in TV news and one that typically requires a massive coordination of people power.

With the reconstructed and expanded Studio TV3 that debuted for Super Tuesday, ABC News has already been able to significantly spread out in-studio talent across the multiple curved desks that can be arranged in a circular layout.

TV3 also has the advantage of having two separate “alcoves” that are relatively isolated as well as the so called TV3B, though it’s not clear how or if those spaces will be used.

Sources also say the network has redressed the set of “The View,” which is in the same complex at TV3, and will use that for additional commentators. 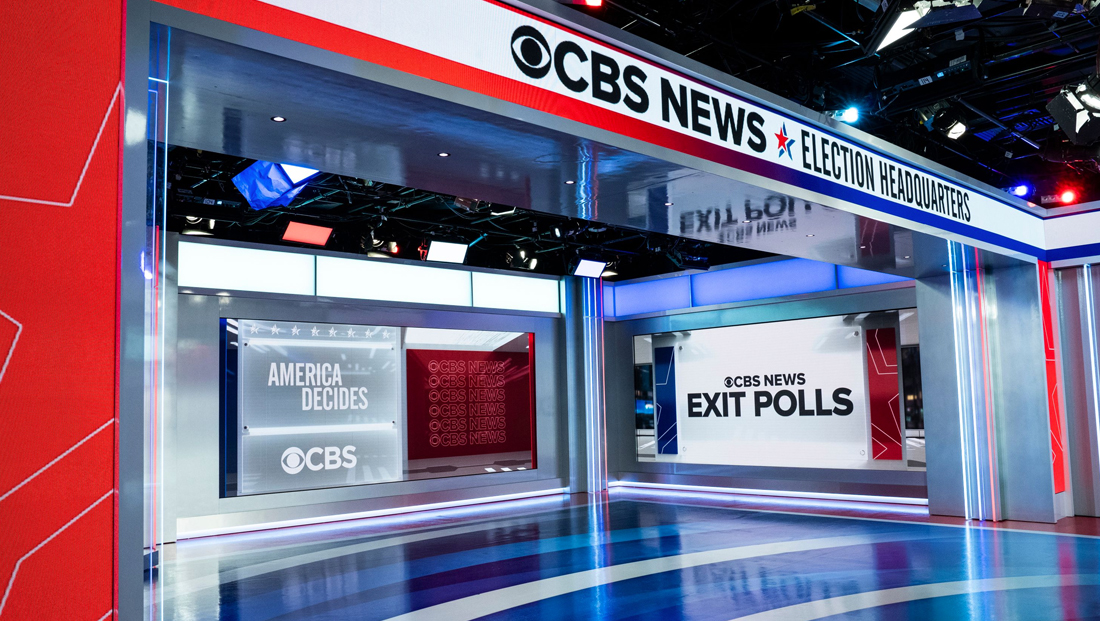 CBS News built a fairly large studio and workspace inside the ViacomCBS building in Times Square that includes a recycled anchor desk with add on “extensions” for the primary talent pool to spread out behind it (instead of Gayle King and John Dickerson sitting in somewhat awkward positions at one end of the “CBS Evening News” anchor desk in Washington, D.C. during debate coverage earlier this year).

The CBS studio includes built-in workstations as well as two “wings” of the studio, once of which will be used for exit polling. This will also allow talent to report from these locations with cross shots to showcase the “team” nature of coverage, but still remain socially distanced.

CBS, like other networks, is also spreading out control room usage across multiple locations with the main control room for election night at its headquarters on 57th Street. 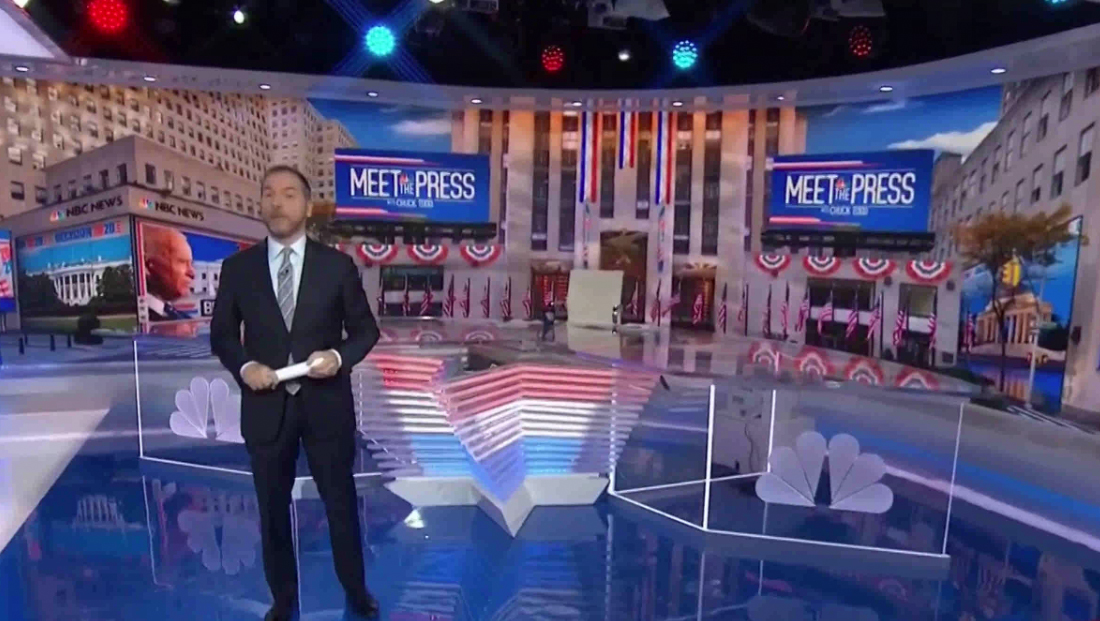 Home base of NBC’s election studio that debuted on ‘Meet the Press’ with Chuck Todd (pictured) Nov. 1, 2020.

The network also added a wall that sort of divides the video wall and production part of Studio 1A from the normal “Today” home base and the Orange Room area, which has traditionally been converted to small workstations and standup areas in past elections.

MSNBC is, like it has done for convention and debate coverage, having Rachel Maddow, Joy Reid and Nicholle Wallace set up in the corner video wall alcove of Studio 3A. 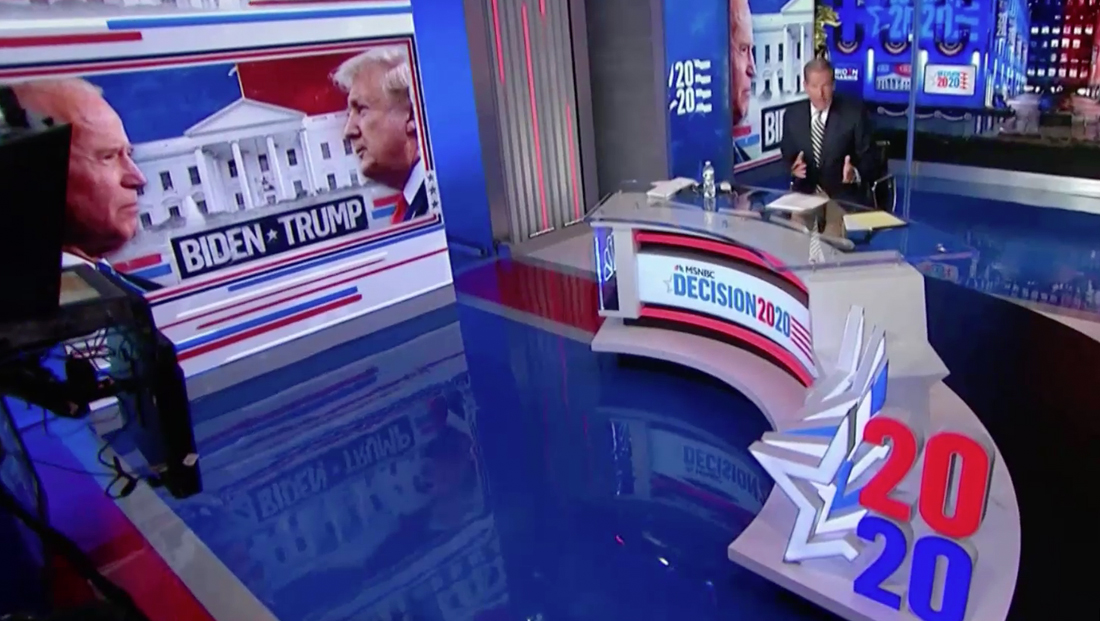 Brian Williams will anchor from the vista wall alcove in adjacent Studio 3C, normally home to “NBC Nightly News.” Steve Kornacki has a touchscreen standup area located that faces the main anchor area but is socially distanced. NBC also has multiple “news nook” studios and other, less elaborate spaces, as well as its newsroom set Studio 4E that can be used as additional locations for guests across all of its properties.

The four anchors had a bit of fun trying to wave to each other during special “countdown” coverage on Nov. 1, 2002.

Studio 3C has two walls of glass that overlook Studio 3A, though one is currently blocked by an oversized LED video wall temporarily installed.

However, it appears the anchors could still see each other through the glass wall with analog locks showing the time around the globe that sits between the two spaces.

CNN plans to have talent in both New York and Washington, D.C., with the “main” anchor team in NYC. 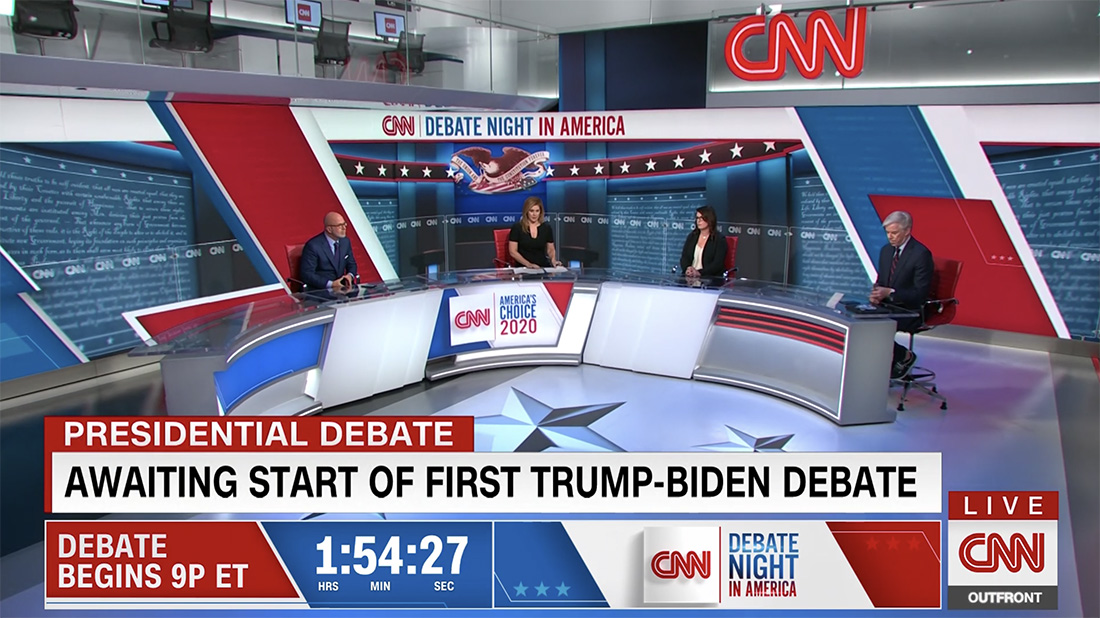 A CNN studio during the first presidential debate.

As with debate and convention coverage, viewers can expect to see anchors spaced out across multiple studios, according to sources — a fairly easy feat since most of the Hudson Yards studios share a design language and can leverage massive seamless video walls as backgrounds to create coordinating looks.

Fox will broadcast from Studio F, the two story space that debuted for the 2016 election and continues to be home to many of the network’s key programs.

The space is fairly large and also sports a mezzanine, as well as multiple options for standups and desk positioning so likely, can have talent spread out in different parts of the studio.

Fox also has the large, multi venue Studio J as well as Studio N, a smaller but enclosed space overlooking the network’s main newsroom that could be options for positioning other talent across its multiple platforms.