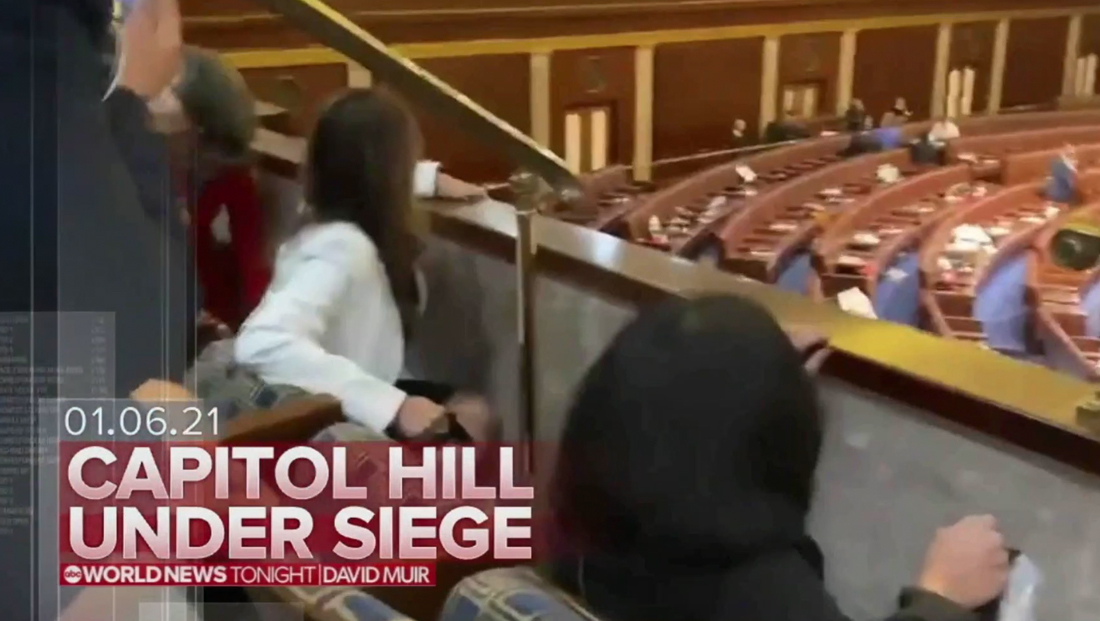 On the busiest news day of the still young year of 2021, networks were forced to adapt their evening newscast formats in order to continue providing live coverage.

In most markets, ABC, CBS and NBC were already on the air with special reports after pro-Trump extremists breached the Capitol, inciting chaos and violence.

They had, in turn, previously broken in around 1 p.m. eastern to cover the certification of electoral votes that would officially make Joe Biden president-elect and cement Donald Trump’s loss for a second term in the White House.

It was those proceedings, along with Trump’s own words, that sparked the assault on the Capitol.

ABC News was unique in that it was the only one of the “big three” networks to use its normal tease headlines and open in full.

Chief anchor George Stephanopoulos had been anchoring rolling coverage from the main part of TV3.

Both CBS and NBC both took brief pauses to transition from rolling coverage at 6:30 p.m.

NBC dropped its normal “NBC Nightly News” open in favor of its special report open — likely so the feed could be carried nationwide, including in markets that wouldn’t normally carry “Nightly” at that time, with mostly NBC News and special report branding.

Anchor Lester Holt kicked off the bottom of the hour with what headline-style teases, though the network appeared to experience two technical glitches involving its media servers that caused generic blue slates to appear on screen during this intro.

Another glitch caused an empty chair in Studio 1A, where Holt was co-anchoring special coverage with “Today” anchor Savannah Guthrie, to appear in a two box.

NBC kept the special report graphics up during the entire half hour.

On CBS, anchor Norah O’Donnell simply paused for a few seconds at 6:30 p.m. and announced a “special edition” of “CBS Evening News.”

The network also used a slightly modified version of its special report graphics that added the “Evening News” logo.

Spanish language Telemundo took a brief break from its ongoing coverage for an announcer to narrate a cold open but then continued with rolling coverage in place of a typical edition of “Noticias Telemundo.”