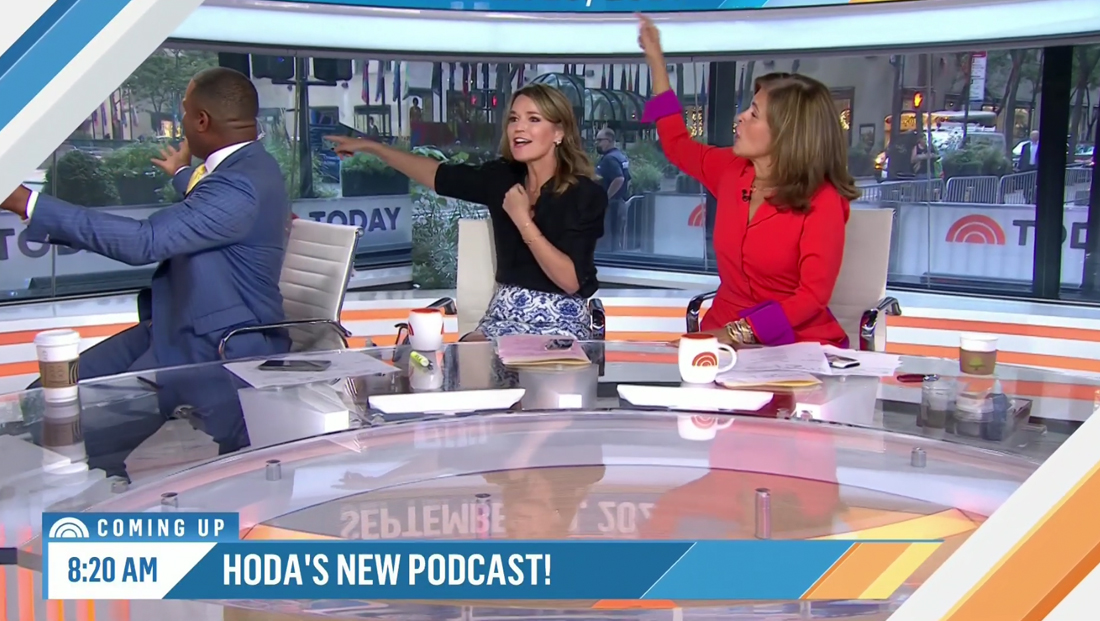 The “Today” windows on the world gave viewers a bit more than they bargained for this morning when a naked man ran ran past the glass that wraps the show’s main anchor desk.

Editor’s note: This story’s images and accompanying video show a naked man running past the “Today” studio, but his the lower portion of his anatomy is not discernible.

“Today” was returning from a break at about 7:53 a.m. eastern for the “interstitial” right before local cutins, when anchors Savannah Guthrie, Hoda Kotb and Craig Melvin were all caught on camera turned around looking out over Rockefeller Plaza behind them commenting that there had been a naked runner in the background.

That’s when the runner decided it was time for another round.

“He’s back!” said Kotb, apparently seeing it on a return monitor in the studio.

“Where are your clothes?!” yelled Guthrie and Melvin shouted “What are you doing?!” before the control room smash cut to a break.

The show returned to the tease it was offering at that time, concerning Kotb’s new podcast, later on.

The incident was not edited out of the central time zone tape delay, likely because the lower part of the man was mostly covered or indiscernible.

In reality, very little of the man was visible below the waist, thanks to the conveniently (strategically?) placed “Today” branded movable “fencing” that are typically set up behind the area visible behind the anchor desk, which sits in the corner of Studio 1A overlooking a public street and pedestrian area.

There was a brief gap in the solid or translucent graphics that cover the fencing that could have revealed more than it did.

The one place that man could have, perhaps, given viewers an even bigger “treat” was on the LED panel installed int he corner of the studio, camera center of the home base two shot, that can display branded and topical graphics as well as a live feed from a camera mounted behind it, an attempt to create an illusion that the structural pillar there isn’t actually there.

The effect works best when it’s a simple straight on two shot, and since the show was on an off-axis three shot at the time of the incident, the image on it didn’t match up well with the real background.

In this modified image, the approximate area outlined in red is not actual glass, it’s an LED column behind fed a live feed from a camera mounted in the header just behind it. If you look closely, you’ll notice some of the features on the plaza behind it don’t quite match up because of the difference in angle between the camera capturing the live feed and angle of the camera shooting the anchors.

Instead, only the man’s face was visible on the panel in a brief blur just over Guthrie’s shoulder, as shown in the image above.

By having windows open to a public space, Studio 1A and other streetside studios could potentially always be subject to this type of incident.

Back in 2013, a man reportedly stabbed himself in the area near the “Today” studio. The incident was not caught on camera but the show did shift an outdoor segment inside and raised the blue background that, at the time, could be used to cover the windows (when “Today” first moved in, the show typically started with the windows covered and a blue “Today” branded background behind the anchors).

Ahead of the George Floyd trial verdict in June 2020, NBC also covered the windows with a temporary scaffold like structure as a precaution against any violence.

When NBC used Studio 1A as its election headquarters in November 2020, the network brought in hard scenic elements that covered many of the windows in the space.

It also brought in a freestanding video wall that created a mostly walled in space for the anchor desk, which was set up in front of an existing interior video wall.

The “streaking” incident comes exactly one week after “NBC Nightly News” moved to Studio 1A permanently. This broadcast largely avoids using the windows, with the notable exception of the so called “production area” that features motorized LED panels in front of a long span of windows overlooking a street that’s open to the public.

Because of the dual layers of reinforced exterior glass and an angled, light filtering one, the actual streetview outside of this area isn’t quite as obvious as the corner area.

Across town, WABC’s windowed studio was damaged back in September 2020 when a man allegedly threw rocks at it.

Windowed television studios are typically protected with a variety of security measures, including bullet proof or reinforced laminated glass. Many have a second layer of angled glass that helps avoid glares from interior lighting while also protecting the studio and equipment from the sun.

It’s also common for law enforcement and private security to patrol the area outside of these types of studios.