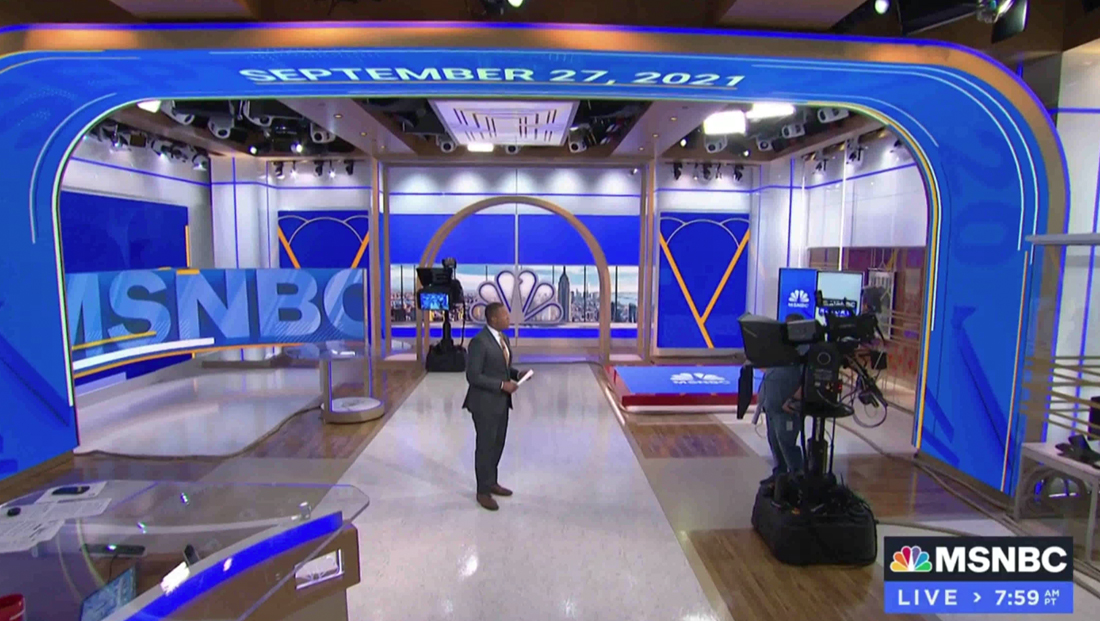 “Craig Melvin Reports” became the first iteration of “MSNBC Reports” to originate from the newly renovated Studio 3A in Rockefeller Center that made its debut Sept. 20, 2021.

The Sept. 27, 2021 edition of “Craig Melvin” is part of a series of rolling news coverage blocks formerly known as “MSNBC Live” but rebranded as “MSNBC Reports” in late March 2021.

The rebranding also included the introduced of new graphics across the entire network, including a blue, white and yellow look for “Reports.”

At the top of “Reports,” the network gave viewers a wide view of the space, which has multiple LED video walls and ribbons, decked out in matching on set graphics and dramatic coordinated animations as well as bold blue reveal lines in the header and column elements. 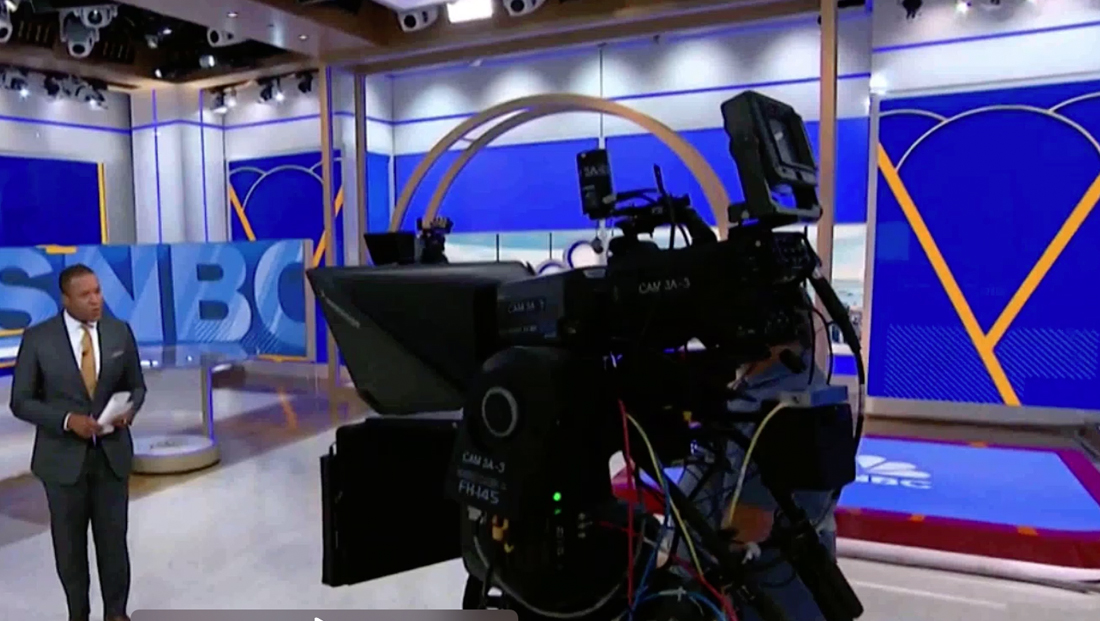 Many of the panels were filled with blue background with white and yellow accents, including diagonal, intersecting lines that formed a suggestion of the NBC peacock “feather” shapes and curved, art deco style accents in thinner white lines evocative of the feathers’ tips.

The data was dramatically shown on the ceiling mounted LED panels that form an “archway” of sorts that stretches across the space and topical on set graphics were featured on multiple arrays.

The curved video ribbon and corner video wall installation could be used for “video on video” floating camera shots while virtual set extensions similar to the ones used on “José Díaz-Balart Reports,” which debuted from Miami the hour before Melvin. 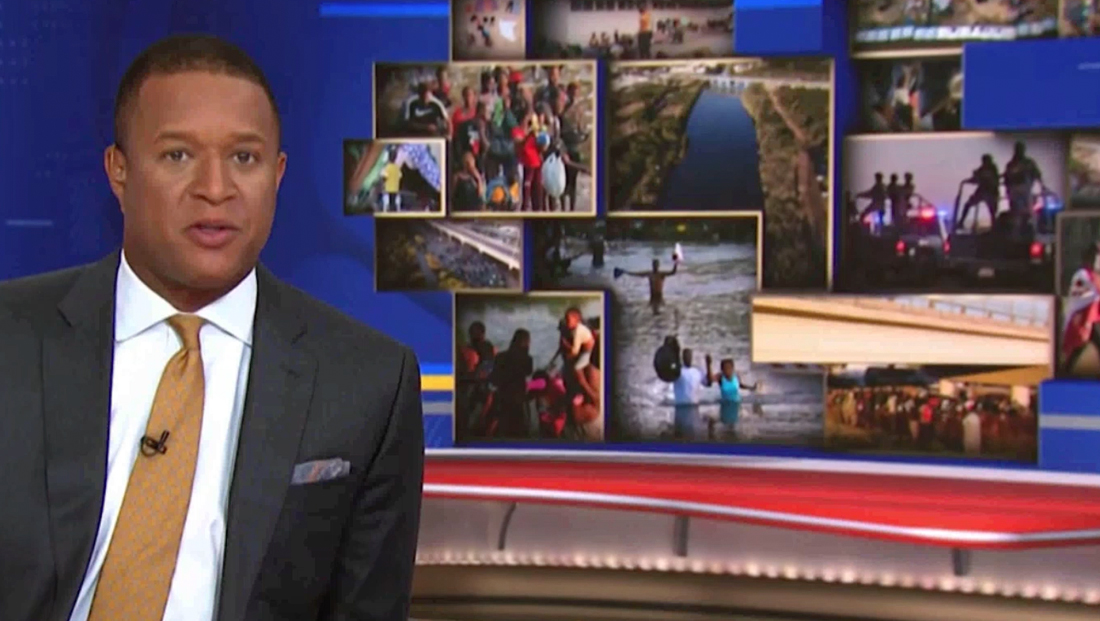 Like the ones used behind José Díaz-Balart, the set extensions featured structural elements and simulated video wall and ribbon elements that could be generic or topical. Graphics were sometimes arranged in a collage style or inside angled accents. 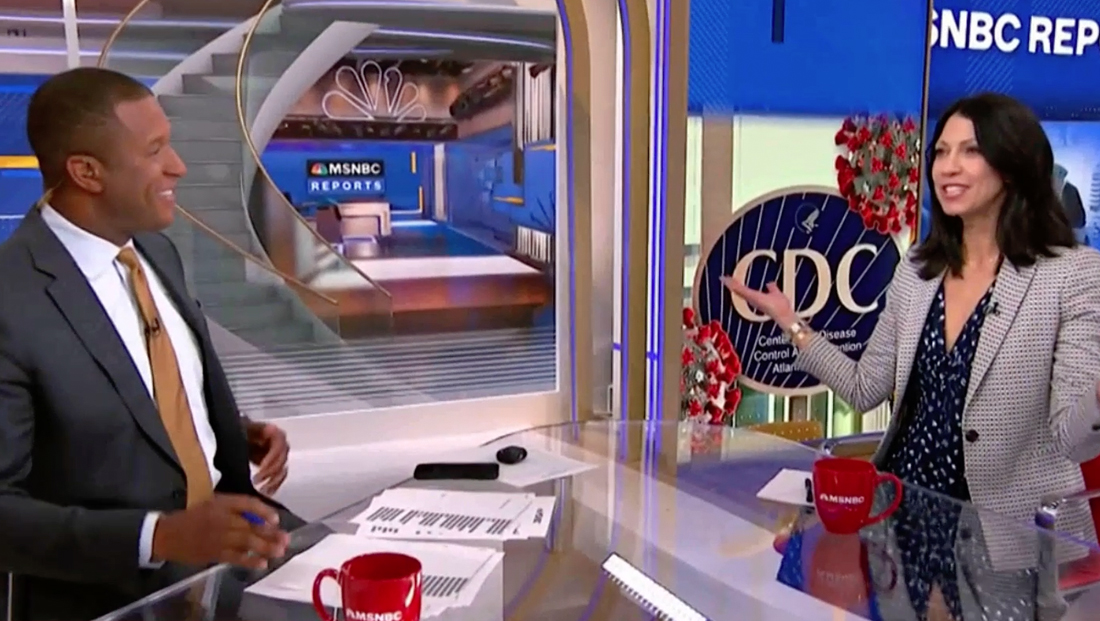 In this in-studio interview shot, a recreation of the former ‘NBC Nightly News’ set is seen tucked behind the curved ‘staircase’ on the virtual set extension being fed to the video wall.

These extensions also included the spiral “staircase” found on Miami’s, behind which is tucked a virtual space that has similarities to the former home of “NBC Nightly News” that still sits next to the newly renovated MSNBC space, even depicting the sculptural “deconstructed” peacock sculpture that hangs from the ceiling.

Meanwhile, the NBC peacock and LED panels on the large sliding wall on the far end of the studio showcased a virtual set extension rendering of a bank of windows with a New York City view.

Melvin used two the anchor desks seen already — a smaller circular table and a triangular one with wood base.

The LED floor riser was placed in a corner and used to showcase a tease.

Many hours of “MSNBC Live” have been originating from either remote home studio setups and the so-called “news nook” insert studios NBC uses that feature a video panel behind the anchor position while 3A was renovated and due to the coronavirus pandemic.

For backdrops, many of these hours, including Melvin’s, have been using a variety of 3D imagery seemingly inspired by various NBC and MSNBC sets, with spots to feed in topical or background graphics as needed.

Later in the weekend, another hour of “MSNBC Reports,” Stephanie Ruhle’s would move to Studio 3A on Sept. 30, 2021 with Chris Jansing filling in for Ruhle, who is on assignment.