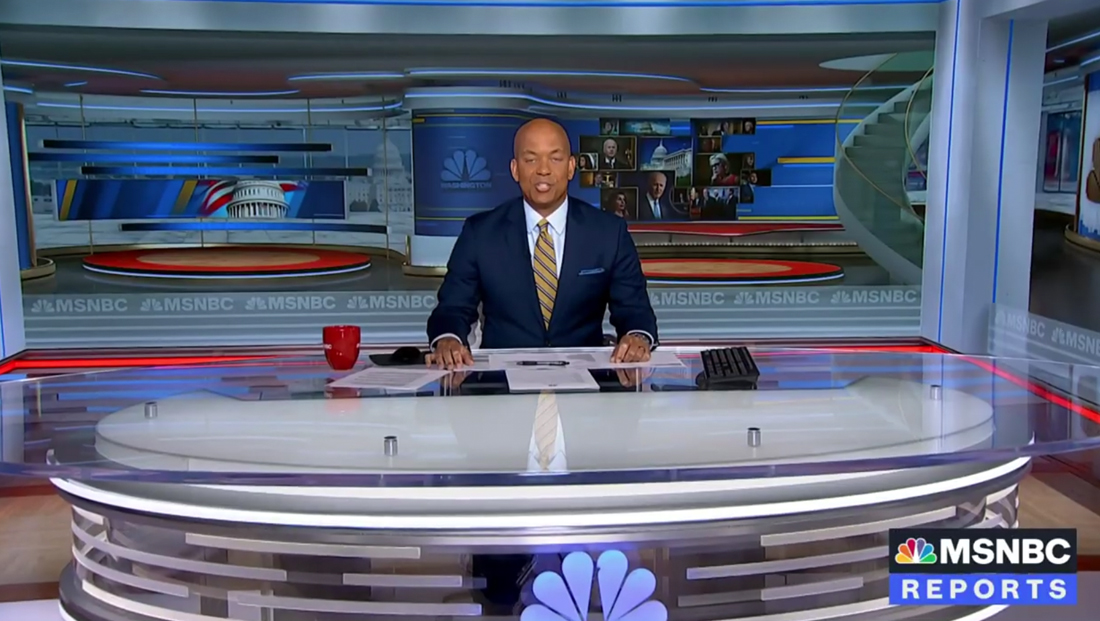 Tur’s hour normally originates from New York, but Geoff Bennett has been filling in for her while she’s out after welcoming a baby, and he’s based in D.C., assigned to the White House, so it originated from inside the beltway.

Both hours used versions of the virtual set extensions first introduced on “José Díaz-Balart Reports” Monday, Sept. 27, 2021, from Miami, where he is based, and then in New York’s Studio 3A for “Craig Melvin Reports.”

However, if you look closely, the background graphics used in D.C. also include 3D renditions of the glossy white columns with the single lighting reveal line found on the 3A set.

Because of that detail, the D.C. backgrounds are actually, in many ways, showing a virtual recreation of Studio 3A that, in turn, shows virtual set extension that doesn’t really exist in the physical world but is shown on the real, physical LED panels installed in 3A.

This is where things get a bit “Inception” — but never fear, the top (might?) stop spinning if you think of it this way: MSNBC and NBC use the seamless video walls in N5 for panoramic but simulated views of Washington on “Today” and more graphic based looks for shows such as “The Cross Connection” and “The Sunday Show.” 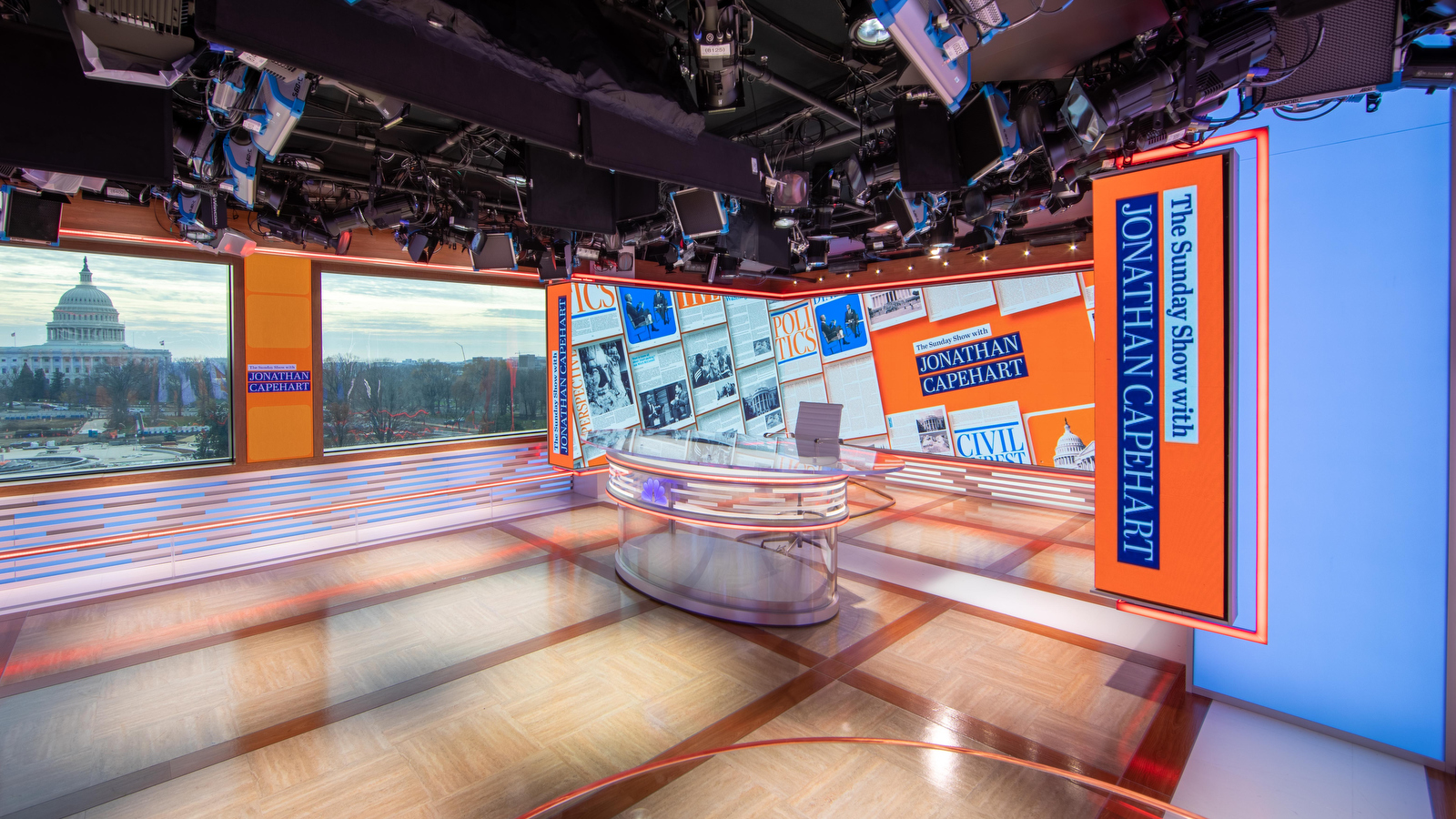 In this wide view of Studio N5, the U-shaped video wall array is shown on the right side and decked out for ‘The Sunday Show.’ Basically all of the orange background with ‘sheets’ of paper along with the show logo are graphics displayed on seamless LED tiles. This is the same place select ‘MSNBC Reports’ hours now originate, with a simulated view of Studio 3A in New York city fed to those video walls instead.

Instead of using this type of design approach for D.C.-based editions of “MSNBC Reports,” the network is essentially simulating what Studio 3A looks like with the set extensions fed to the video walls, but including the real, hard scenic elements such as the columns also shown.

Put another way, it’s sort as if someone took a photo of what the New York City studio looks like with virtual set extensions being fed to the walls and then fed that photo to the D.C. video walls — though this isn’t in reality what happened.

As with the Miami vs. New York versions, the Washington iterations of the virtual set behind anchors are slightly different — including having the word “Washington” under the dimensional NBC peacock on the curved “wall” that “juts” out just over the anchor’s shoulder. 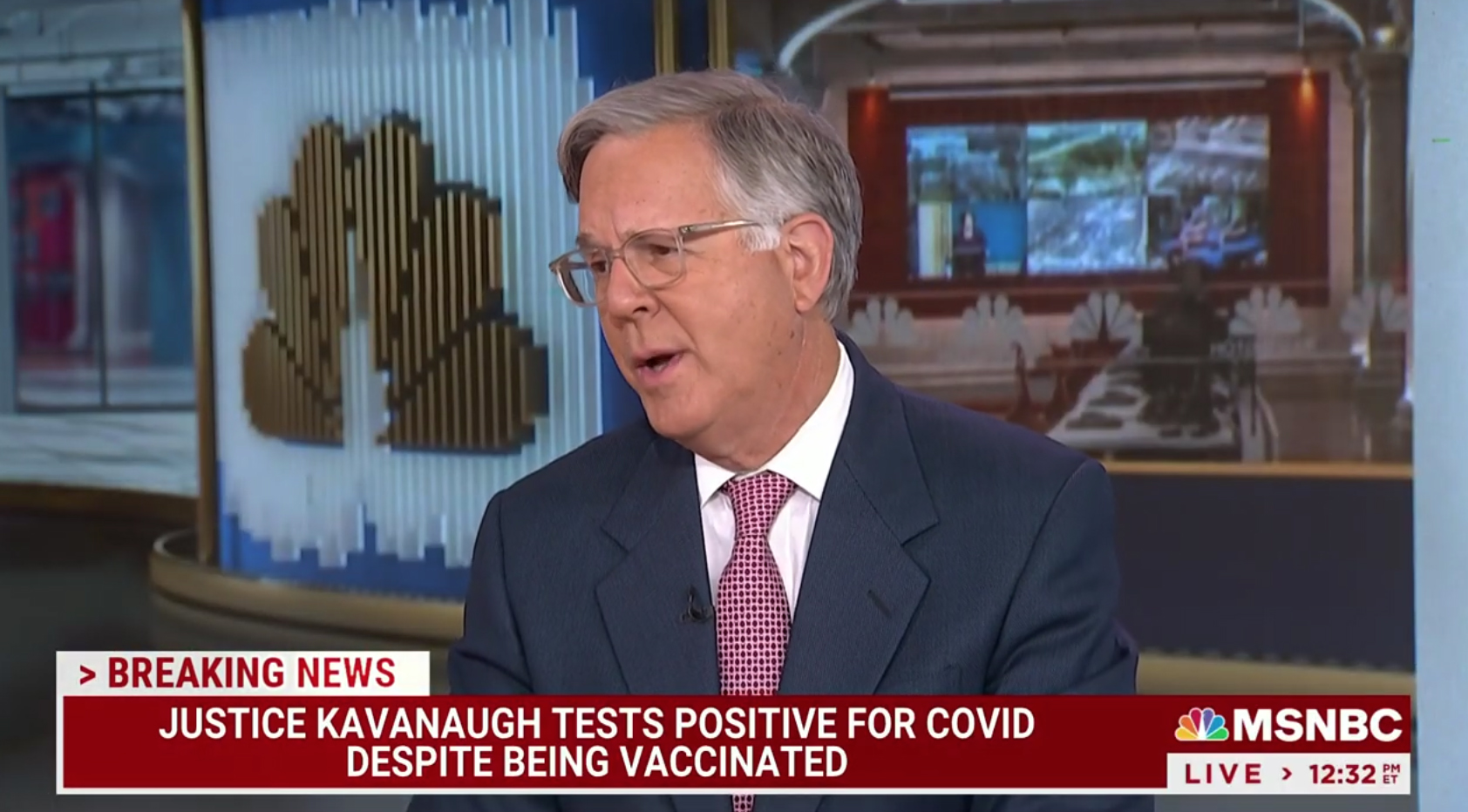 In addition, on the far right, there’s a vertical, segmented peacock “sculpture” as well as simulated views of both Studio N1, the home of “Meet the Press,” “MTP Daily” and special coverage originating from D.C., as well as its adjoining newsroom, much like the 3A version has a version of the old “Nightly” studio visible in part of it. 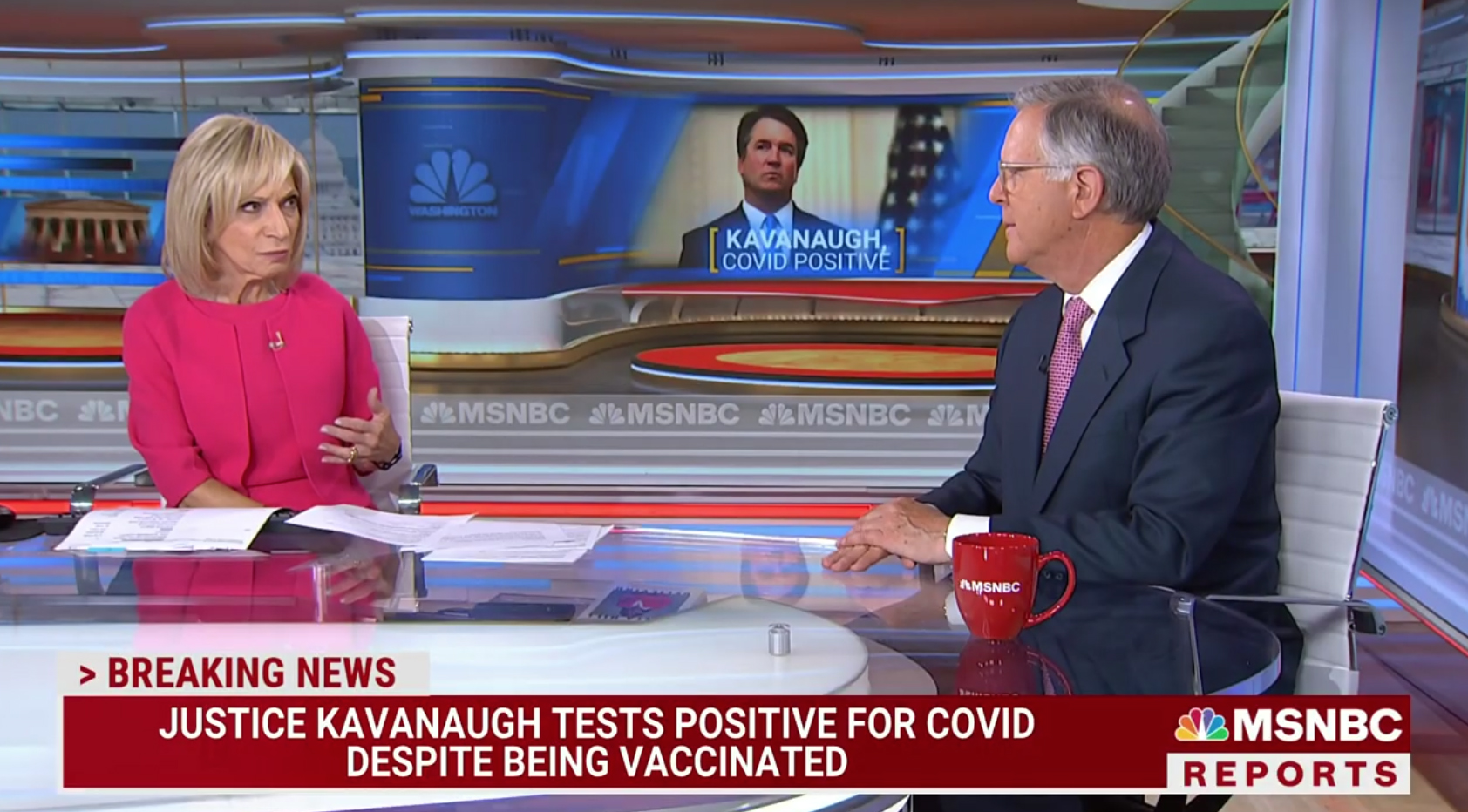 Like in Miami and New York, the D.C. versions also contain spaces that create the look of virtual video walls that topical graphics, such as the “Kavanaugh COVID positive” headline shown here with Supreme Court imagery fed to the “panels” camera left of Mitchell.

The D.C. designs also include an added band of the MSNBC logo in frost near the bottom of the graphics. 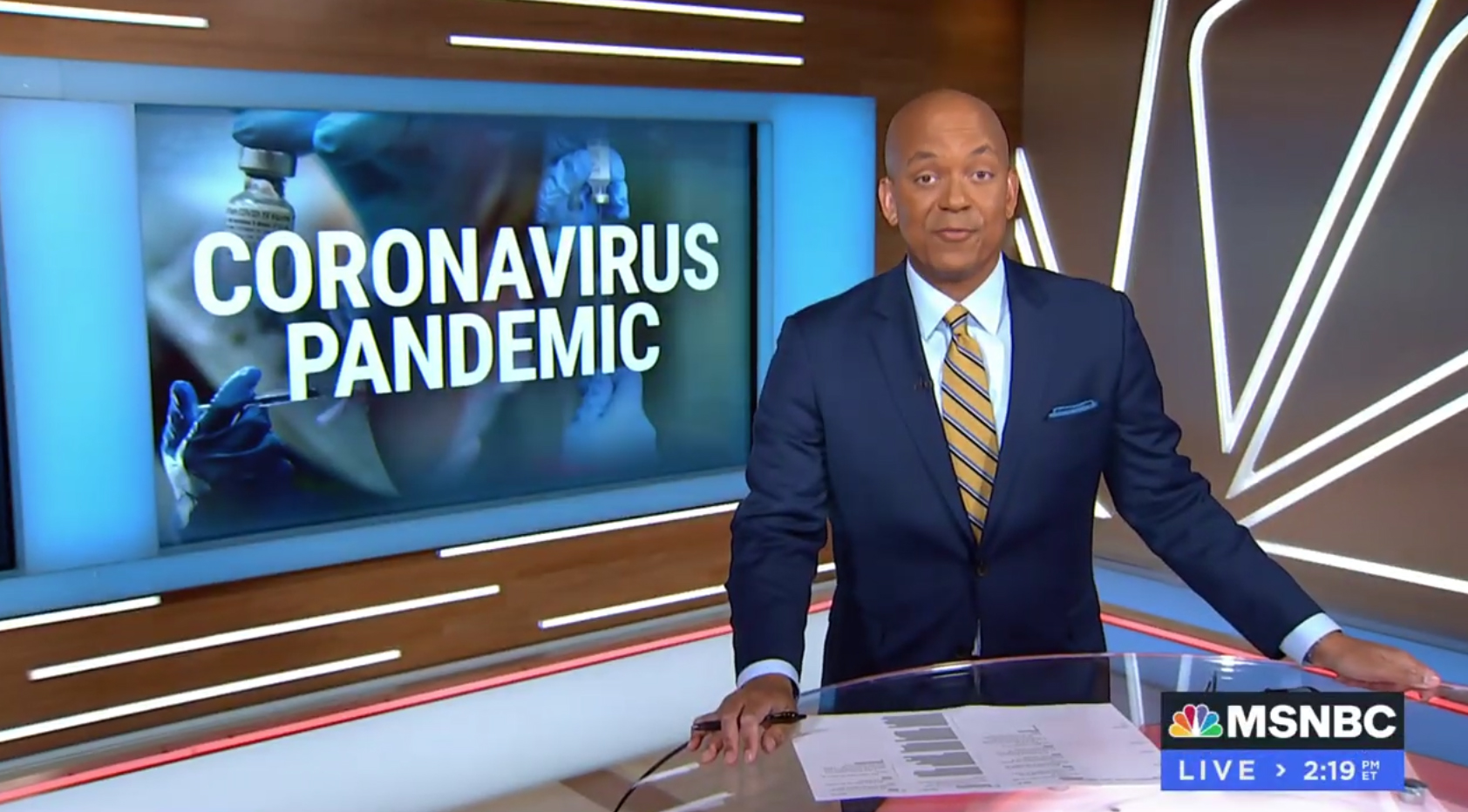 For select segments Bennett moved over to the studio’s smaller, integrated wall monitors near the lighted oversized NBC peacock installation with a more traditional, full size graphic without any hints of a virtual set extension — everything shown on screen outside of that panel is real scenery. 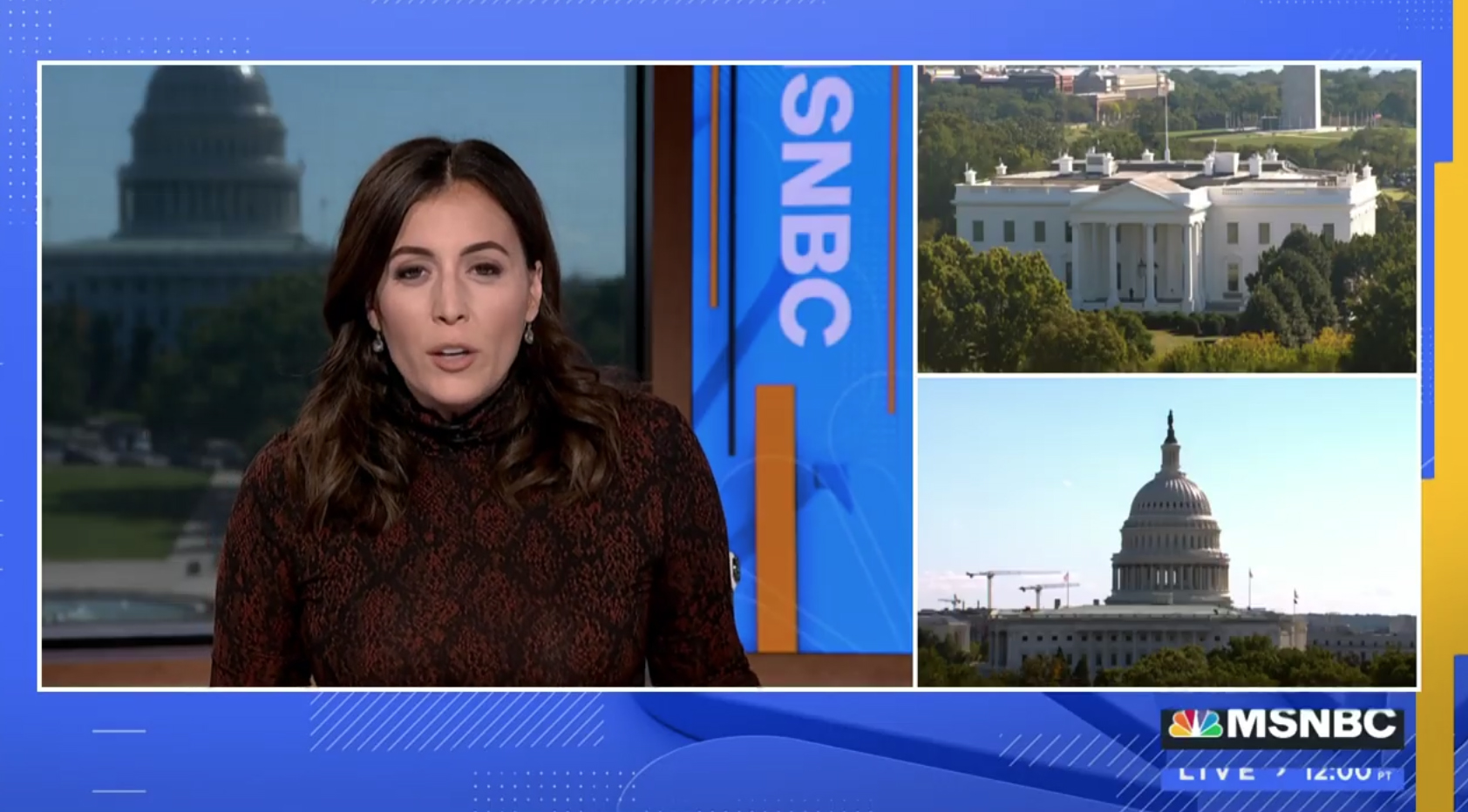 For “Hallie Jackson Reports” on Oct. 1, Jackson anchored from the N5 space in front of the windows overlooking the United States Capitol with the updated “MSNBC Reports” branding fed to the video column that covers a structural support of the building.

This likely was necessitated by her program coming right after Tur’s — something that won’t normally happen when Tur returns and anchors from New York, though it is interesting that Jackson remained in this position for the entire hour.

D.C. based “Reports” programming were originating from insert studios for most of this week, though Thursday editions were broadcast live from outside Capitol Hill.