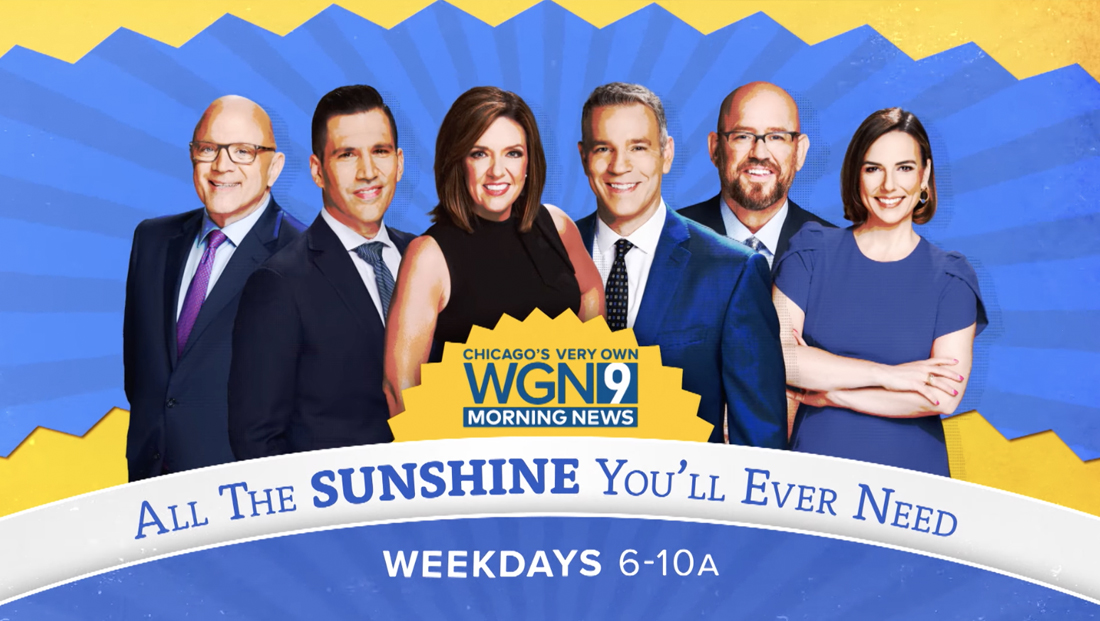 WGN has created a cheerful, clever and offbeat promo for its “Morning News” that follows its classic self deprecating approach to drive home its brand.

“… Our spot encapsulates everything that is the ‘WGN Morning News’ brand, and that differentiates us from the competition — through the use of content from the show,” said Jeff Wilson, WGN’s creative director.

The spot for the Chicago station uses the tagline “All the sunshine you’ll ever need need” and, appropriately, uses a custom version of the 1940 song “You Are My Sunshine” from Stephen Arnold Music.

“Sunshine” was originally written by Jimmie Davis and Charles Mitchell, though Mitchell sold his share of the rights to the song to Davis. According to BMI, the performance rights organization that manages the song’s use, it has hundreds of versions and been performed in nearly three dozen languages.

The graphics, created in house, visually encapsulate the notion of “sunshine” through the use of “run ray” background textures and layers of circles with zig-zag borders that also suggest a bright sun. Bright gold accompanies blue and white that have similarities to the station’s news graphics package.

There is also “stop action” style clips of the anchor team along with clips that have appeared on the popular and often irreverent show over the years, though most of them are culled from more recent productions on the station’s latest set that was installed in 2017 (in true post-2020 style, some of the clips are from when the show was being produced remotely).

The sun-inspired elements often use animation effects that have a slight stop action style to them.

“The goal of this spot was to juxtapose what is a well known song … that elicits positive and earnest attributes, and pair (it) with the unique personalities of ‘WGN Morning News,’ showcasing their key attributes: Real. authentic and funny. Attributes that over 25-plus years the viewing audience has developed a demonstrable emotional connection to, and having been the Number 1 morning news for over 10 years,” said Wilson.

The design uses an informal, bubbly serif font for on screen text, while often framing the footage pulled from newscasts with color bursts, “ray” textures or boxes with rounded corners.

The text reads, in part, “Meet a group of people who wake up every morning and see things a little less sunny,” as SOTs of the morning team that includes co-anchors Robin Baumgarten and Larry Potash, forecaster Paul Konrad, sports anchor Pat Tomasulo, entertainment reporter Dean Richards and traffic reporter Sarah Jindra, saying everything from “Get me a beer, Larry,” “I’m not watching half of this show,” “I’m still miserable,” “This show is so stupid” and “Do you see this on any other station?”

WGN’s morning newscasts are known for being extremely popular in the Chicago area despite being on an independent station, often out rating “Today,” “Good Morning America” and “CBS Mornings” in the adults 25-54 demo.