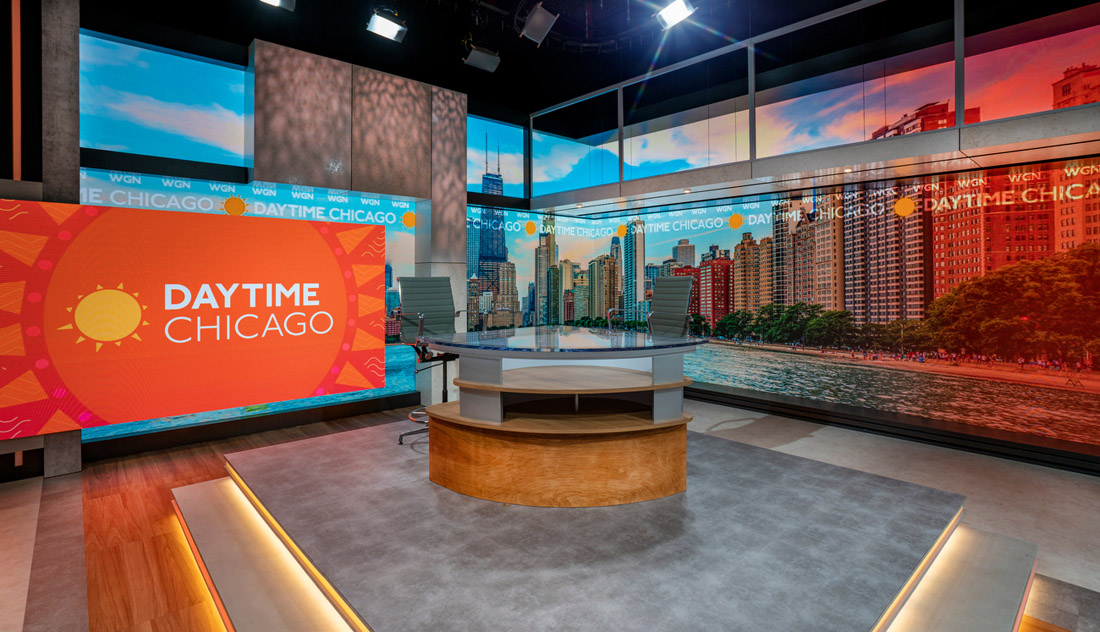 Chicago’s independent station WGN has launched a daytime lifestyle program from a bright and bold studio that’s packed with flexibility.

The set for “Daytime Chicago,” designed by FX Design Group, is centered around a square riser with a small host desk situated at an angle where two seamless video walls from Neoti intersect.

Home base is set up in this corner, allowing for a stylized cityscape image of Chicago with an animated band of the show logo scrolling slowly just under the faux balcony and header elements. Above these, the LED panels continue, creating transom “windows” where the view of the city landscape extends. 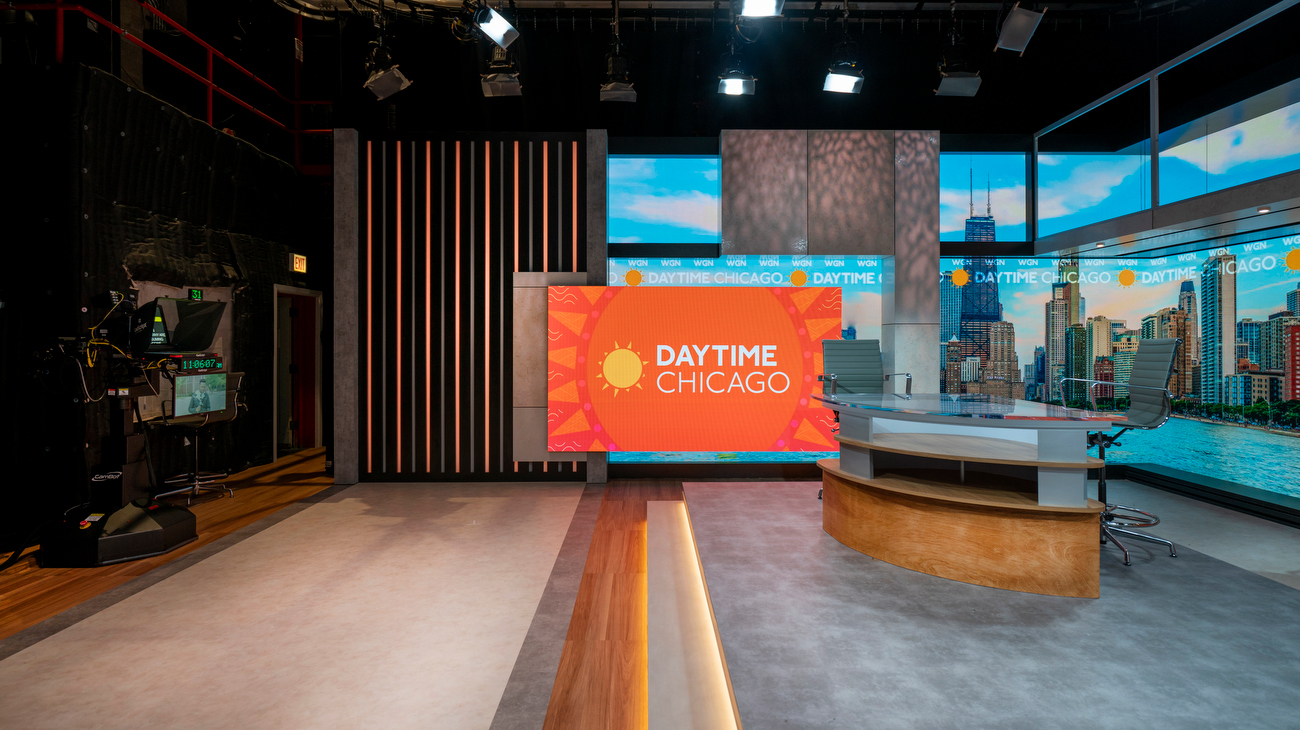 Camera left includes an additional LED video wall that’s layered in front of the primary display. This additional screen, in a 16×9 aspect ratio, is treated as a separate canvas and framed by a faux stone plinth before transitioning to a solid wood-toned wall with vertical color-changing LED bands and reveal lines.

The opposite side of home base features a multipurpose area with a vertically mounted LED panel set against additional faux stone walls with geometric reveals.

The station can use a variety of configurations in this part of the studio, including a wild “demo” table and another one outfitted with a cooktop. 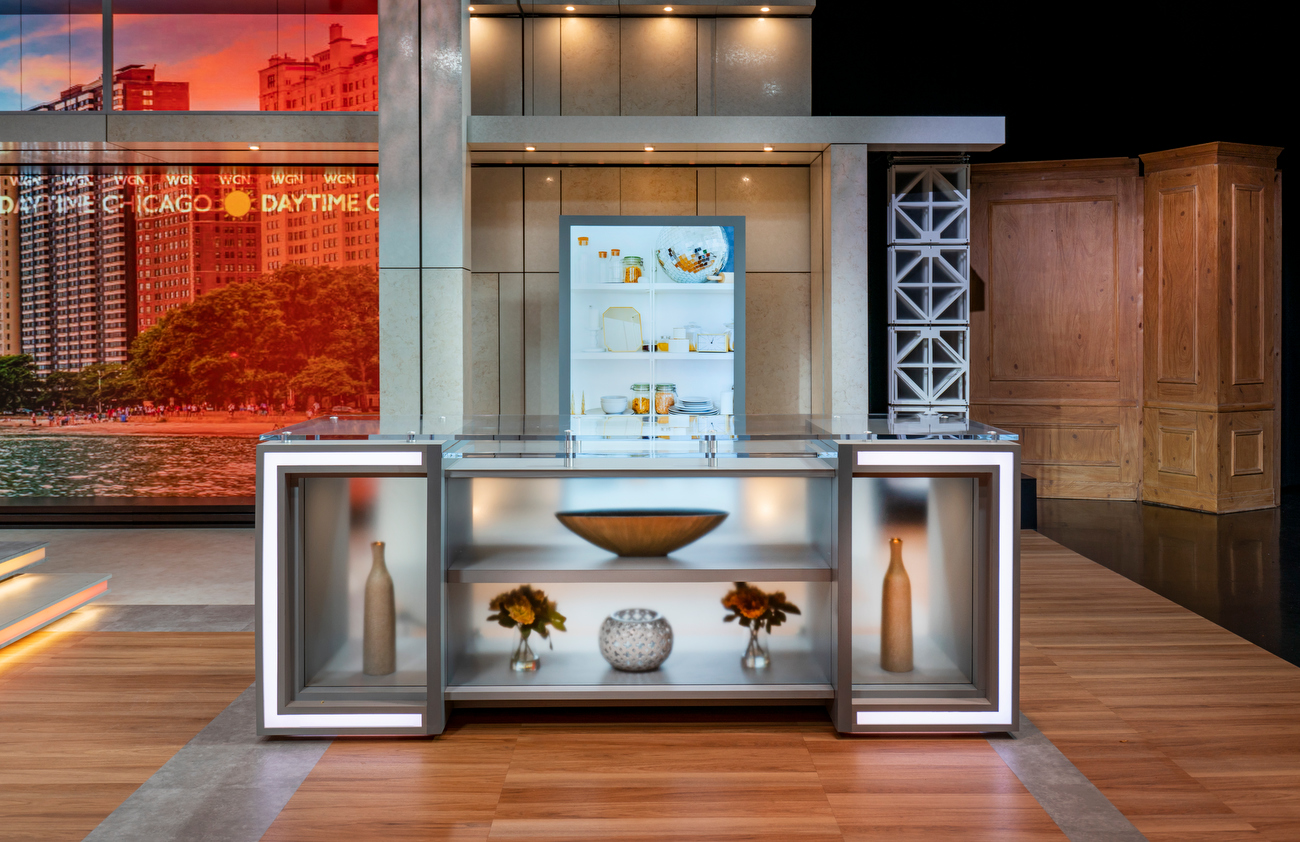 Demo area of the set design. Photos by NewscastStudio.

Meanwhile, the vertical video panel can be used to further “customize” the area to match the content — for example, cooking segments can feature an image of a kitchen wall or it can be swapped out with any number of other graphics.

Other options in the space include a geometric screen – which can also track to obscure part of the LED wall – and a shoot-off wall leftover from a previous show that allows the station to get wider shots when needed.

The set is located inside of Studio 1 at WGN’s historic headquarters north of downtown Chicago, which was once home to “The Bozo Show” — and the shoot-off murals depicting the underside of a circus tent still hang in the upper portions of the space.

FX also designed the set to be compact enough that the studio can be used for other productions as needed, either leveraging all or part of it.

With the installation of the “Daytime Chicago” set, all of WGN’s primary studios are now occupied with a dedicated set. Studio 2 serves as home to the station’s local newscasts and Studio 3 is used for NewsNation programming, as is an upstairs open newsroom studio.

The WGN News and NewsNation fill their entire respective studios, so it was important for “Daytime Chicago” to not take up as large of a footprint so the station could use the space for other productions, such as political debates, town halls, specials or promotional shoots.

Consequently, the physical scenery only takes up about half of Studio 1, which also boasts an upgraded floor and grid that was part of a refresh that included mostly gutting the space when the new WGN News set was installed next door (WGN News had been in Studio 3, closest to the station’s newsroom, for years before that so it was able to transition seamlessly between sets).

Fransisco was previously a weekend anchor for WGN, while Rutledge previously hosted morning show “The Jam” on WCIU, which was canceled earlier in 2021.