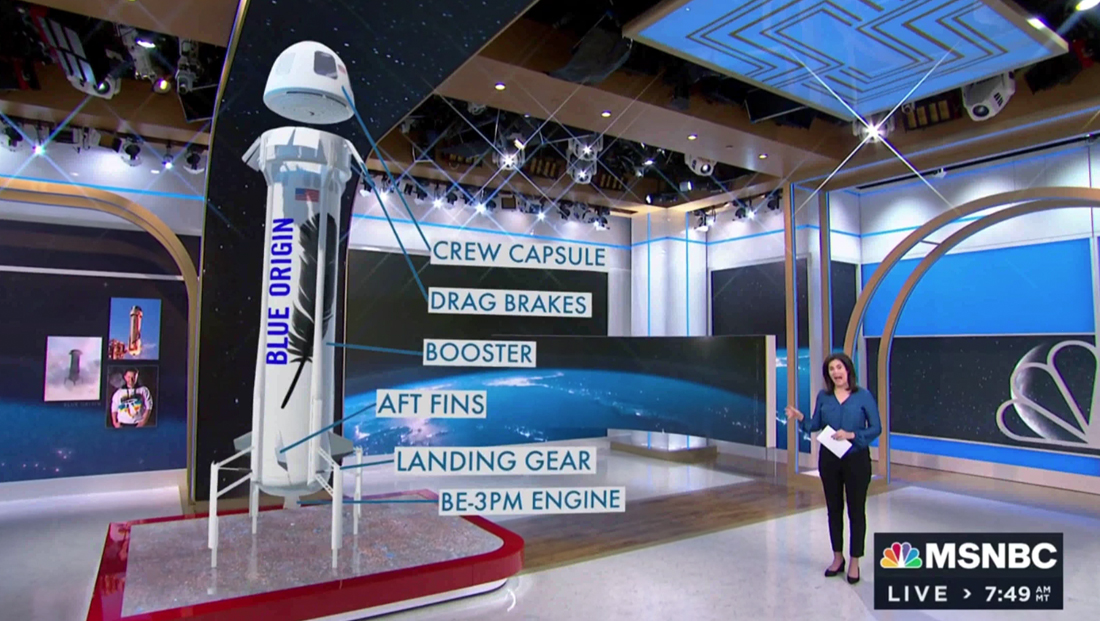 The mission, which had actor William Shatner, known for his role as Captain Kirk, the leader of the USS Enterprise in the science fiction series “Star Trek,” on board, took place Oct. 13, 2021.

For the occasion, MSNBC added a nearly two story augmented reality recreation of New Shepard 4 to Studio 3A.

It was showcased at the top of “Stephanie Ruhle Reports” with a floating camera “walk and wander” style shot that eventually zoomed in on the curved LED video wall that featured a diagram of the mission’s path.

The rocket itself was positioned on the red riser equipped with LED video tiles, roughly in front of the video ribbon that stretches over the north-south axis of the space.

Later, correspondent and anchor Lindsey Reiser was shown standing inside the space as the various parts of the spacecraft, which has become the subject of memes thanks to its phallic shape, were called out.

This view also included three images on the far camera right corner video wall in the southeast corner of the studio while a starry black background was fed to the ribbon and a view of Earth from space show on the curved portion of the video wall.

The video tiles on the large sliding wall segments showcased a crescent moon behind the dimensional NBC peacock logo in the center.

In addition, the jib in 3A appeared to have its “star filter” thoughtfully activated to add a bit of dramatic lighting to the look.

“Stephanie Ruhle Reports” used a combination of the virtual set extensions that debuted Sept. 27, 2021 as well as the more space themed backgrounds as it bounced between stories ahead of the launch.

Both NBC and MSNBC have used augmented reality in Studio 3A before, though it was before the 2021 renovation — applications included hurricane coverage and 2020 primary and election night coverage.