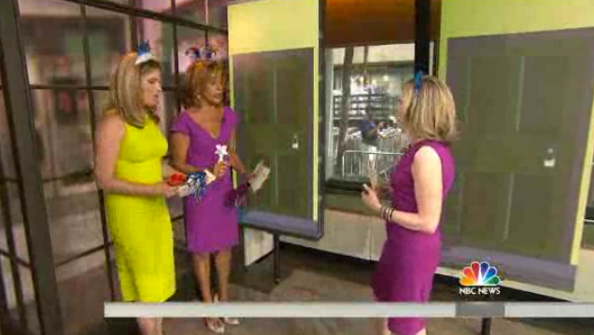 The six panel movable video wall in the production area of Studio 1A showed off its flexibility on this morning’s “Today Show.”

Hoda Kotb and substitute host Jenna Bush Hager made use of the wall in a segment about making good food and drink choices during summer barbecues.

During the segment, a door graphic was displayed on each video panel, which were spread out over almost the entire width of the windowed wall of the studio, leaving open space between each. One by one, the hosts went down the line and, standing in front of each screen, the door would “open” (accompanied by a doorbell or knocking sound effect) and a fictional “friend” was shown offering two food or drink options.

The hosts were challenged to an impromptu quiz at each station where they were asked which option was the healthier pick.

“Today” has made extensive use of the video wall that was added in last fall’s redesign of Studio 1A, including using it for standups, OTSs, showing video and even creating virtual environments such as an additional kitchen.

Watch the segment below.