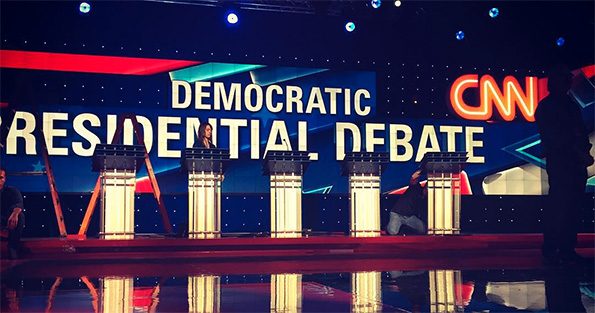 The stage is set for Tuesday’s CNN Facebook Democratic Debate, broadcasting from the Wynn Resort on the Las Vegas Strip.

This marks the second debate broadcast by CNN this presidential cycle, with the first set in front of Air Force One at the Ronald Reagan Presidential Library.

The setup, which uses the same podiums as past CNN debates, features a large video wall, backlit CNN logo and many repeating columns of dots.

Clickspring Design worked with CNN on the design, as they have for many election cycles.

The coverage begins Tuesday at 8:30 p.m. ET, with Anderson Cooper moderating the debate.