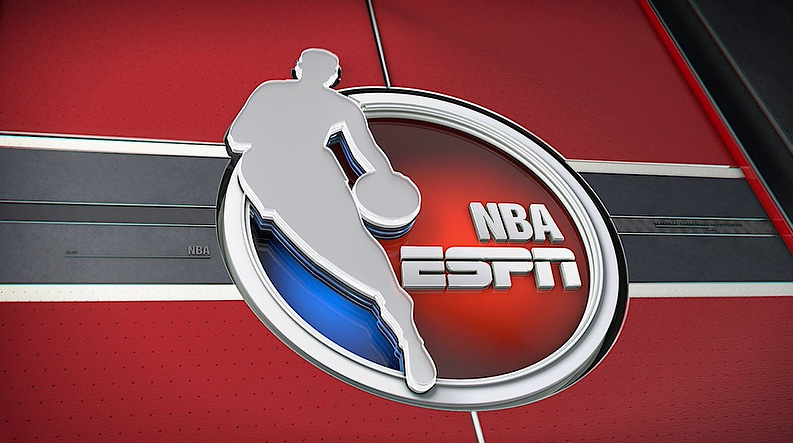 As the NBA season tipped off Tuesday, ESPN’s coverage featured a new look to anchor its nine-year rights agreement extension with the league.

“The new design aims to place the spotlight on the stars of the show: the NBA players, NBA teams and the redesigned NBA and ESPN co-branded logo,” notes Ben Cafardo on ESPN FrontRow.

The logo design, which replaces a look that debuted during the 2011 playoffs, streamlines the design and coloring, retaining the circular shape. Gone are the previous basketball lines, with a larger emphasis placed on the player silhouette of all-star Jerry West. The motion graphics feature the colors and looks of the league with some tactile detailing, dropping the former glossy 3D world in favor of a flat design style.

This aesthetic is continued through the flipbook like maze of animations on-air that take viewers through a rotating world of information. Graphic elements include bits of texture, such as the feeling of a basketball, that help connect the rebrand further to the sport while also not feeling stereotyped.

The updates also include a refreshed musical theme from Warner/Chappell Production Music that features a heavier beat with more guitar and less emphasis on horns.

A vast change from the previous motion graphics package, the new design will anchor ESPN’s coverage for many seasons to come while also bringing the brand in line with other recent ESPN updates.