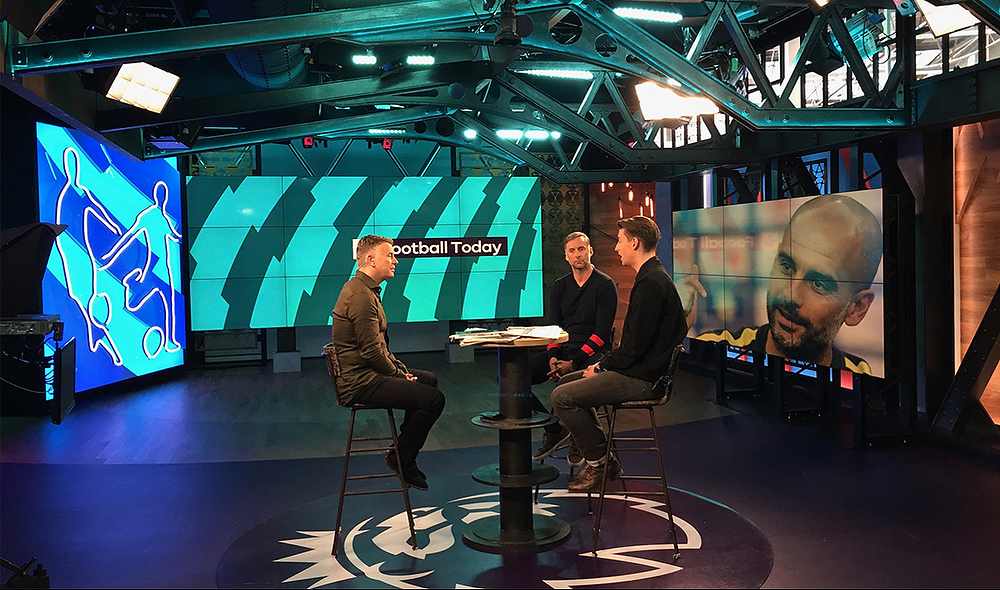 As we’ve heard in this month’s Industry Insights roundtable, localism and technology are two factors driving the scenic design process, with no greater example of this than the recent studio upgrade for the Premier League.

Launched last fall in London, the studio was developed by JHD Group with one goal in mind: shed the English football league’s old mindset and embrace the “authentic.”

“We started with a raw and natural space to embrace the industrial line,” explained Jeff Hall, principal of JHD Group. “We were able to take turn of the century industrial elements such as steel beams, girders and lever mechanics.”

These elements were then blended with the league’s new brand graphics and textures, such as brick, tile and steel. Wide view of the studio from JHD Group.

Since the studio had a smaller footprint, the design team looked upward for space to make an even bigger visual impact.

London bridges and towers were used as inspiration for the turn of the century tie-ins to the architecture of the city — and the result is an eye-catching array of arched beams that created a “top-down” industrial warehouse feel.

The dynamic curves of the beams blended perfectly with the “zig zag” pattern that was developed as part of a collaboration with Stuart Watson and his team at DesignStudio, who created the visual rebrand for the league.

The pattern was overlaid on the studio’s brick wall design and wood walls.

“This was a subtle way of blending graphics and textures to support the brand,” said Hall.

In order for the studio to appear larger and shoot bigger the design team strategically worked in two faux windows into the space. The northern end of the studio features an arched window created with 103-inch monitors that draw allusions to stadium architecture.

In front of this window is a track system that houses four 85-inch monitors that could travel around the space, creating different compositions and setups per show, notes Hall.

The studio’s second window was a long transom that gives the appearance of looking into a secondary warehouse space.

“The challenge was integrating the ceiling beams into the transom at a height that didn’t expose any of the lighting instruments while still allowing backlighting for talent,” said Hall.

The movable nature of the panel array provides a myriad of looks and positions to support numerous topics and setups. The set also allows producers to project relevant backgrounds and playback behind the sit-down area, as well as supplement stand ups with playback and supplementary information.

The design strategy also paid close attention to the new Premier League brand standards, and made a conscious effort to stay true to the textures defined in the guide, which included avoiding LED color changing walls in favor of depth.