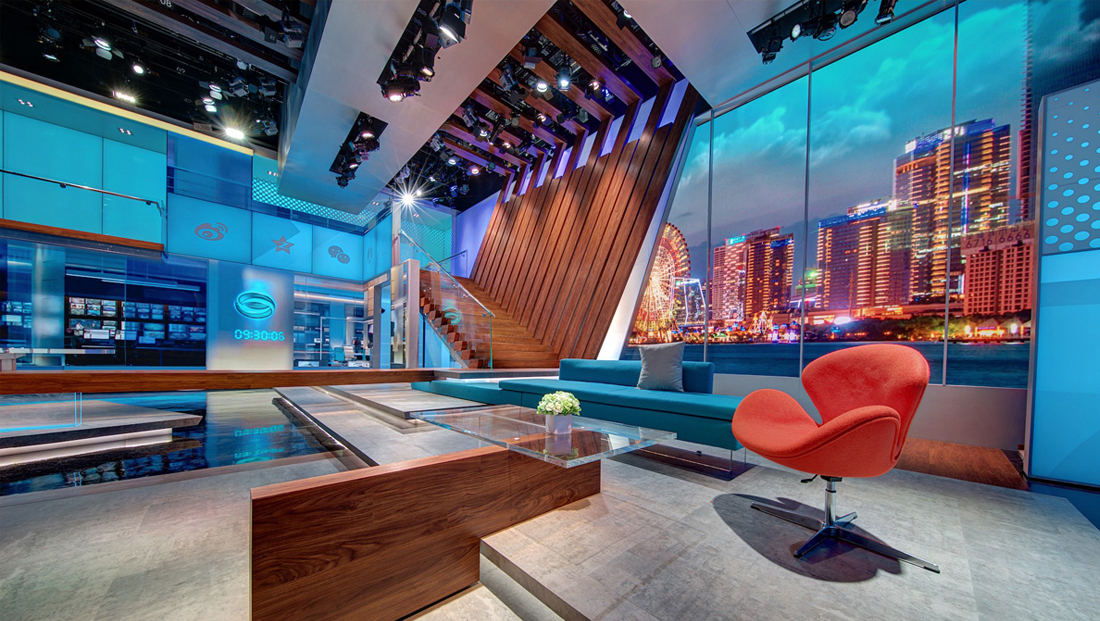 SZTV (苏州电视台) debuted a new broadcast center that was designed with a special emphasis on structural balance and harmony through the use of dramatic right angles and a twist of the unexpected: bold off-axis lines and virtual set extensions.

The multi-venue space features clearly defined areas such as the primary anchor desk, weather presentation area and interview area, but also takes full advantage of the sprawling space to incorporate a variety of flexible stand up and alternative presentation venues.

Throughout the rest of the space, LED walls are placed strategically to accommodate the needs of a modern broadcast space. The panels go far beyond just being high-tech backgrounds. On the south, meanwhile, a double height wall stretches over 12 feet vertically and over 30 feet wide. In front of this is the main anchor area.

While some programming uses branded graphics in the video wall, the network also uses virtual set extensions that blend faux walls with dimensional logos and the look of a control room beyond.

To further enhance the blending of virtual and real, the set also uses rectangular, backlit panels with a gradient overlay for added texture and depth. The studio also features a Juliet balcony at the mezzanine level with backlit panels that allow it to blend into whatever is being fed to the LED wall below.

Together, all of these scenic elements give the space the flexibility to use the LED walls with branded backgrounds alongside a bustling control room or sprawling cityscape while complementing the hard scenic elements and materials.

“The primary layer supports the news broadcaster with news story graphics; it integrates these news stories like tiled window panes into a unified graphic look. A second layer of LED at the perimeter provides the set with an architectural sense of place. This screen is detailed like a massive window wall looking out into the city of Suzhou,” explained Ferguson.

Where the video panels and backlit panels stick to a solid and strong grid foundation, the design is boldly intersected with a dramatic wood-tone staircase with treads that take a low grade to climb elegantly up the wall of the studio, with similar slats floated below the grid.

The addition of the staircase also presented an opportunity to celebrate the way the studio’s two levels integrate with each other.

While the flying LED panels to slip between levels are one example of this interplay, Clickspring quickly realized there was a chance to make an even more impactful move — hence the stairs.

“Introducing a grand staircase as the primary focal point of the studio plays into the notion of balance,” said Ferguson.

As the studio’s focal point, the stair is visible as a background element in a majority of the on-air looks.

“Its scale and prominence allow the studio to embrace an architectural identity that complements its broadcast functions, while the warmth of the rich wood provides a welcome foil to the expansive surrounding LED displays,” Ferguson explained.