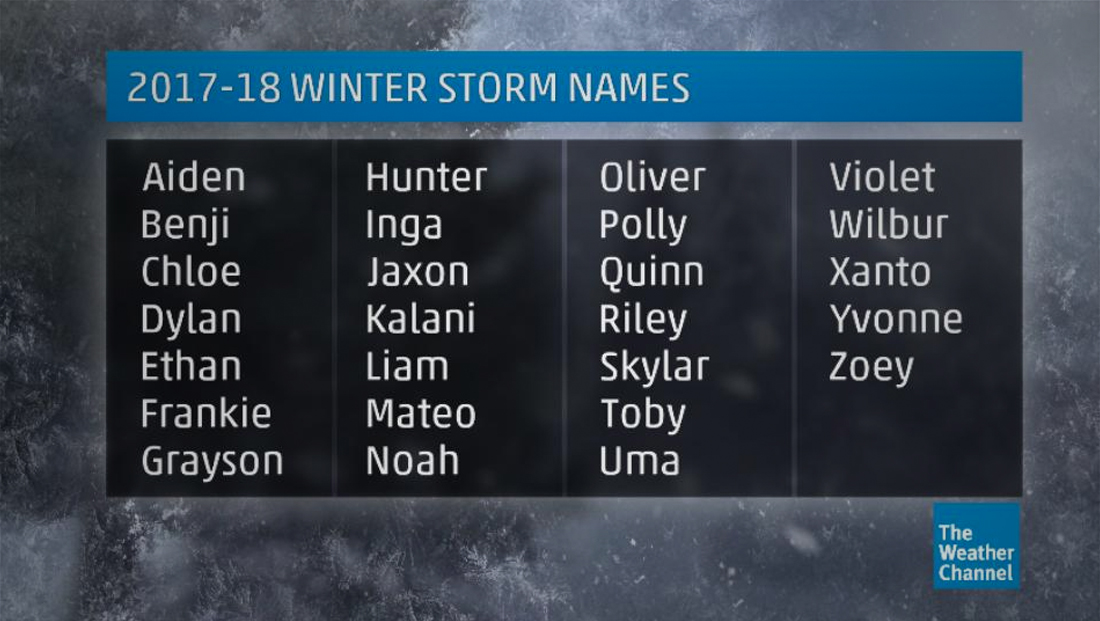 The Weather Channel has revealed its list of winter storm names for the 2017-2018 season, which includes some of the most popular modern baby names: Mateo, Kalani, Aiden and Polly.

This marks the sixth year the network has named winter storms to simplify public communications during these severe weather events and to better alert residents living in storms’ paths.

“As winter storms increase in impact and severity, it is all the more important to have an easy system to alert residents to forecasts and warnings, providing potentially life-saving information,” said Tom Niziol, winter weather expert for The Weather Channel in a statement. “Last year, Winter Storm Jupiter dealt Portland, Oregon its heaviest snowstorm in 22 years, while Winter Storm Niko brought severe snow and blizzard conditions to much of the northeast. We’ll do whatever it takes to ensure those threatened by snow, ice, and freezing temperatures get the facts they need quickly and easily.”

The storm-naming criteria are based on National Weather Service thresholds for winter storm warnings and the storm’s expected impacts on a population center or over a large geographic area.

Winter storms are named when a population of at least 2 million or an area of at least 400,000 square kilometers (about the size of Montana) are expected to go under NWS storm warning. Winter storm names help convey information in an easy-to-use format that allows meteorologists and residents to share critical weather updates in a timely and organized fashion.

This season’s names were announced on AMHQ, the network’s signature morning show. They are taken primarily from the most popular modern baby names.

They include Mateo, the Spanish form of Matthew derived from the Hebrew word for gift; Kalani, from the Hawaiian words meaning the heaven or the sky; Aiden, originally from an Old Irish name meaning fire; and Polly, from Molly a traditional nickname for Mary.