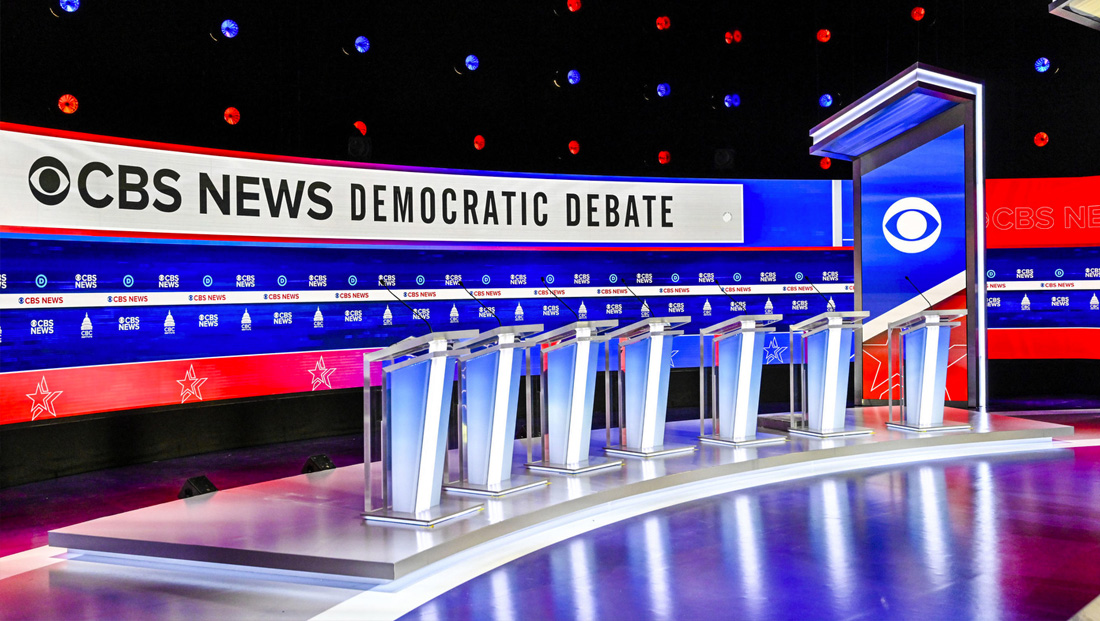 Despite being widely panned by critics and viewers alike, CBS News‘ first foray onto the 2020 debate stage did manage to leverage a bold and dynamic set design as well as a broader application of its new “America Decides” election branding.

CBS panned for ‘disaster’ of a debate https://t.co/6yiPSLapJ8 #TVNews #BroadcastNews

The set, which occupied the stage of Charleston, South Carolina’s Gaillard Center, was designed by Jack Morton Worldwide and built by PRG and Showman Fabricators with lighting design from Michelle Poley.

CBS and Jack Morton aligned the on stage elements along the axis of a “vanishing point” — a well known concept in art history — to draw the eye to the centerpiece of the debates — the candidates.

To accomplish this, three upside down L-shaped LED towers with decreasing heights and angled headers were placed on either side of the set — and used anglular graphics to drive home the a series of strong — if interrupted lines that terminated near the far back curved video wall.

This LED array served as both a billboard showcasing the debate branding as well as the “step and repeat” style background behind candidates — with a white band with repeated CBS News logo in black and white running down the middle of the lower blue field.

Below the blue field was a blue and red gradient while the LED above created the sense of a structural header with “CBS News Democratic Debate” banner emblazoned on it — complete with the faux “standoffs” introduces as part of the “America Decides” look.

The debate open featured a collage of candidate statements from the campaign trail interspersed with brief animation stingers of black lettering placed within a red, white and blue 3D space dramatically rotating by the viewport.

During this segment, a CBS News along with the duo of the America Decides star icon sat in the lower right corner.

This segued into a virtual walk through a clean and modern “labyrinth” of America Decides branded elements.

The space included textural white elements on the “floor” and “ceiling” while the walls features large glossy “panels” with metal standoffs.

A quick swing around a corner saw an oversized silver star zoom by before the viewport settled on the title card, designed to look like it was “mounted” on the wall next to a metallic CBS eye.

During the debate, animated insert graphics helped remind viewers of which candidate is who as well as summarize the current question being posted. These typically used a white background with the standoff elements and also included thin white outlines with clear or semi-transparent fills.

During the entire debate, the network used a red, white and blue bar running near the bottom of the screen with a design that mirrors the additional tier both “CBS Evening News” and “CBS This Morning” during election coverage.