With no cramped skyboxes, networks spread out for coverage of virtual Democratic convention 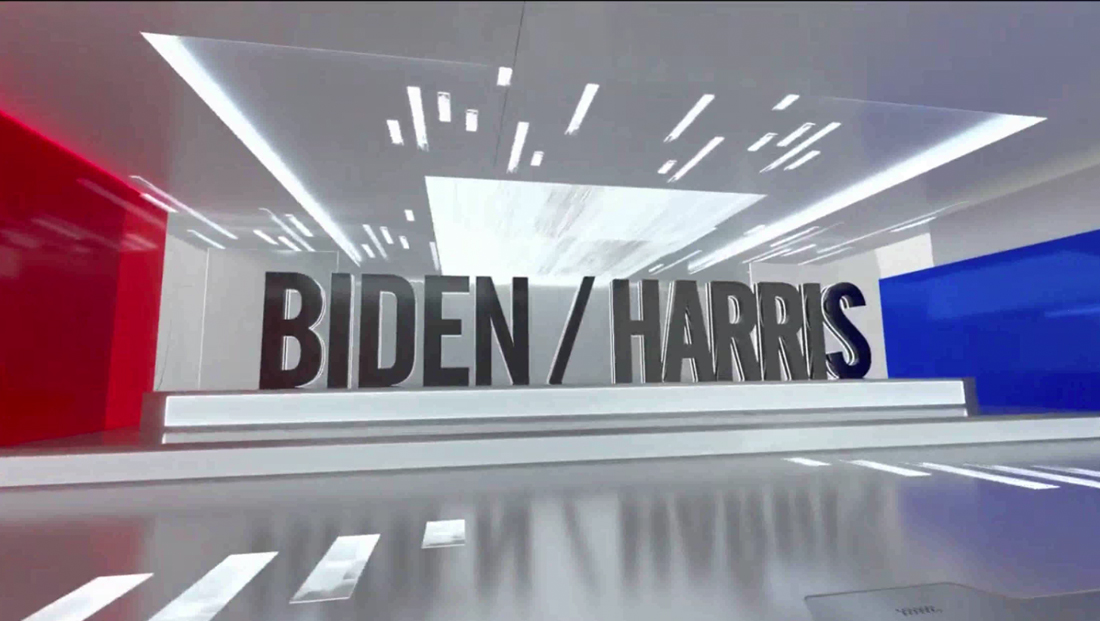 Aug. 17, 2020, as pretty much every anchor and host reminded us, was the start of a convention unlike any we’ve seen — a mostly virtual one without balloon drops, crowds or audience reactions — all due to coronavirus.

Instead of the elaborate convention hall stage designs that have become a hallmark of the DNC and RNC events, a virtual set, a small stage with lectern and background and locations throughout the country served as the backdrop for the DNC-produced convention feed.

All of the major broadcast and cable news networks covered the virtual convention — with ABC, CBS and NBC carrying select parts of the feed while mixing in their own commentary and analysis (there is a report that network execs did not carry the full feed for a specific worry).

Continuing the trend from 2016 and 2012, the broadcast networks only carried an hour of primetime coverage, while cable offered more extensive coverage, including before and after the actual convention feed aired.

Cable networks CNN and MSNBC leaned heavier on the feed itself — only cutting in at select times and rarely covering the audio.

Fox’s commentary cable channel, however, cut in more frequently to cover proceedings with its own commentary.

Meanwhile, forced to do without the skybox broadcast booths normally built for conventions, the networks reverted back to using their own studio facilities and other setups as home base for coverage.

ABC News utilized its sprawling TV3 studio, with anchors and analysts socially distanced from each other around the LED floor.

At the start of the broadcast, WLS in Chicago inserted the time and temperature, which appeared to be the one normally overlaid on top of the “Good Morning America” bug.

CBS News featured an extended open using its election look and special setup in the Washington, D.C. home of “CBS Evening News” — with anchor Norah O’Donnell standing while commentators were spaced out behind the curved anchor desk originally built for its February 2020 debate.

The various video walls and monitors were used throughout the evening.

NBC originated its Super Tuesday coverage from Studio 6A on a modified version of the “Megyn Kelly Today” set, but that space has since been modified for “The Tonight Show.”

Over on cable, CNN used its normal election look and had anchors split up across multiple locations, though it did make use of the large video walls in its D.C. bureau to showcase graphics.

Fox’s conservative commentary channel originated coverage from an outdoor rooftop location in Washington, D.C. with a view of the White House.

On set with Juan, Martha and Dana #foxnews

MSNBC used the corner video wall installation in Studio 3A in Rockefeller Center as well as the space’s myriad of video panels and walls.

Of note was a dynamic series of handheld camera shots with swift movements outlining the schedule of events for the night.

During speeches, MSNBC would cut back to a shot of the large floor to ceiling video wall in Studio 3A with the DNC feed shown in a small box and key facts about the speaker on the curved video ribbon portion of the LED installation.

Earlier in the day, “The ReidOut” originated from the video wall alcove on the “NBC Nightly News” side of Studio 3A, including with “Decision 2020” branded opens that incorporated its logo.

It’s worth noting that during the 2016 election cycle, MSNBC originated convention coverage from the same part of the studio, using the video walls to display a panoramic live feed of the convention halls.