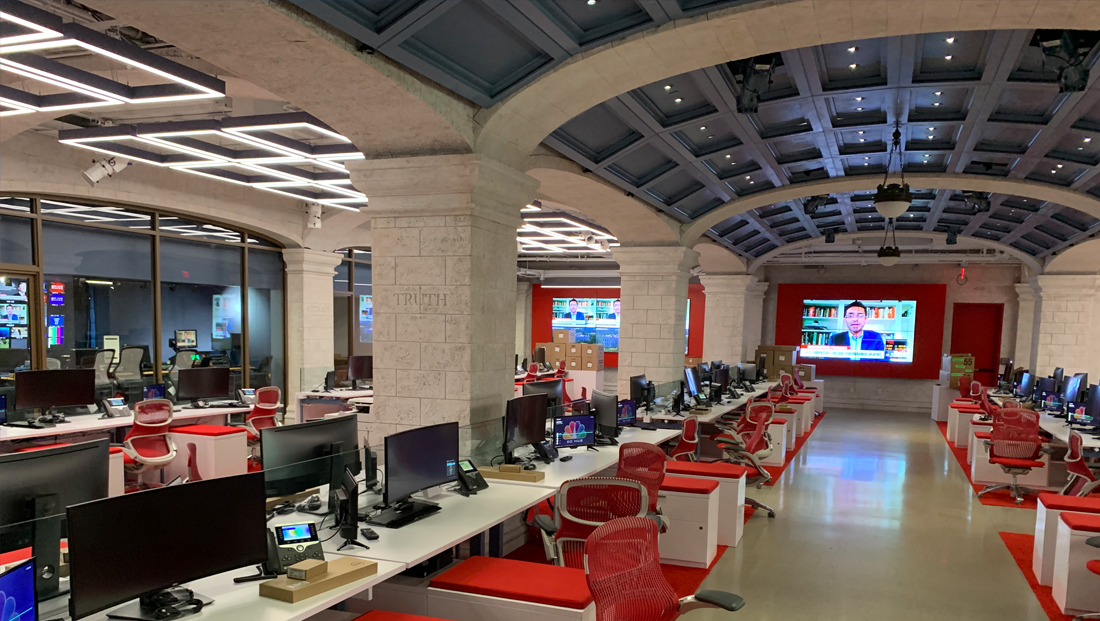 As NewscastStudio sources told us Friday, Sept. 18, 2020, the bureau shut down operations from 4001 Nebraska Avenue NW, also home of the network’s NBC and Telemundo owned affiliates, that day.

The full text of the memo, obtained by NewscastStudio, also included an attached photo of the network’s new newsroom, which features “federal style” finishes and architecture including columns “engraved” with words such as “Truth” along with modern spins of the motif.

There’s also a barrel vaulted ceiling possibly inspired by both the city’s subway system and the coffered ceilings seen in classic architecture.

Sources later confirmed the photo shows one of the several workspaces spread out between floors 1, 7 and 8 in the building, with this one on the first level near where “Meet the Press” will originate from.

Here’s the full text of the memo:

After more than 60 years at our historic studio at 4001 Nebraska Avenue, today marks the official “opening” of our new bureau in Washington, D.C, just steps away from Capitol Hill. Though the majority of our employees continue to work remotely, we look forward to soon debuting our new state-of-the-art studios and workspaces.

But before we look forward, it’s important to look back and remember the historical significance that 4001 Nebraska Avenue holds for so many of us here at NBC News and for millions of viewers over the last six decades.

Pete Williams, our trusted Justice Correspondent who has called 4001 Nebraska Ave. home since joining us at NBC News, shared some moving anecdotes and history that we thought everyone would appreciate.

The move to 400 N. Capitol represents a new chapter for us at NBC News and MSNBC as we continue to cover a nonstop Washington news cycle. We’ll be sharing more about our new D.C. home base in the months to come.

Meanwhile, the memo also included anecdotes contributed by Justice Correspondent Pete Williams about the history of the building the network bid farewell to.

President Eisenhower joined NBC President Robert Sarnoff for the formal dedication of the network’s Washington base of operations on May 22, 1958. A year before, Vice-President Richard Nixon placed a small bronze plaque near the front entrance. It’s still there, coated with the patina of six decades.

From the building’s main studio came the second of the Nixon-Kennedy debates, moderated by Frank McGee. David Brinkley anchored his portion of The Huntley-Brinkley Report here. And Ned Brooks invited a young Fidel Castro to the studio for Meet the Press. The medium’s longest-running television program will soon originate from a studio on the ground floor of 400 North Capitol.

Nebraska Avenue was also the first TV address of the Muppets, long before they relocated to Sesame Street.

Bob Hager, who spent 30 years at 4001, says his office neighbors included Brinkley and Sander Vanocur. “In 1967, I walked a union picket line at the Nebraska Avenue entrance for 13 days when AFTRA called a nationwide strike. Chet Huntley, Walter Cronkite, and others went off the air for 16 days while salesmen anchored the newscasts. Later, on the network, I did zillions of standups from different angles on the lawn, by the satellites, the parking lot, and the Presbyterian Church next door.”

Susan LaSalla began her NBC News career on the Washington desk and ended it four decades later as the Washington senior producer for Today. She recalls walking into what was then an enormous NBC-WRC joint newsroom, filled with cigarette smoke. “I was overwhelmed by the noise, huge wire machines rumbling, dozens of typewriters clicking, two-way radio communications, and lots of yelling.” She also says “there were very few women in the newsroom, and most were considered ‘secretarial.’ When Nightly News went to air, a box came out from under the senior producer’s desk, and thus began cocktail hour.”

Director of Newsgathering Tony Capra said one of his favorite memories is “Tim Russert walking calmly up to the desk to say, ‘Hey, I’ve got some news and need to get on MSNBC now.'” Tony has helped lead the bureau’s coverage of two impeachments, 9/11, wars in Afghanistan and Iraq, thirteen elections, six inaugurals, an earthquake, and the Washington sniper.” He recalls working in the DC bureau with Tom Brokaw, Lester Holt, Brian Williams, David Bloom, Katie Couric, and Savannah Guthrie.

My earliest memories of this building, after I was allowed through the door by bureau chief Tim Russert, were of the legendary correspondents: John Palmer, John Dancy, Robert Hager, Bob Kur, and Fred Francis. Also Irving R. Levine, who read the newspaper every morning wearing white cotton gloves. After he retired, I had a new hallway neighbor — a former New York Times reporter named Gwen Ifill.

Andrea Mitchell first walked into 4001 in 1978. “I was overwhelmed. I was joining a team of all stars,” including Tom Pettit, Steve Delaney, George Lewis, Judy Woodruff, Carl Stern, Richard Valeriani, and Chris Wallace. Andrea’s first officemate was Jessica Savitch. “Katie Couric got her start on the Pentagon beat, until her big breakthrough anchoring for the network from the 4001 newsroom when an earthquake hit San Francisco, just before game three of the 1989 World Series in Candlestick Park.” More women were hired, Andrea recalls, Lisa Myers, Kelly O’Donnell, and Jamie Gangel. “The brilliant Gwen Ifill graced our halls, teaming up with legendary producer John Holland. Political coverage was informed and transformed with the arrival of Chuck Todd.”

The ranks of NBC News were swelled by graduates of the Andrea Mitchell school of journalism, including Libby Leist, who went from researcher and producer with Andrea, to State Department producer, to the “The Daily Rundown” with Savannah and Chuck, and eventually to running Today.

“For all the history we witnessed and covered,” Andrea says, “the worst personal loss for many of us was on Friday, June 13, 2008 when Tim Russert, the big guy with a huge heart, was struck down in the prime of his life while recording the cold open for Meet the Press. With Brian on assignment in Afghanistan, I was told to sit at the Bull Cam until a heartbroken Tom Brokaw arrived, while Steve Capus and Jeff Zucker persuaded all the networks to hold their silence until NBC could reach Tim’s family, traveling in Italy.

“Through all those years, the building, shabby as it was, became part of the fabric of our lives, with its own personality — from the plaque near the front door dedicated to the great producer Sid Yates, killed in action in the ’67 war, to the Meet the Press Hall of Fame along the corridor, the dogwoods blooming outside our windows every spring, and the deer grazing in the front circle at dusk in the fall. 4001 was the stage set for my life for 42 years.”

Granted, parts of the bureau, with its green tile walls and rows of lockers, looked like a junior high school. Mice, taking refuge from the adjacent urban national park, nibbled on the wires in correspondents’ row offices. And struggles to control the newsroom thermostat were constant.

What we remember most, though, is the people who made it run, well over 1,000 producers, editors, technicians, photographers, and others who brought the news to television and computer screens — and to radios for half the time the bureau was here — for the past 22,750 days.

Now onto a new chapter, to witness more history, under the leadership of Bureau Chief Ken Strickland.

NBC will move into studios in the new facility later.

Construction on the workspaces and studios the network announced last year was delayed due to coronavirus and other factors.