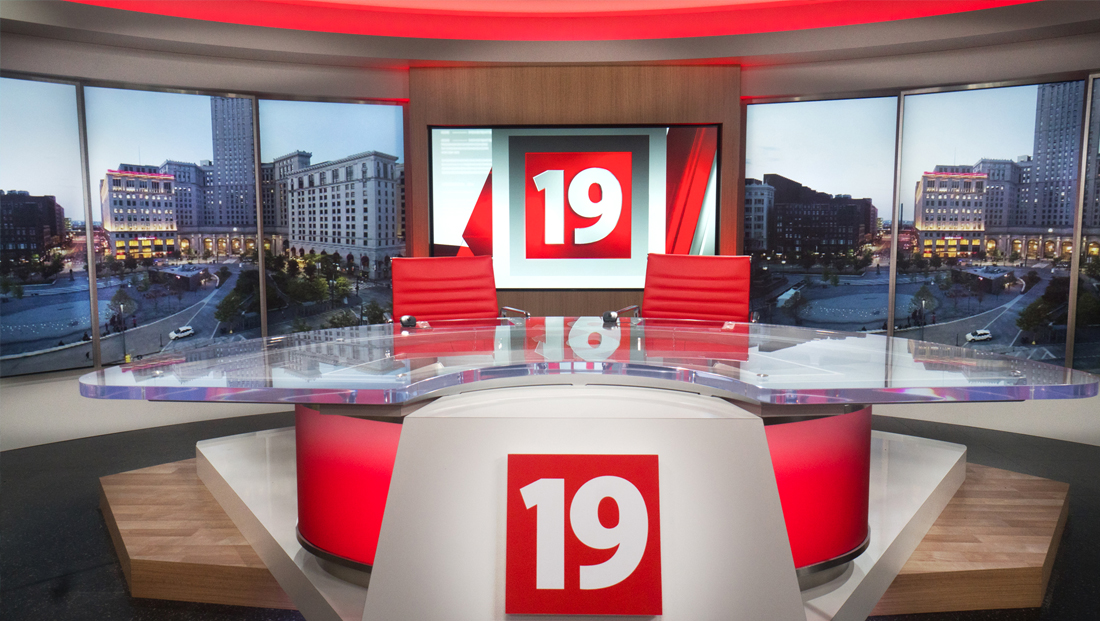 WOIO, the CBS affiliate in Cleveland, Ohio, has debuted a bold, clean and multifunctional new studio and weather center.

Designed by Broadcast Design International, the set’s biggest structural change was the conversion of a room next to the studio into a working weather center, giving forecasters a practical, functional work area while also freeing up space for the core set area.

The two spaces are connected by glass windows and an access door and the forecasters still move to the studio for on air appearances.

For the set’s main anchor desk, the station’s “19” logo (redesigned in 2019) is mounted on a white plinth that slopes outward and internally lit base that supports a large U-shaped, thick curved glass desk top.

Camera center is a light wood wall with horizontally mounted monitor, which is flanked by three vertically mounted video panels on either side that can be used to showcase city views, all framed out with silver metallic frames and off white walls. 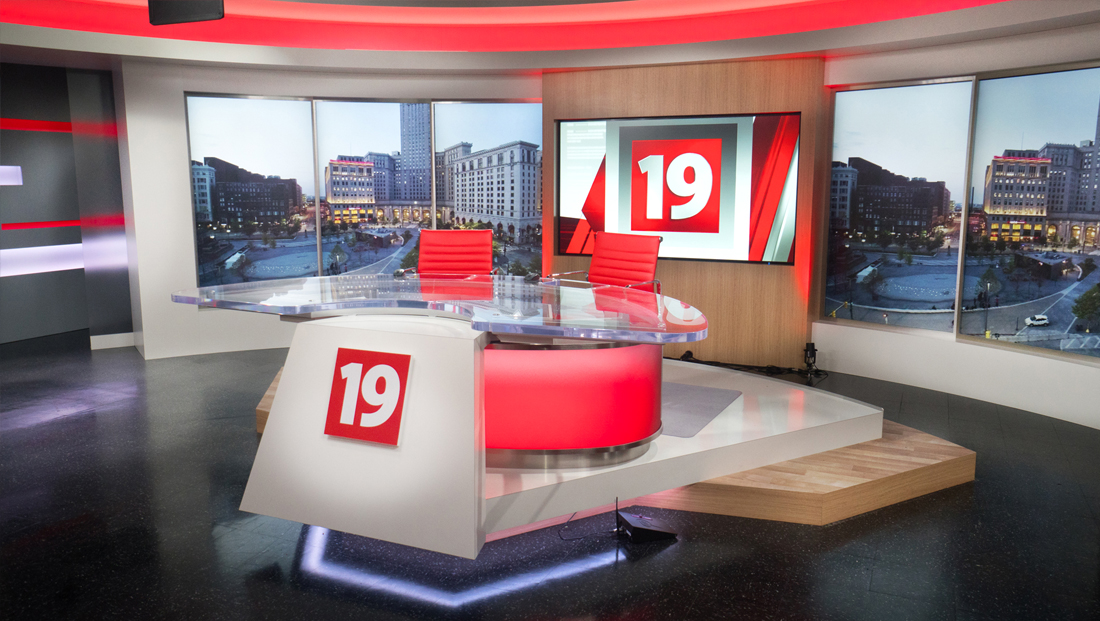 The new set also includes an interview area with a 3 × 3 video wall array framed by light black and white photography of city architecture and a wood base wall.

An additional nod to the city is a dimensional version of a well known stylized “Cleveland” logo mounted to a coffee table.

The station had to get special permission from the Cleveland Visitors Bureau to use the typography. 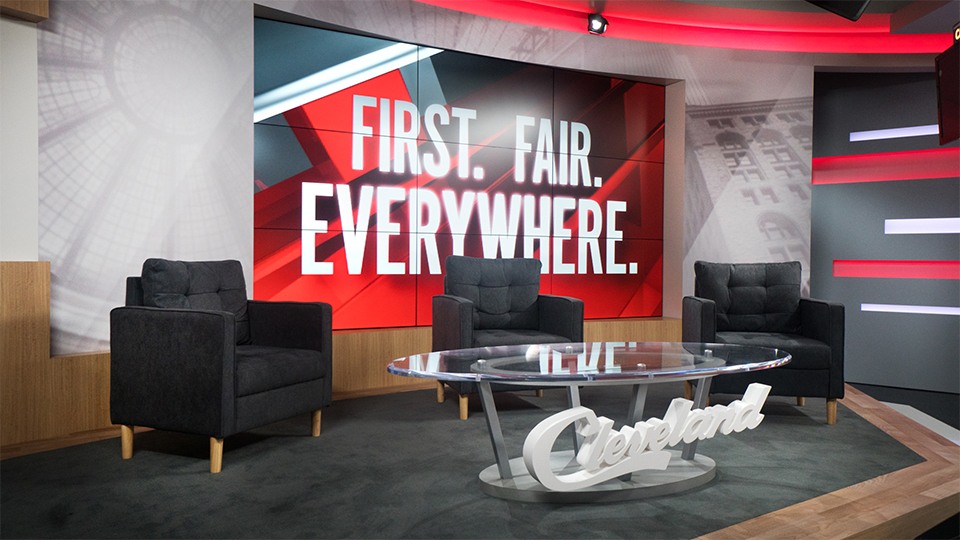 Camera right of the anchor area are openings that lead to a sort of hallway that runs in front of weather center with horizontally mounted touchscreens installed on the wall supports between the openings. 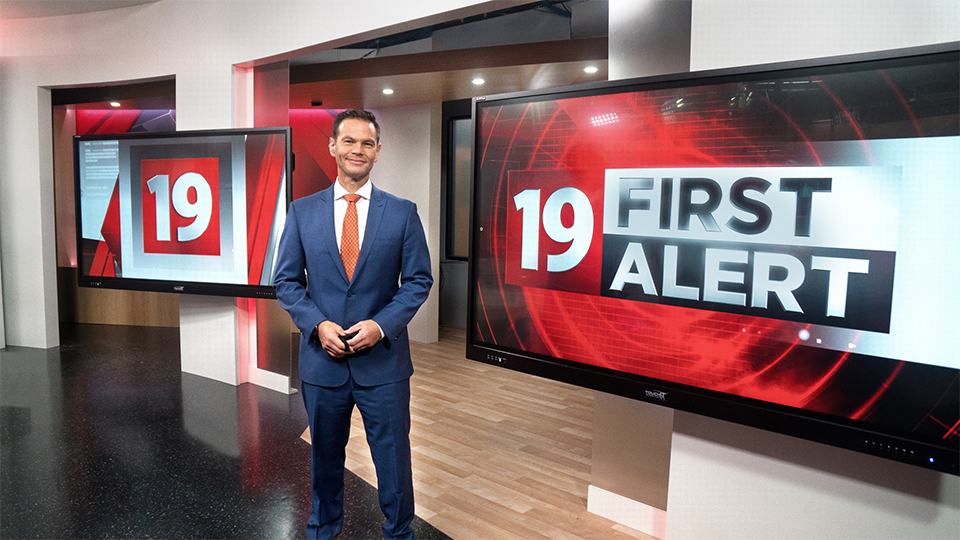 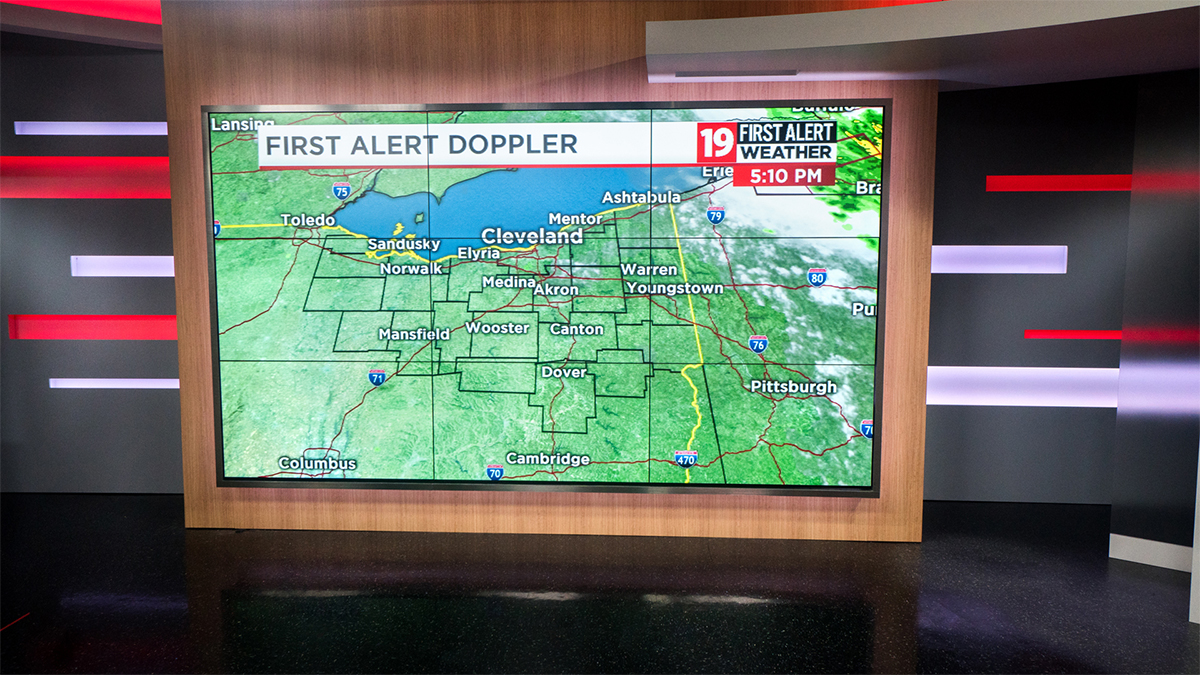 WOIO’s studio cameras are fixed PTZ models installed from the ceiling, so careful attention had to be paid to how different elements lined up.

The new set was lit by Nicholas Hutak of Block Light Shoot, who worked with the integrated can lights and integrated elements BDI placed throughout the set, as well as incorporating subtle accents of red, such as the two beams on the right and left side of the anchor center monitor that also catch on the conferred head.

Other accents include washing the logo on the front of the desk with light while also avoiding glare on the multiple on set video panels and frosted elements when appearing on air.

The set as a whole is arranged in a rough circular layout, a structure that is driven home by the curved walls and ceiling elements.