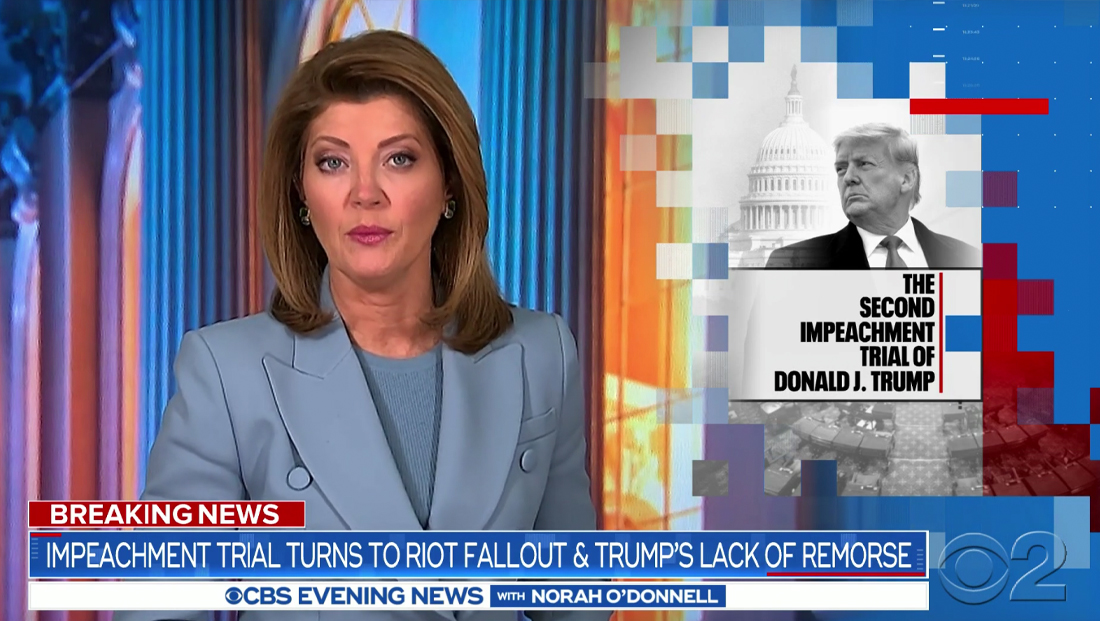 “CBS Evening News” anchor and managing editor Norah O’Donnell has been broadcasting from an alternative location as a safety precaution.

The entire “Evening News” was broadcast from outside its normal studio Thursday, Feb. 11, 2021 and again the following night.

A source tells NewscastStudio the move was made out of an abundance of caution after someone in the broadcast facility tested positive for coronavirus.

O’Donnell had anchored special coverage of Donald Trump’s second impeachment trial from the studio earlier in the day Feb. 11, but switched locations between that report wrapping and “Evening” starting.

She continued to anchor impeachment trial coverage remotely Feb. 12, 2021. According to her intro at the start of this report, she was still “in the nation’s capital.”

O’Donnell appeared to be in front of a large TV monitor or panel with the same (or similar) stylized background of the Capitol dome windows that the newscast has used since it debuted from Washington, D.C.

However, the OTS graphics that normally appear on the video wall in the studio were instead inserted on top of the video feed, a practice the broadcast has done for editions that originated from the field in the past.

During the special report Feb. 12, a black and white image of the Capitol dome with CBS Special Report graphics was shown behind O’Donnell, similar to what would have been used in studio.

It appears that the bureau studio was still being used both Feb. 11 and 12 for correspondents as well as for “video on video” shots that incorporated the set’s video walls.

The broadcast shares the space with Sunday political affairs program “Face the Nation,” though the latter uses virtual set extension style graphics on the plentiful video walls to create a unique look.

“NBC Nightly News” has originated from anchor Lester Holt’s home for much of the past year due to the coronavirus pandemic. The network installed what essentially amounted to a mini, professional grade studio in his New York City home.

ABC News has continued to originate its “World News Tonight” newscast mostly from its Studio TV3 complex during most of the pandemic.

According to multiple published reports and insiders, most networks are using pared down staff and crew, with anchors sometimes alone or nearly alone in the studio.

CBS notably suffered a coronavirus outbreak in its New York broadcast center and an adjacent office in the spring of 2020 that forced the network to close both for the safety of its employees.

‘CBS This Morning’ goes to Washington as NYC facilities get sanitized

“CBS This Morning” spent some time using the “Evening News” set in Washington before using the Ed Sullivan Theater, normally the home of “The Late Show with Stephen Colbert,” for a time as a result of that closure.

Several of the show’s hosts anchored from home or alternate locations over the spring, though the show has since returned to using Studio 57 in the CBS Broadcast Center for most studio segments.

Insiders say that most networks have gone to extended efforts to ensure broadcasts can continue in the event of an outbreak — including reports of “clean” control rooms kept off limits and sanitized at the ready as well as deploying camera setups at multiple anchor’s homes or alternative locations.

Most networks have extensive contingency plans in the event that one of its facilities goes offline either due to a technical meltdown or emergency, but the pandemic left many scrambling to create alternative setups. As the COVID-19 crisis waged on, many of these were upgraded and improved upon.

It continues to be common to see guests and correspondents joining broadcasts from home via video conferencing solutions (and varying degrees of quality) while networks work to limit the number of people in studios, typically reserving these spaces for key talent though, as in O’Donnell’s case, they can often be sent to alternative locations for safety.