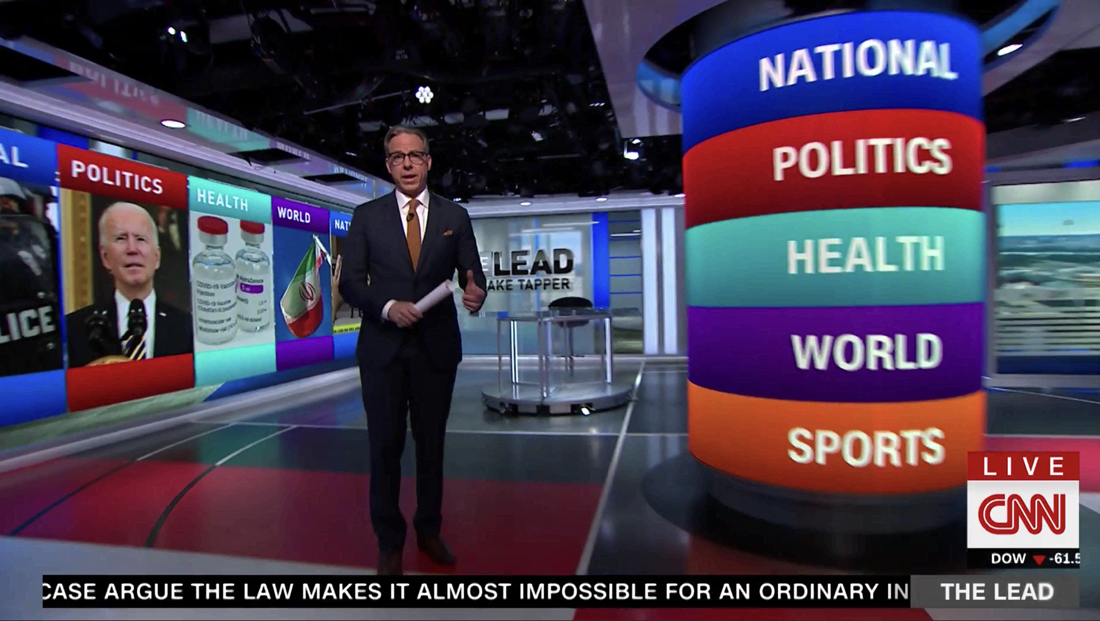 When CNN’s “The Lead with Jake Tapper” expanded to two hours April 26, 2021, the show got a new look that also gave it the appearance of taking up more studio space.

Back in January 2021, CNN announced “The Lead” would expand to two hours, displacing 60 minutes of “The Situation Room” and along with that change, the network opted to update the show’s graphics to include new opens and the addition of virtual set extensions.

The show continues to broadcast from Studio D in the network’s Washington, D.C. bureau, from the set installed in 2018 and designed specifically for it and “Inside Politics.”

For the occasion, “The Lead” received an updated logo and open focused on silver, gray and black with the show’s trademark color coding providing most of the color.

The open itself appears to take place within a (virtual) space “below” the studio, as illustrated by the path viewers are treated to that transitions from a wide view of the studio down a short flight of stairs and into a “hallway” with large floating “panels” suspended by wires to showcase the show’s top three stories. 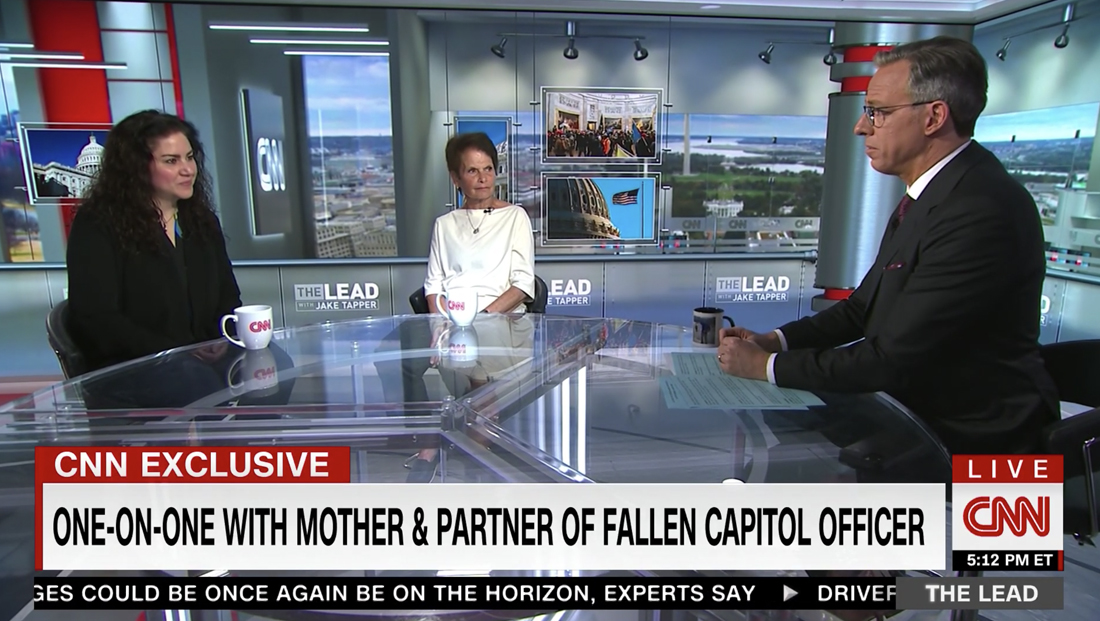 ‘The Lead,’ like many shows, has slowly been bringing in-studio guests back and placing them in front of virtual set extensions, as shown here. Almost everything visible on screen with the exception of the desk, is a graphic fed to the floor to ceiling video walls in the studio.

In additional to an L-shaped seamless video wall array, the studio also includes a triptych of stepped portrait orientation video panels that “The Lead” has made heavy use of when breaking down stories into its color coded categories with names such as “The National Lead” and “The Politics Lead.”

The existing column wrapped in curved LED can be used to showcase a stacked color coded legend of the various “leads” the show uses as well as being accented with a faux structural surface and color changing bands and the illusion of metallic and glass panels that flip in and out of view showcasing the show name and topical imagery. 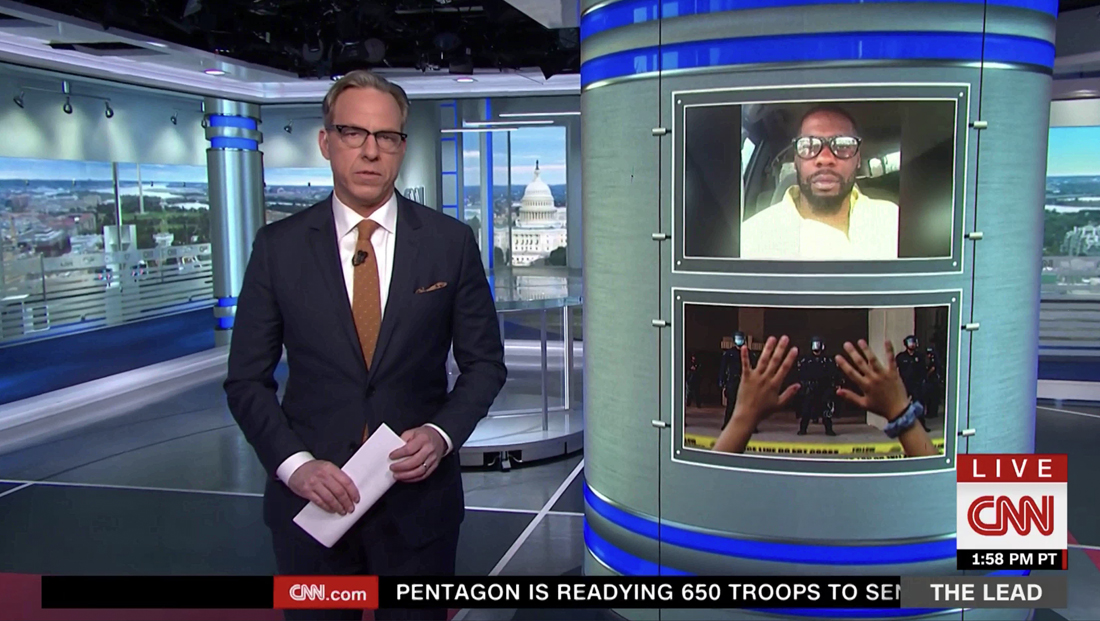 This approach is used mainly at the top of the second hour and incorporates the floating panel look from the open in the form of a duo of “framed” images on the column that can slide up and down along the virtual wire.

The more traditional flat video walls, which have also been used to create an alternate version of the “New Day” set in New York, featured graphics with simulated walls, ceilings, frosted elements, accent lighting and windows with Washington, D.C. “views.”

‘New Day’ recreates its NYC studio look in D.C. thanks to video walls

There are also small empty “workstations” visible in some spots, while all of the virtual set extensions make heavy use of layering and depth as well as other accents inspired by the open, show graphics and the structural parts of the studio itself.

CNN has also made some subtle changes and updates to the video wall graphics since debuting in April. 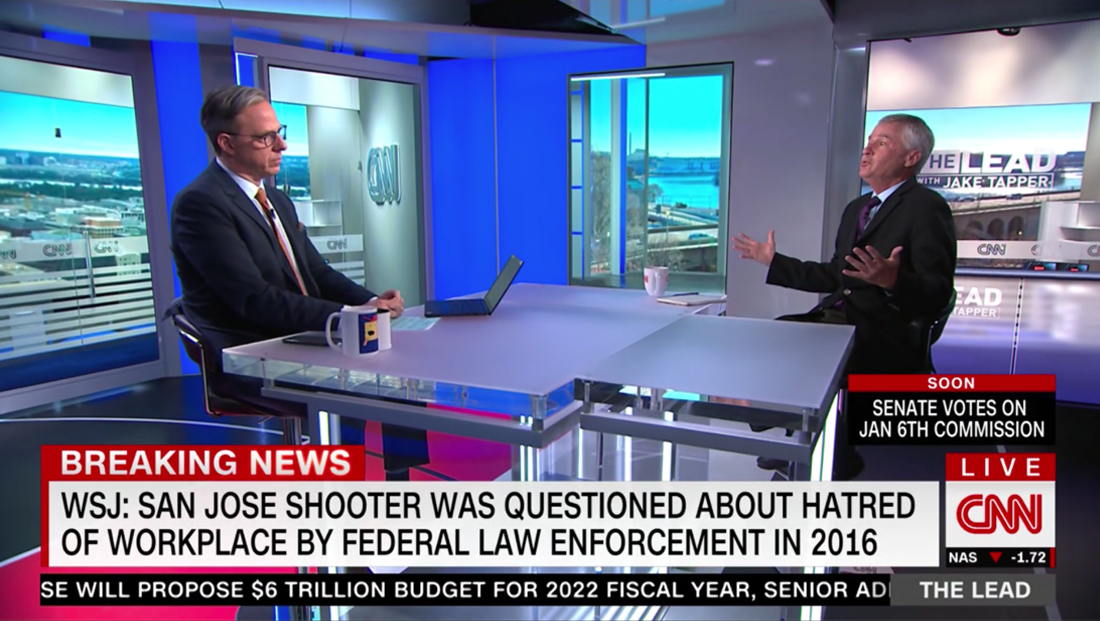 The look has similarities to the virtual set extension look used by CBS News’ “Face the Nation” to give the set it shares with “CBS Evening News” a unique look.

In the corner of the video wall, there’s also a virtual recreation of a column with a similar look to the one created using graphics fed to the curved LED installation. The virtual set extension also feature plenty of areas that can change color to coordinate with the current “lead” being covered. 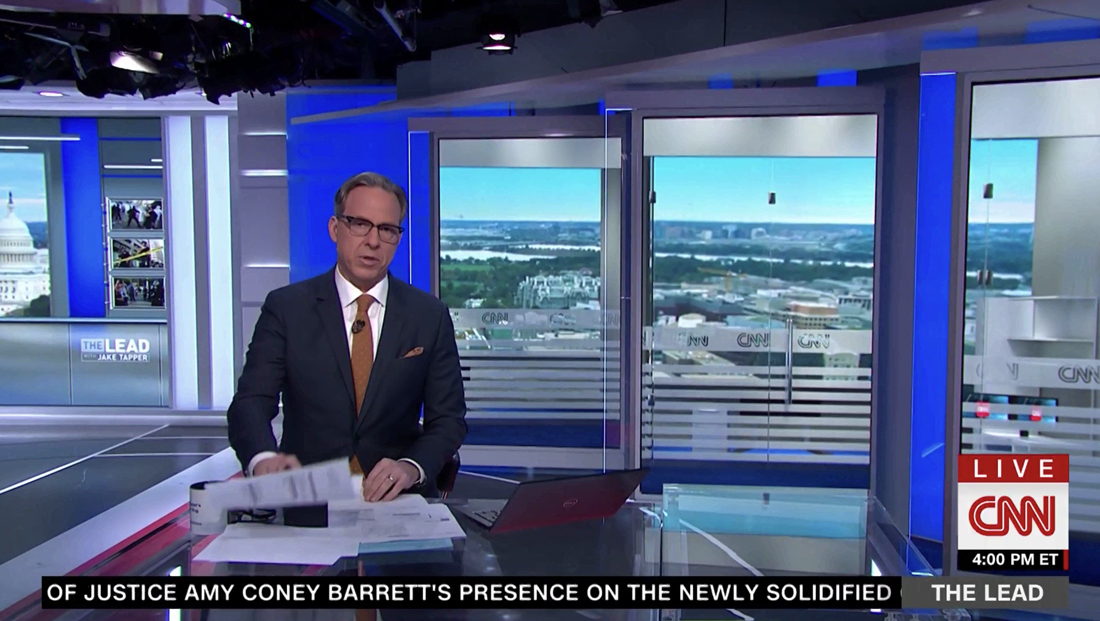 The trio of vertical screens can showcase a simulated wall of glass, with the topical, color coded graphics sliding in from the bottom and using the two far left panels.

Studio D was previously known as the “Capitol View” set because it once featured real windows overlooking the Capitol dome.

Back when “The Lead” debuted in 2013, the show shared studio space with other CNN Washington programming but differentiated the multipurpose set by adding panels with vertical banding to the walls.