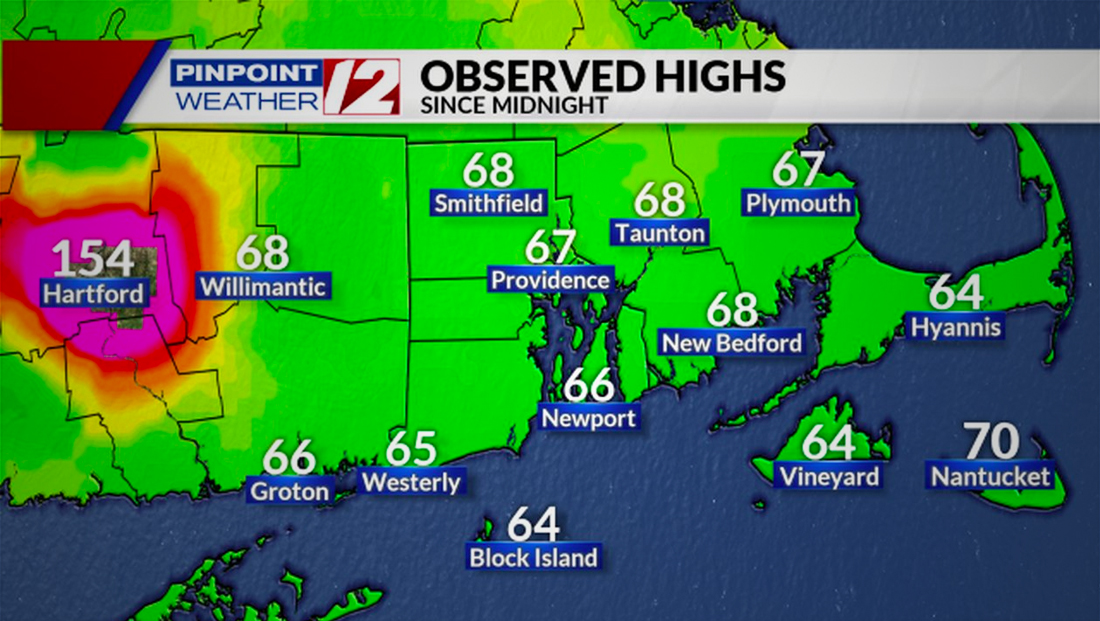 Multiple stations reported that the weather in Hartford, Connecticut, was a whopping 154 degrees June 12, 2021.

A meteorologist at one of those stations, WPRI in Providence, Rhode Island, T.J. Del Santo tweeted a screen grab of an “observed highs” map. The other locales on the maps were in the mid to high 60s, with Nantucket hitting 70.

Hartford, however, was situated in the middle of a bright yellow, orange, red and pink blob and labeled as 154 degrees.

On many weather maps, reds and pinks are used to represent higher temperatuers, while orange, yellow, green, violets and blues are often used to represent colder ones (descending in roughly that order), though worldwide temperature increases have forced some forecasters to get creative with their color coding.

Here's a look at the high temperatures so far today… pic.twitter.com/33kHs0BypZ

It turns out WPRI wasn’t the only station to air the 154 degree temp — other stations did as well, apparently a result of a glitch with the data feed that many TV stations use.

The error popped up on a map WNBC in New York City used as well.

if you're in Hartford or the surrounding towns (my old home), I hope you've got a lot of ice water to keep yourself hydrated properly. pic.twitter.com/0VLsRioMwE

A National Weather Service meteorologist later tweeted that the error appears to have come from someone mixing up Celsius and Fahrenheit in a system called METAR that many TV stations and other media outlets tap into for data.

The actual temperature in Hartford was around 68 degrees Fahrenheit.

154 degrees Fahrenheit comes out to about 67.8 Celsius, so the explanation makes sense, though it hasn’t been independently confirmed.

Most TV news weather graphics systems pull in data such as temperatures from various sources, including the National Weather Service, since entering that amount of data would be incredibly time consuming.

In some cases, forecasters can edit or override the numbers pulled in by the weather computer system.

It’s not uncommon for weather maps to showcase unrealistically high or low temperatures a result of a variety of reasons, including simple typos (such as hitting a number twice):