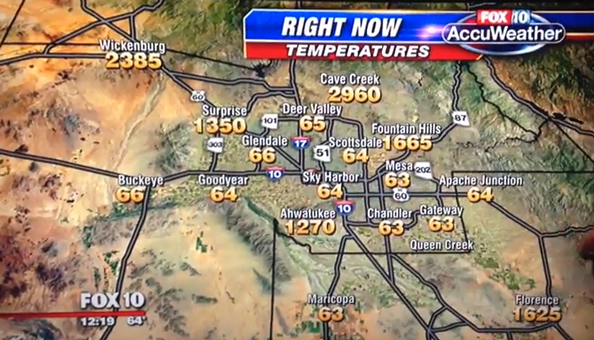 An errant number or two here and there on a weather graphic has been known to cause some entertaining TV moments (such as this and this) — but Phoenix forecaster Cory McCloskey takes the prize for not only owning up to a mistake but rolling with it.

McCloskey, giving the weather report on Fox affiliate KSAZ-TV, noticed his map had not one, not two, but six separate temperature readings in the quadruple digits — ranging from a balmy 1270 degrees to a downright toasty 2960 degrees.

Likely sensing there was no graceful way around that many typos, McCloskey simply took it with stride and incorporate the figures into his “report.”

“I’m not authorized to evacuate Ahwatukee, but this temperature seems pretty high,” he said, as the anchors can be heard chuckling in the background.

“Cave Creek, Fountain Hills — they don’t look good either and, frankly, Wickenburg is a total loss,” he said in an almost perfect deadpan while keeping up the weatherman charade by gesturing broadly to each location on his map.

“Surprise is starting to heat up at 1300 degrees,” he continued and then proceeded to let viewers know which cities were “safe spots” and even pointing out the phantom weather pattern that was surrounding those areas with hotter than Hell temps.

Meanwhile, down under in Australia, back in 2012, average temperatures were rising so much (for real) that forecasters there had to add an additional color to their maps.