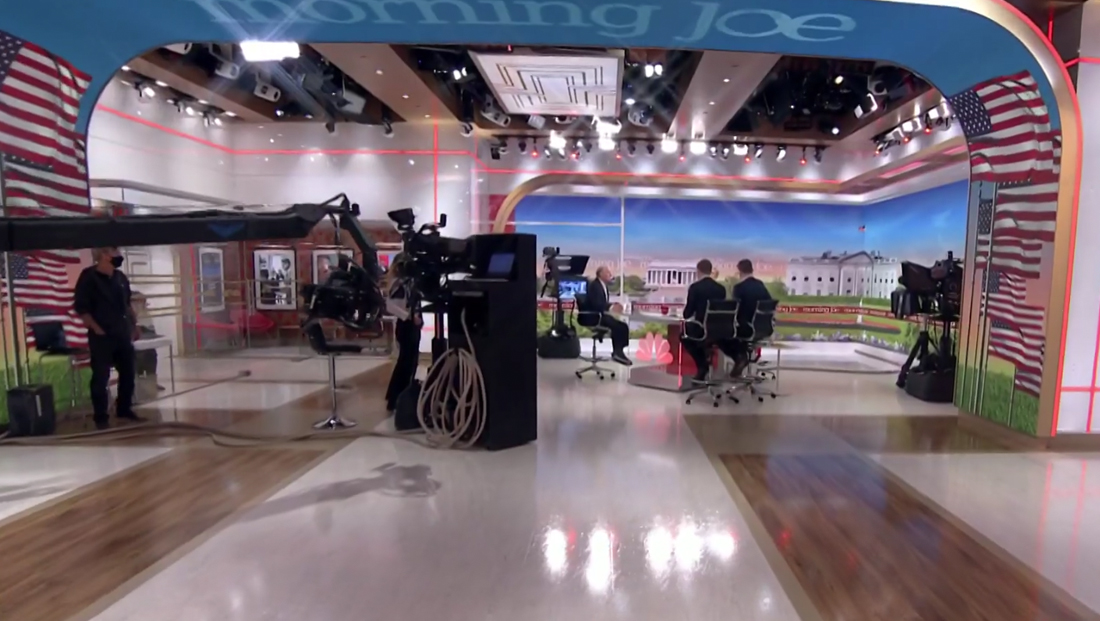 MSNBC’s “Morning Joe” moved back into the newly renovated Studio 3A for a show that included both co-anchors and multiple panel members and guests in studio.

The updated Studio 3A debuted on Monday, Sept. 20, 2021’s “Deadline: White House” and was also used for “All In” later that night.

Like it was before, “Morning Joe” primarily uses the perpendicular LED video walls in one corner of the space to showcase a stylized view of the White House. 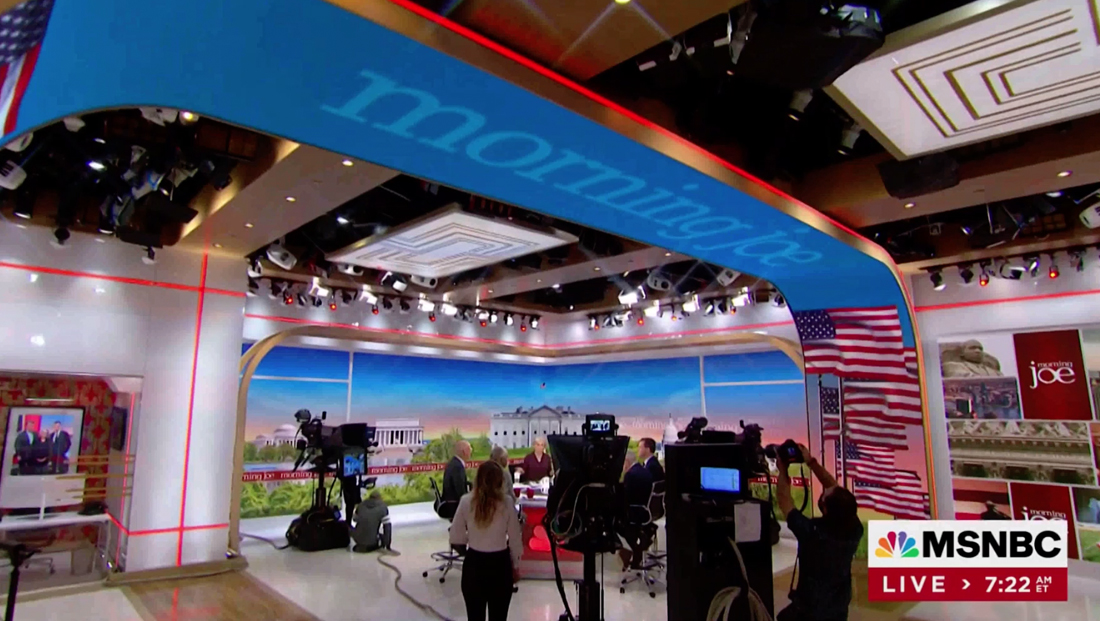 The LED arch displayed rows of American flags on both vertical sides, similar to those seen around the Washington Monument, in the same stylistic interpretation, along with the show logo in the middle, suspended part in a field of (simulated) blue sky.

Additional video arrays showcase Washington and political imagery, some of it in boxed collage type arrangements.

As a panel style show (at least in non-pandemic or remotely produced editions), “Morning Joe” is shot largely “in the round,” with cameras positioned to capture those seated around the table showing up on air frequently and that hasn’t changed.

For guests seated camera left, the background showed off more of the glassed in walkway that runs along that side of the studio, giving glimpses at the glass’ vinyl art deco and NBC branded graphics, along with the staggered gold peacocks set against red. 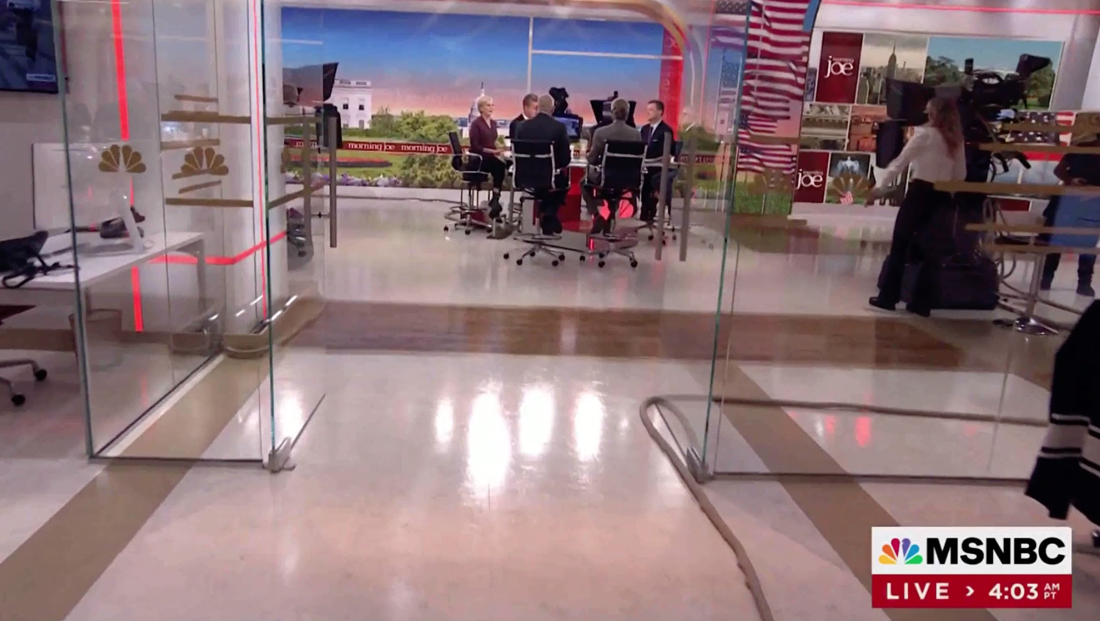 At one point, guest and U.S. Special Presidential Envoy for Climate John Kerry was shown waiting in the open seating area, while another bump had a handheld camera walk through the studio entrance, through the passageway, and then through the propped open glass doors on to the set. 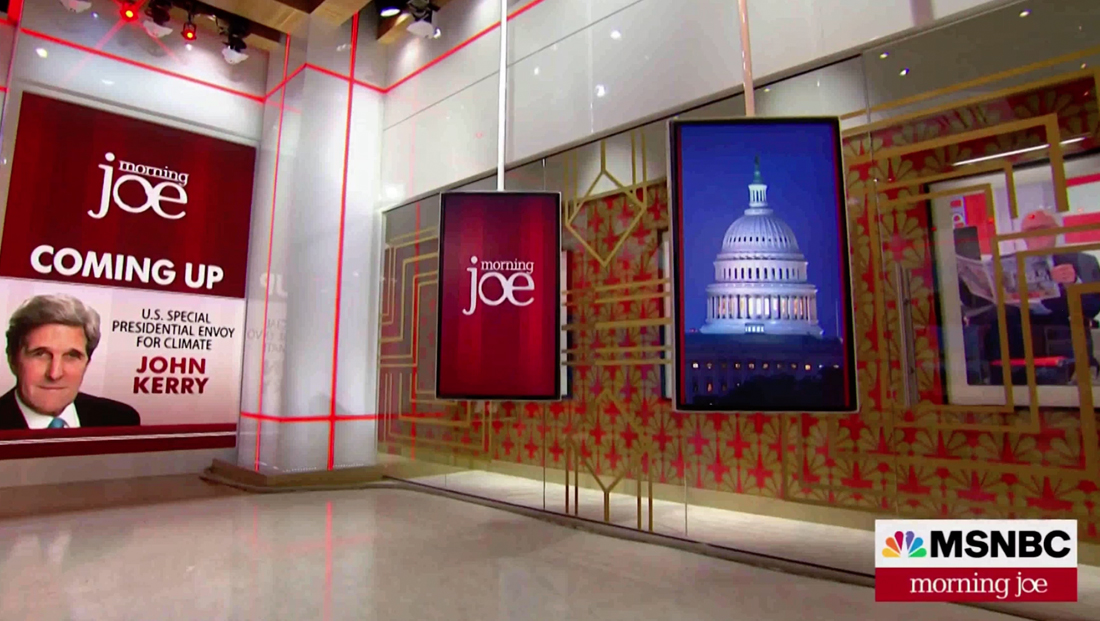 Other bumps incorporated the tracking vertical monitors in front of this glass wall along with the vertical arrays on either side of structural archway opposite the “Morning Joe” home base, showcasing a full color NBC peacock in the center and a cloudy sky with the show logo overlaid.

“Morning Joe” has not originated from Studio 3A since June 2021, which also marked one of the few times since then that co-hosts Mika Brzezinski and Joe Scarborough both appeared on the show due to conflicting schedules and the fact 3A had been under construction since late June 2021.

Brzezinski and Scarborough also also subject to a unique arrangement where one or both of them frequently originate from a studio built inside a residence in Florida.

Scarborough is technically a Florida resident, a move he made to avoid paying state income tax, so he must be in the state at least 183 a year, so MSNBC created the remote studio well before the pandemic forced many newscasts to full or remote production.