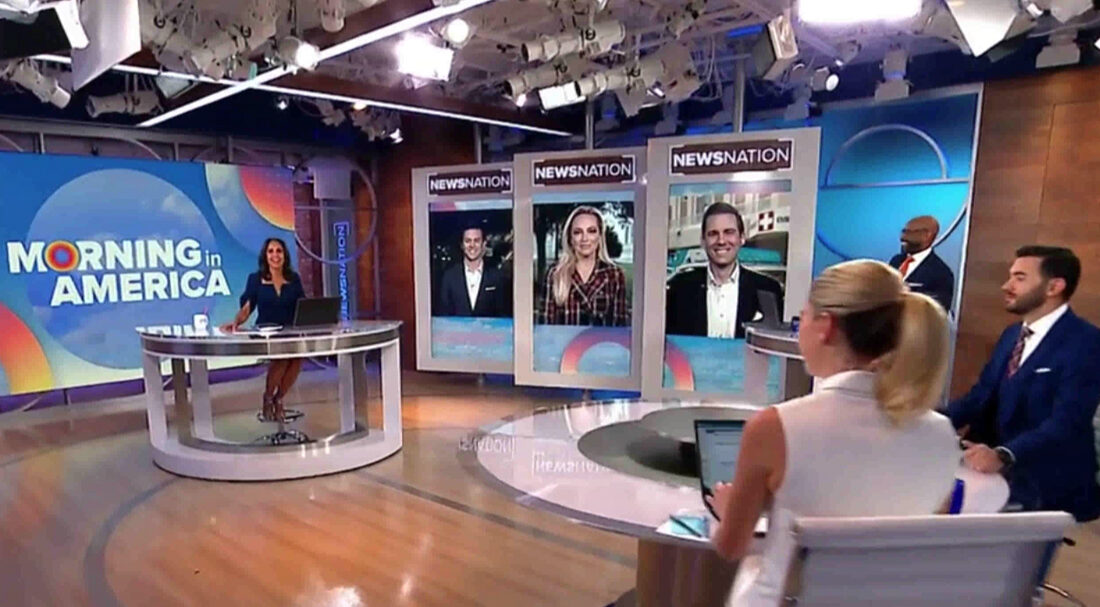 NewsNation’s morning show “Morning in America” debuted Monday, Sept. 27, 2021, from the network’s open newsroom set accompanied by its own iteration of the network’s graphics package and some new scenic elements.

The three-hour show starts at 7 a.m. eastern and is anchored by former ABC News anchor Adrienne Bankert with an ensemble of talent who move around the studio as the show progresses, including midwest correspondent Nick Smith, entertainment reporter Sloane Glass and meteorologist Gerard Jebaily.

The program originates from NewsNation headquarters inside the historic WGN building in Chicago.

Bankert herself sits a new half-circle, raised desk on a high chair (that she said she was “literally jumping out of” from excitement over the launch despite being fully seated).

There’s also been two additional curved standing desks and a circular desk added to the mix.

Bankert kicked off the show standing in front of the “bracketed” video wall with curved portion on one side of the second-floor studio that’s open to the network’s newsroom.

She then moved to the larger of the new desks, which was placed in front of the other large video wall installation in the space, which is situated in front of a wall backed with faux brick next to a three pack of portrait monitors.

At the top of the show, Jebaily and Glass were seated at the circular table with laptops with Smith standing at the smallest of the new curved desks while three live shots (or look lives) from across the country were shown on the triptych of monitors, all of which were featured on air thanks to a handheld camera.

Bankert would also use the circular table for an in-studio interview with a Chicago area doctor, while Smith presented in front of the wild touchscreen monitor typically positioned at the end of the curved LED, which has been dubbed the “Smart Board.”

There’s also a small weather workstation set up next to the bracket video wall next to the final new presentation desk which was what Jebaily used to deliver his forecasts.

Glass, meanwhile, used the integrated wall screen camera left of Bankert’s home base for her reports, with the panel display the show’s logo.

Ahead of the launch, the studio space was relit by Dennis Size of The Lighting Design Group, along with a recent update in the main NewsNation studio.

The show’s graphics package combines looks from the original NewsNation package, but adds in brighter pastels and circular elements, including the “O” in “Morning” that’s interpreted as a three ring “sun” in yellow, orange and violet.

Similar gradient rings are used on the video wall backgrounds on set, along with widely spaced dotted matrix patterns. The open and other animations also feature rings rotating around a circle that backs up the show’s logo — and the shape is also reflected in the curves of the show’s new anchor desks and tables.

While much of the NewsNation look is rectangular and right angles, the network’s main set in Studio 3 downstairs is outfitted with a large wall backed with what are referred to as “crop circles” that are subdivided into various segments, which is also suggested by the different sizes of the new desks.

Both spaces were designed by Clickspring Design.

Lower third insert banners use the basic segmented, rectangular NewsNation look but use a combination of blue and bright tan accents.

Like many morning shows, “Morning in America” plays brief clips of popular music going to and from breaks, but the NewsNation signature from Stephen Arnold Music is also audible throughout the show.

With the exception of weather graphics and Smith’s data driven graphics on coronavirus vaccinations, the show shied away from using any topical graphics. For example, it would have been logical for a Tony Award OTS-style graphic to pop up in the screen next to glass in her toss the package on the ceremony, but it stayed on the show’s logo the entire time.

“Morning in America” kicks off the network’s morning — with another schedule change slated for later in the day to make way for ABC legal analyst and former “Live P.D.” host Dan Abrams from New York City.

NewsNation has made numerous programming changes since its launch about a year ago, including recruiting bigger names in broadcasting such as Abrams and Ashleigh Banfield, but that’s done little to improve its minuscule ratings.