Why do presidential debates have such simple looks? 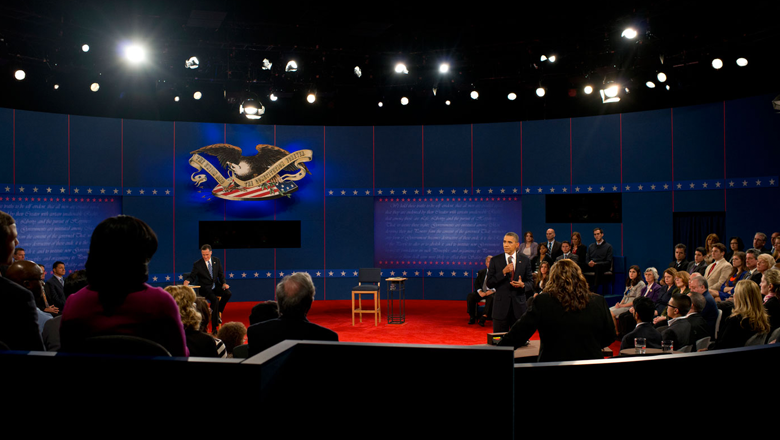 In the age of massive video walls and animated graphics, it might seem odd that the presidential debates still have the rather plain and simple look and feel they have had for years — but there’s a very good reason for that.

Some background information — first, and most importantly, this post is only concerning the general election debates — in other words, the debates held after the major party candidates have been selected.

The primary debates, which typically not only feature a much larger number of candidates, are also sponsored and produced by a variety of organizations and media outlets, who are free to create their own looks as they wish.

The “big” debates, however, which feature the major party candidates, are organized by the nonprofit Commission on Presidential Debates. President Barack Obama during the 2012 debate. Photo courtesy of Obama for America campaign.

The commission, together with the candidates, negotiate the general format, rules and style of each of the several presidential and vice presidential candidate debates every four years.

On the night of those debates, the commission provides media outlets with “clean” feeds from inside the debate venue. Each network, however, decides how and when to use each shot as well as any accompanying graphics.

In other words, every network, online media stream or other media outlet out there has access to the exact same feed which is, for the most, part, dominated by single shots of the candidates at the lectern.

To avoid distracting from the key issues at hand, the commission opts to keep its debate set, no matter the layout or venue, simple and to the point — so that the visual focus remains on the whoever is speaking — whether it be the candidate, moderator or audience member.

The though exact layout varies depending on the style of debate — whether it’s standard lectern-style, in the round town hall or seated at a table, key elements have remained essentially the same — blue backgrounds, red carpet, laminated wood-toned furnishings, the commission’s eagle logo and the requisite camera ports. Going back as far as 1988, the commission used blue curtains backgrounds behind the candidates. Then, for a stretch, the curtains became solid blue walls and the lecterns become blocky, top-heavy affairs in a blonde wood tone that typically matched any moderator or panel desk that was needed. These debate sets also typically featured a wide, blacked out cut out in the center that hid the cameras used to capture both the moderator or panel and, if applicable, audience shots.

Except for formats that allow direct audience participation, the moderator or panel typically sit with their backs to the audience, which remains clouded in darkness during the actual debate, meaning the background is essentially just a black “curtain.” In 2004, the set was updated a bit. It still featured blue walls, but a header with white stars and both horizontal and vertical red lines was added, including in the backgrounds behind the candidates. For the next round, in 2008, the debate commission made the rather daring (for them) move to add a lighter blue background featuring the text of the Declaration of Independence written in an old-fashioned script.

This look, incidentally, became engrained in many people’s minds after “Saturday Night Live” created a mini version of the set for its sketches featuring Tina Fey as then vice presidential candidate Sarah Palin.

The debate set can be expanded as needed by essentially adding additional wall sections, camera portals and backgrounds — which typically is key for any town-hall or forum style debates that might be scheduled.

Another fixture of the debate set is the large, cutout eagle logo that the commission uses. This is typically mounted in the center of the set, above the camera port, and dramatically lit with accent lighting.

For 2016, the commission has confirmed a similar debate set, featuring the declaration text, will be used, though with some updates.