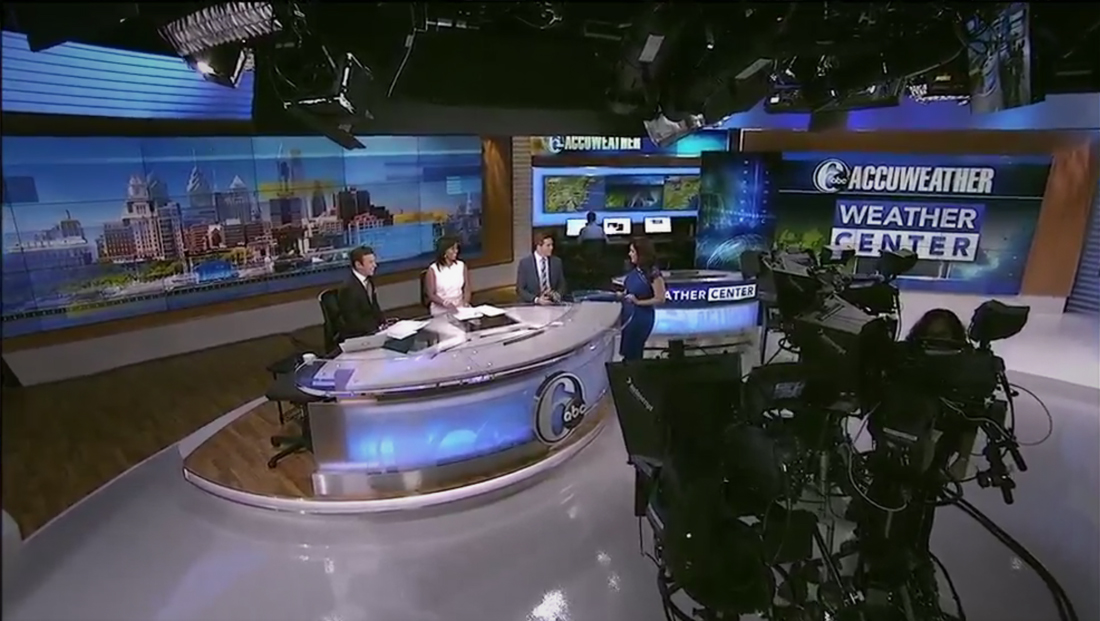 WPVI, the ABC O&O in Philadelphia, has debuted a new set, graphics package and augmented reality weather technology that draws on a mix of curved elements and rectangular shapes. At the anchor desk, the video wall behind it is used to display a stylized cityscape with blue and yellow animated bars that move horizontally as well as topical text between anchors on two shots.

The goal of the video walls goes beyond just being high tech.

In a package introducing the new look, the station’s news director, Tom Davis, says the video walls from Primeview will “help us use video in a better and more complete way and be able to communicate better with the viewers exactly what the story is.”

The anchor desk itself features a curved, backlit frosted glass front with a dimensional logo at the center. The studio also features two additional video walls for standups and other segments, including one with vertically mounted pivoting panels, as well as one located behind the curved weather presentation pod, which has a similar look as the anchor desk. Behind the weather center is a work area with backlit blue banded wall.

The large video wall juts out into the opening to the weather work area and used mainly for weather segments, including augmented reality setups.

The far left column of panels often displays a generic weather graphic, with the remainder of the video wall used for standard 16:9 weather graphics.

The set also includes a revamped “Big Board” interactive touchscreen that can also be used as a standard OTS element for in-studio standups.

Above this new screen is an LED ribbon that lets the branding be changed instantly from a generic “Action News” graphic to breaking news or numerous other options.