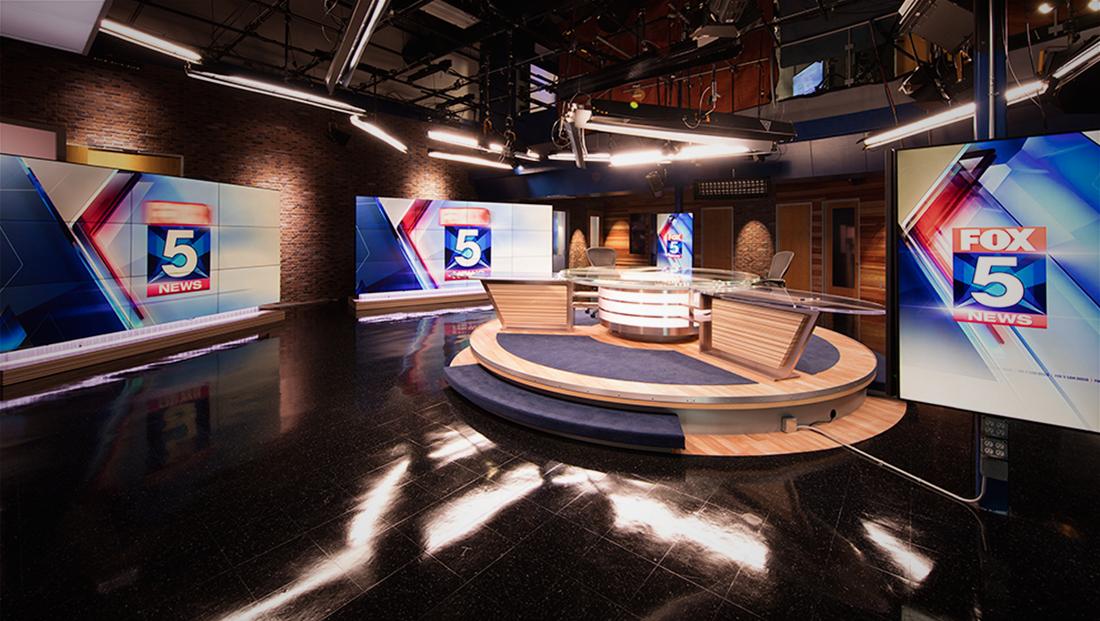 The brick is inspired by the city’s Gaslamp Quarter. Additional backlit panels provide a brighter look and clean lines, while two glass panels offer tinted views of the monitors in the control room, including one frosted with shapes textures by the station’s graphics package, which is similar to the one used by sister station KDVR in Denver. Also placed around the periphery of the studio space are two freestanding video walls. One measures 12 feet wide and 7 feet tall, while the other is 16 feet wide by 7 feet high.

Both video walls are strategically placed to be used in a variety of ways: as backgrounds for the anchor desk, in standup shots, or to appear in wide and toss shots.

Additional reporting venues are found around the periphery of the studio near additional flat panels.

For weather, a hidden chroma key wall prevents the bright green surface from showing up in wide shots of the space.

To the light the large space, wide bands of LED lighting units are used — but in many ways become part of the scenery itself, forming a sort of interconnecting pattern floating above the studio.

In addition to these units, smaller, more focused lighting instruments are used to bring out the texture on the walls, giving some areas a darker, more dramatic feel. 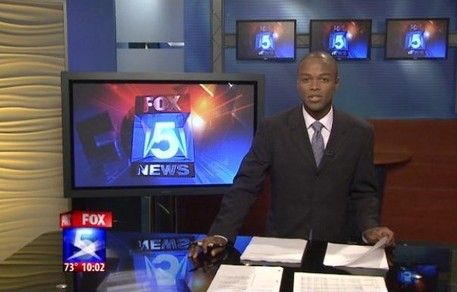 “Serving our community is very important to us and we’re pleased to present viewers with a completely redesigned Fox 5 News set that captures our ‘So San Diego’ brand, while complementing the 10.5 hours of quality local news we continue to deliver viewers throughout San Diego,” said Scott Heath, Fox 5 president and general manager, in a statement. “It’s a constant goal of ours to create innovative ways to deliver content on broadcast and digital platforms. This new 360-degree set creates a dynamic environment that will bring the viewer along for the ride during the broadcast,” said Rich Golder, the station’s vice president and news director.