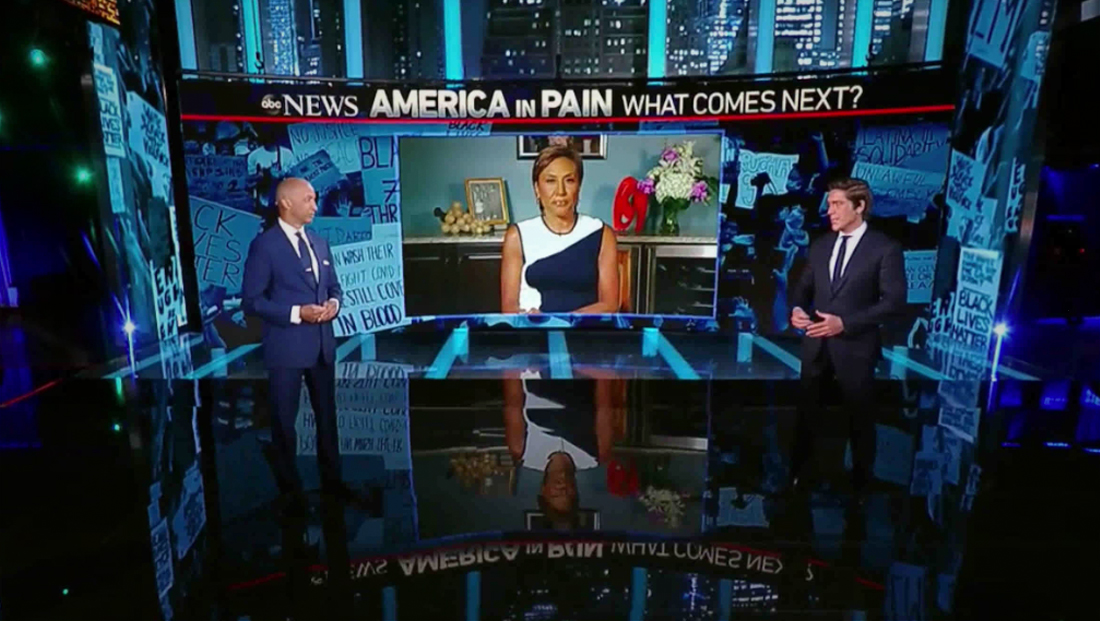 The special, which was hosted by “World News Tonight” anchor David Muir, correspondent Byron Pitts and “Good Morning America” anchor Robin Roberts, originated mainly from one end of the set that debuted on Super Tuesday in March 2020.

The network most recently used the main portion of the studio Saturday, May 30, 2020 for its coverage of the Crew Dragon SpaceX NASA launch.

“America in Pain” focused on the growing social unrest and tensions following the alleged murder of George Floyd in Minnesota — and ABC’s special name notably follows the same linguistic pattern as the network’s “America in Crisis” branding for its overall coverage of the issue.

Other programming, including “World News Tonight” and the network’s early morning news blocks “World News Now” and “America This Morning,” also normally originate from parts of the multivenue studio and its “little sister” area designated TV3B.

For its “America in Pain” special, Pitts and Muir were in studio and stood in front of the curved video wall on one end — with Roberts’ live image appearing between them on the LED — providing a convenient social distancing arrangement.

The special did not use the opposite side of the studio or any anchor desks — nor was the in floor LED featured prominently.

Single cross shots of Pitts and Muir, meanwhile, showed off the small alcoves on either side of the video wall, which have been mostly cloaked in darkness until this point, with textured walls and additional video panels visible.

For on set graphics, the special used blue tinted imagery of protesters and their signs, which were prominently featured on both the curved video wall as well as the video ribbons and lower resolution panels installed behind the curved segment, which can be mechanically raised and lowered.

ABC previously used the studio for a special edition of “20/20” during the earlier days of the coronavirus pandemic.

When the new set debuted in March, ABC execs indicated they would slowly phase in the space across most of its platforms.

The pandemic has forced most networks to scale back on production values but ABC has has been starting to flex its muscles to showcase the flexibility of its new studio in recent weeks.