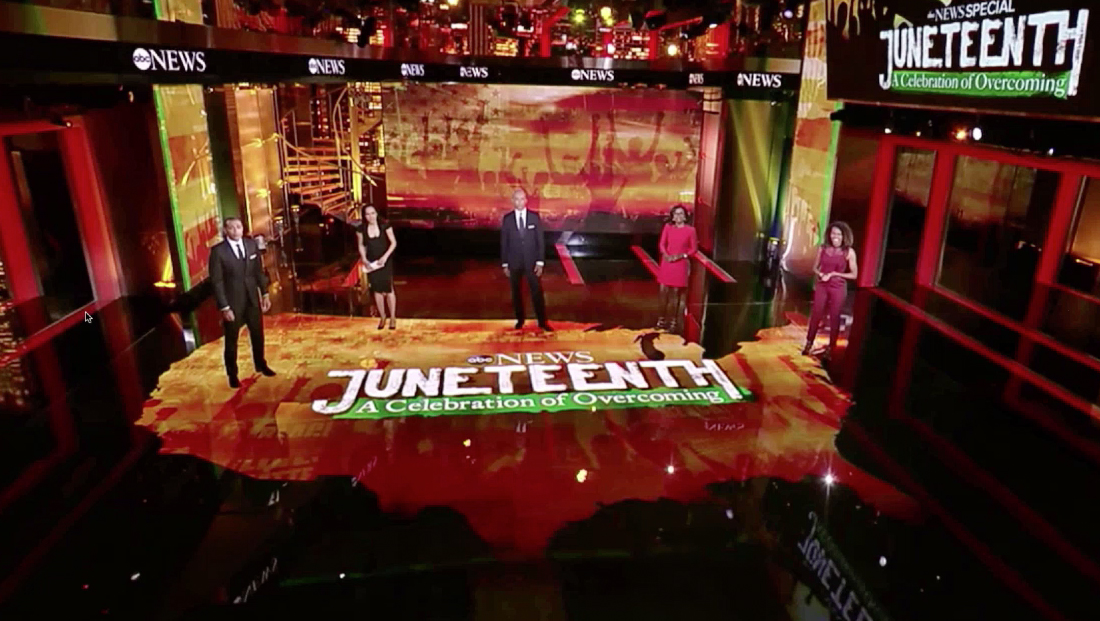 ABC News once again showcased the flexibility of its expanded and revamped Studio TV3 set — this time through the use of warmer shades and textural elements — with a Juneteenth special Friday, June 19, 2020.

The special featured hosts Linsey Davis, Byron Pitts, Deborah Roberts, TJ Holmes and Janai Norman spread out across the studio’s LED floor, which was used to display a stylized map of the United States and show logo.

The special made generous use of wide jib shots and tighter handheld shots that included on air movements as one host stopped speaking and the next one took over.

Instead of the curved video wall used as the primary backgrounds during a previous race special and SpaceX launch coverage, the Juneteenth show used the video wall on the opposite side of the space, using it showcase a vibrant cityscape and textured American flag graphic with silhouettes of people.

The redesigned TV3 debuted in March 2020 for Super Tuesday and has also been used for a coronavirus special.

The smaller alcoves on either side were also used as backgrounds behind the far left and right hosts while the spiral staircase leading to balcony level also appeared prominently.

The studio’s two LED “billboards” above each alcove were also used for video on video shots while pitching to packages.

The special utilized a logotype with an organic, hand drawn texture with a similar green banner below for the subtitle, which was set in a serif font. Orange-red backgrounds were also used prominently.

“Juneteenth” started with an extended open featuring a female announcer — though not the one ABC has been favoring of late.

ABC also switched the internally lit column and header elements to a deep red, while gold and green uplighting was incorporated as well.

This latest implementation of the space showed that despite its sleek and modern look, the space could also emit a warmer more textural look and feel built around earth tones rather than the more traditional news styles seen in previous designs.