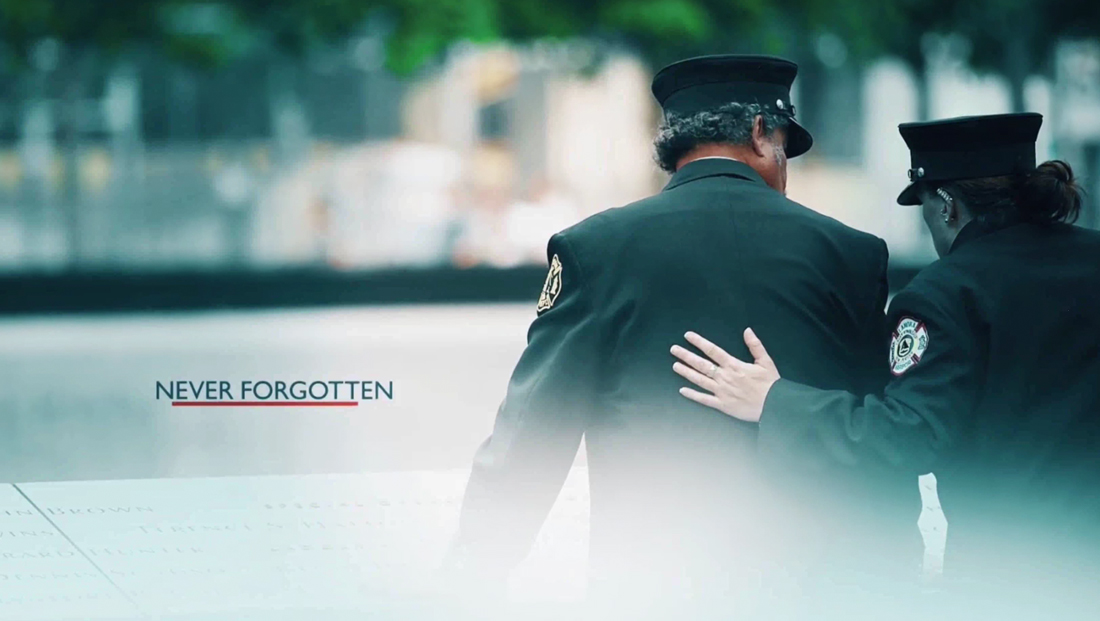 The major U.S. networks marked the anniversary of the Sept. 11, 2001 terror attacks with extended coverage that included elegantly designed looks to mark the grim milestone.

Coverage started the week of Sept. 6, 2021 and picked up as the week went on and live coverage of the annual memorial events in New York City, the Pentagon and Shanksville, Pennsylvania, airing Saturday, Sept. 11, 2021.

The networks continued to leverage the key art and branding introduced earlier in the week.

Ahead of the anniversary “NBC Nightly News” aired from Ground Zero Friday, Sept. 10, 2021, with Lester Holt opening the broadcast from along the edge of the memorial.

“Nightly” used its normal graphics but featured a modified open.

Sister network CNBC originated “The News with Shepard Smith” from Ground Zero Friday as well, with a modified open and faded graphic along the bottom of the screen that matched NBC’s look.

NBC News aired a special edition of “Today” live from Ground Zero Sept. 11, dropping its normal banner graphics for a blend of blue boxes in the lower left corner. The open used the basic design of the graphics package introduced in May 2021, but tinted blue and with updated imagery.

After “Today,” the Hoda Kotb and Savannah Guthrie were joined by Holt for additional coverage, which included an elegant open with soft music and imagery and banners representing all three crash sites.

“ABC World News Tonight” also originated from Ground Zero Friday, using its normal headline graphics with a modified open. David Muir anchored from Ground Zero, high above the memorial from what appeared to be a different angle than NBC had, with more of a focus on the transportation center and cavernous memorial.

On Saturday, ABC originated coverage from Studio TV3 at its Lincoln Square headquarters. Muir was seated on the opposite side of the space he normally uses for “World News Tonight,” with what appeared to be a feed from above the memorial behind him, Robin Roberts and Diane Sawyer.

The network utilized the plentiful LED panels in the space to create the feel that the trio were in a “canyon” of buildings, with imagery of surrounding buildings and greenery displayed.

As typically with ABC, an extended open with a dramatic female voiceover was used.

“CBS Evening News” broadcast from Ground Zero with a similar view as ABC behind Norah O’Donnell.

The broadcast used its less D.C.-centric open and included a custom announce.

On Saturday, coverage used a custom special report open that relied heavily on the network’s updated look based on pieces of the CBS eye.

A bug style graphic of also featured the “9/11” from that look, but with a carefully blended and shadow effect applied to it, an effective visual analogy of the destroyed towers and the shadow that was cast over the country after the disaster.

“CBS This Morning Saturday” (which will take on the name “CBS Saturday Morning” Sept. 18, 2021) originated from Studio 57, its normal home, with match 9/11 graphics on the video walls throughout the space.

Because it hasn’t changed names yet, it continued to use the “CBS This Morning” graphics and open. The weekday editions of “CTM” rebranded as “CBS Mornings” Sept. 7, 2021, which included a new set, graphics and anchor team.

WarnerMedia’s cable network CNN opened its Saturday coverage with a compendium of clips, including haunting audio, from coverage of the day and aftermath.

Unlike other broadcast and cable networks, Fox’s coverage aired under the titled “Fox & Friends Weekend” and “America’s Newsroom” rather than special 9/11 branding.

The network built a “skybox” style space above Ground Zero with patriotic decor and used it for its Saturday morning “Fox & Friends” broadcast that started with a special open showcasing the various disaster sites. “America’s Newsroom” continued coverage from the same location, as did other Fox programming throughout the day.

Fox was also the only one of the “big four” networks to not carry live coverage on its primary network in all markets.

Saturday’s coverage included a special open with a mix of historical footage and newly acquired video.

“Noticiero Univision” was notable in that it did not lead with 9/11 anniversary on Friday night, instead focusing on coverage of the earthquake in Mexico, though it did include extended 9/11 coverage later in the broadcast, which originated from the network’s Miami headquarters.

For Saturday, the network did originate a special report from New York, using a rooftop location with a similar view as NBC’s. An extended open with slow music focused on personal interviews, mostly in Spanish, from those affected by the attacks.