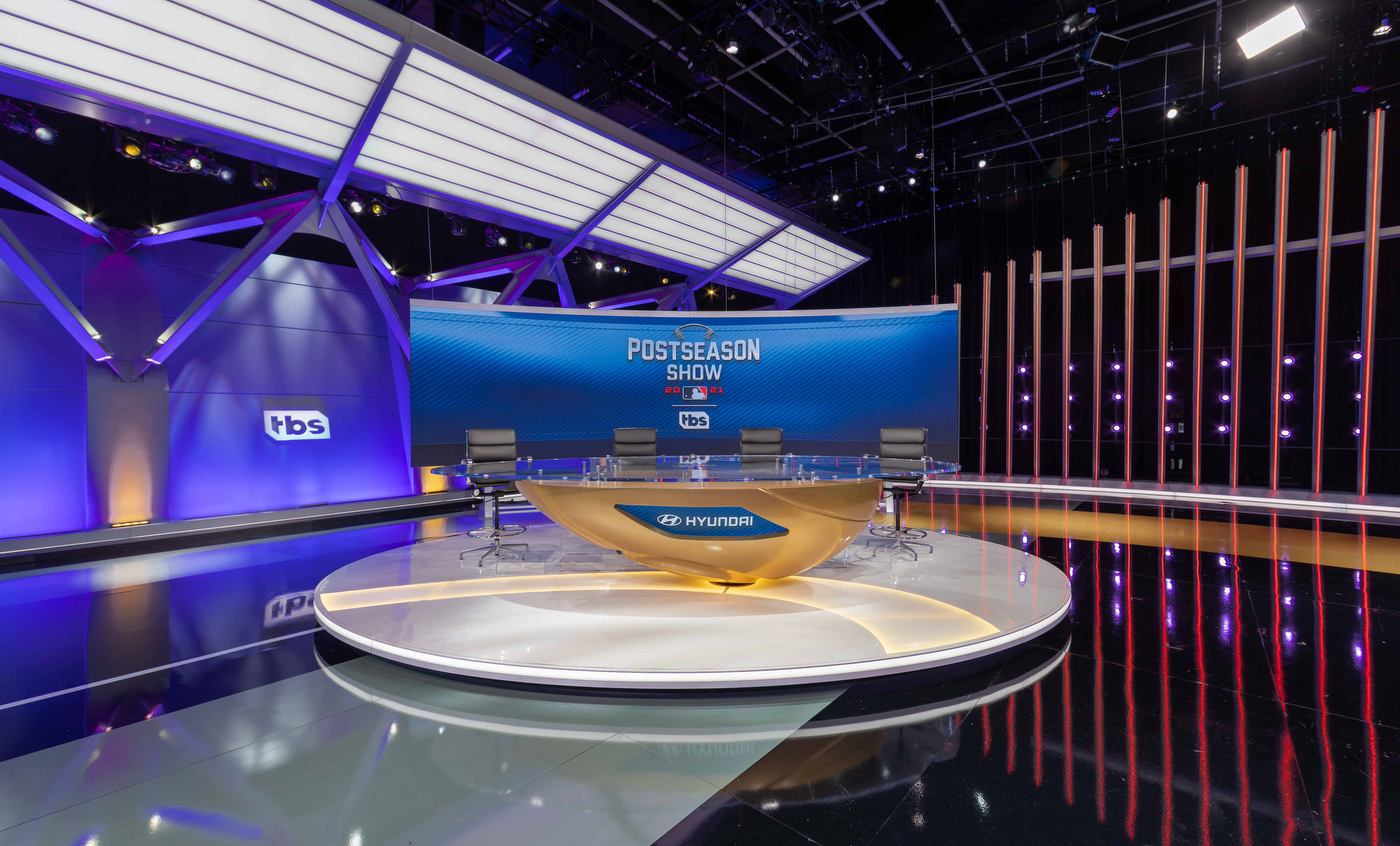 For its “MLB on TBS” studio shows, Turner Sports transformed Studio D at its Atlanta facility into a dramatic and sleek interpretation of a baseball diamond.

Whereas the network’s MLB coverage previously originated from the smaller Studio F with a more literal interpretation of a baseball stadium, Clickspring Design crafted a design that gives programming a standout look that’s full of dynamic storytelling opportunities.

TBS was looking for a way to make its studio shows distinct from other sports broadcasters’ looks — and to allow for the interplay between host demos and augmented reality lineups and graphics.

The basic footprint of the studio features “home plate” in the southwest corner of the studio, which is almost square in shape. This is denoted by floor decals and backed with a green screen that lets TBS insert a variety of graphics.

With this as home base, the Clickspring team positioned the “pitching mound” on the opposite side of the space, situated in front of another freestanding chroma key wall that’s framed by an array of strong vertical elements forming a canopy over the space and stretching from roughly where first and third bases would be. 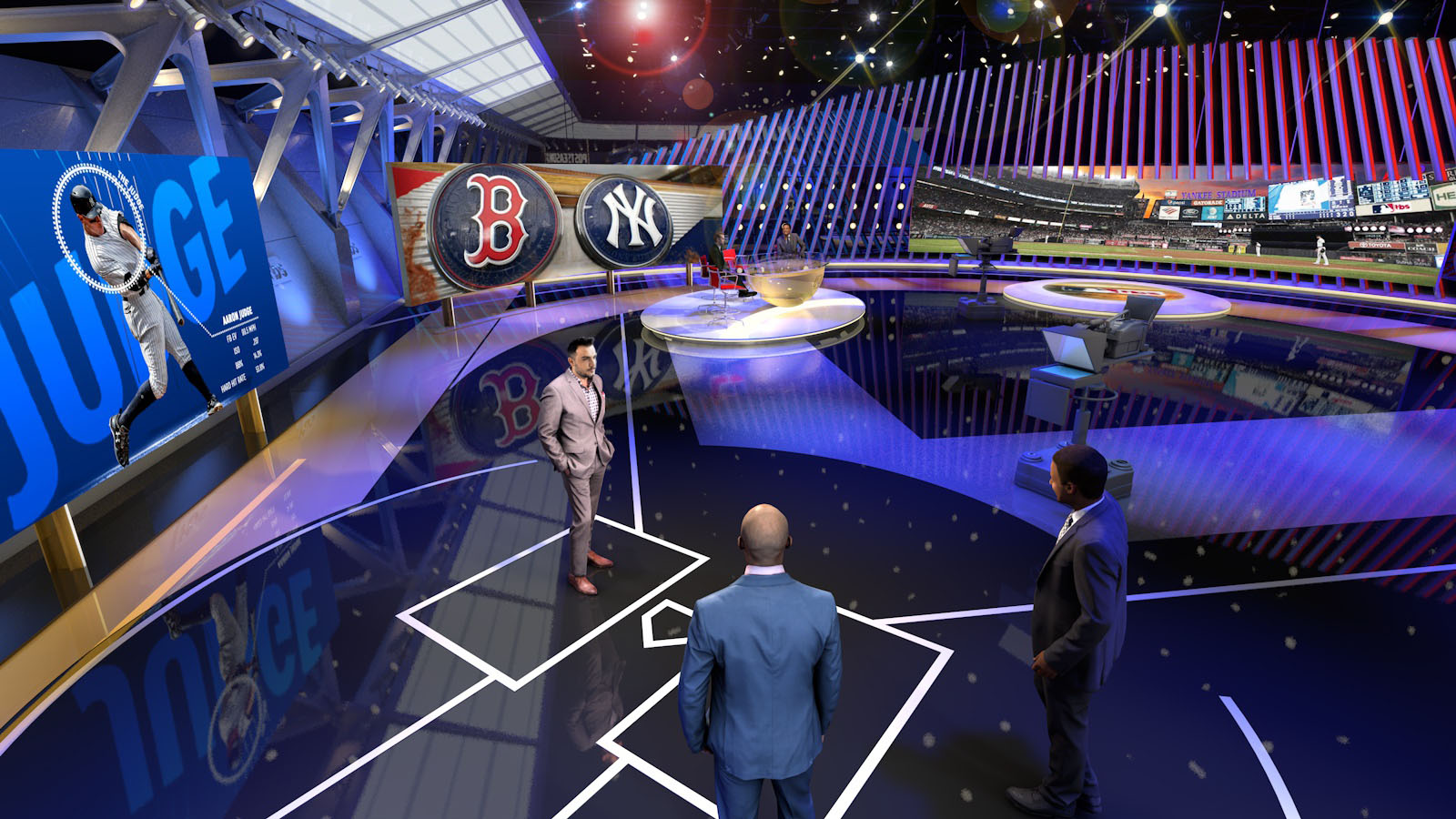 Design concept rendering of the “MLB on TBS” studio. Courtesy of Clickspring Design.

A lot of thought went into where to place the anchor desk, said Clickspring’s Emmett Aiello, chief creative officer. The team didn’t want to obscure home plate, the mound or second base, so the third base position was chosen since it’s midway between those to parts of the “field.”

“Once we determined this layout, it was an easy conceptual leap towards evoking a baseball stadium across the rest of the space, albeit in a non-literal way,” Aiello said. 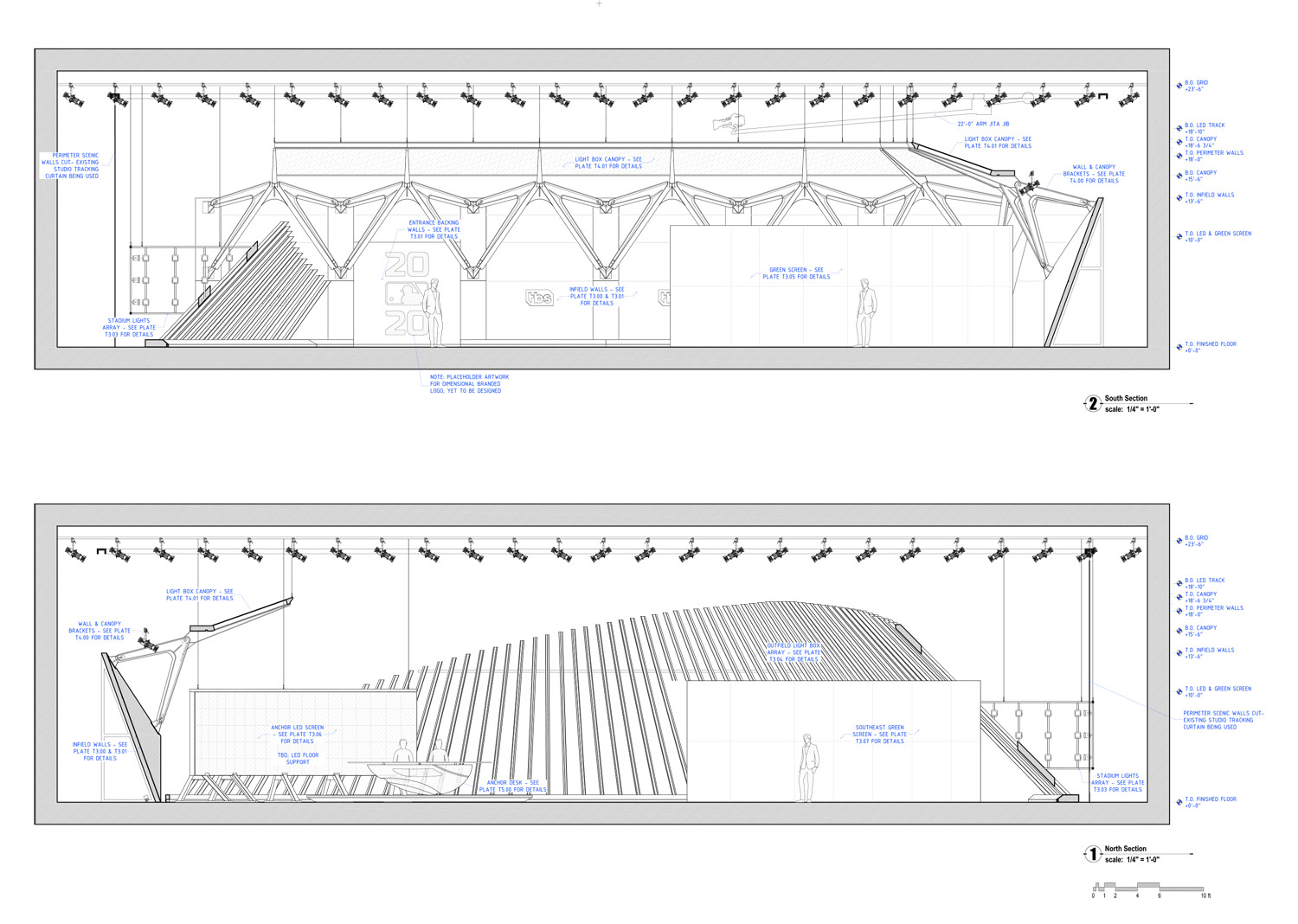 The team studied a variety of stadium architecture but was cautious about making the design overly nostalgic, representing a significant shift from its previous studio set.

Instead, the new look drew inspiration from the architectural details of the structure of modern stadiums, including a variety of four-pronged angular support buttresses mounted on a textural wraparound wall and holding up a backlit overhang.

These more structural, solid walls extend along the west and south side of the studio walls and include a working entryway in the southeast corner.

The impressive canopy that wraps around approximately half of the space was the result of careful design consideration and ideation. 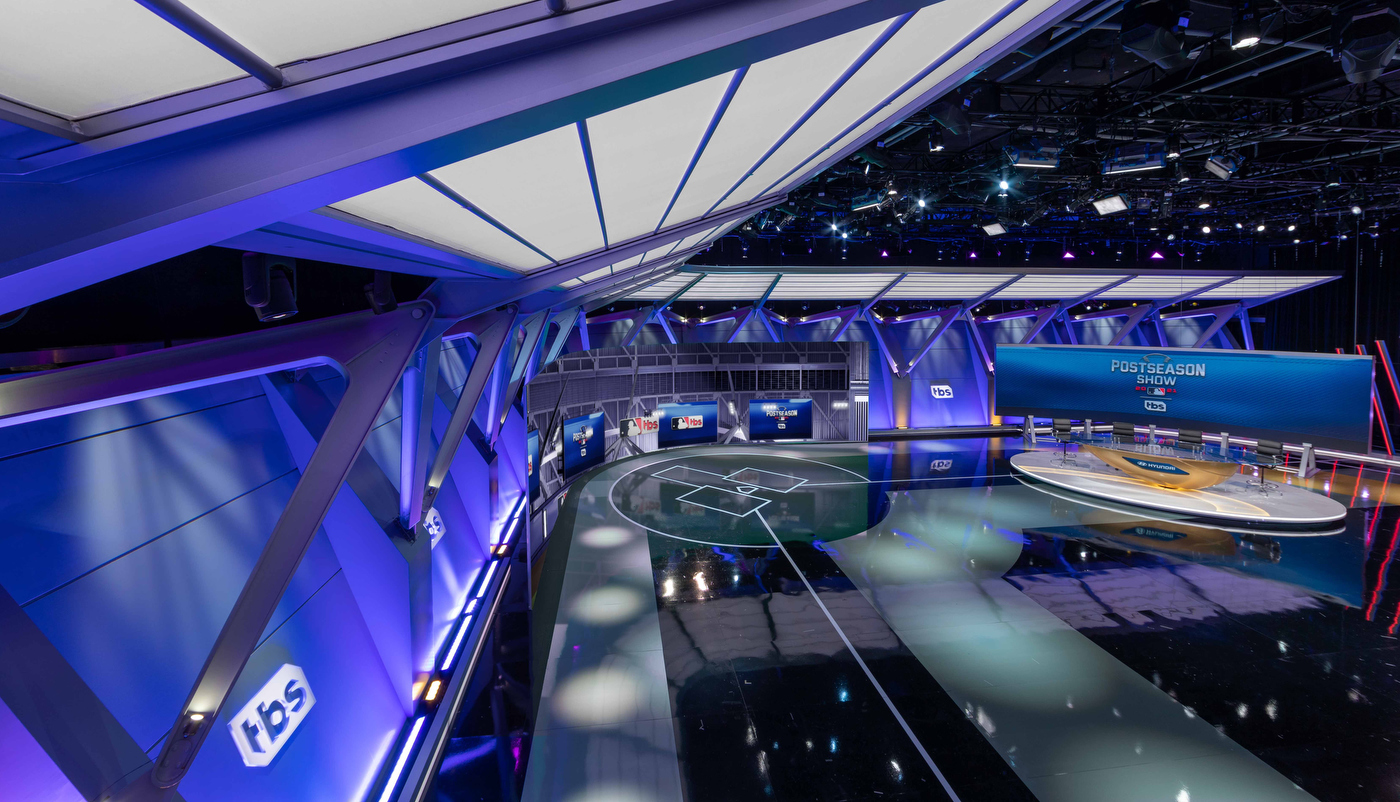 A view of Studio D from the ceiling overhang.

“Our goal was to design a perimeter wall language that was highly sculptural and would receive and emit light sources dramatically,” according to Aiello.

Clickspring worked closely with The Lighting Design Group’s Niel Galen to coordinate the LED inside each of the vertical pieces, which vary in length to form a gentle curve that reaches a pinnacle in the northeast corner of the studio.

“Although the walls, brackets and ceiling overhang are traditional scenic structures, the use of purposeful, structural forms gives the design more authenticity,” noted Aiello.

The main anchor desk is an internally lit bowl-shaped orb delicately balancing on a single point that emits a soft golden glow. 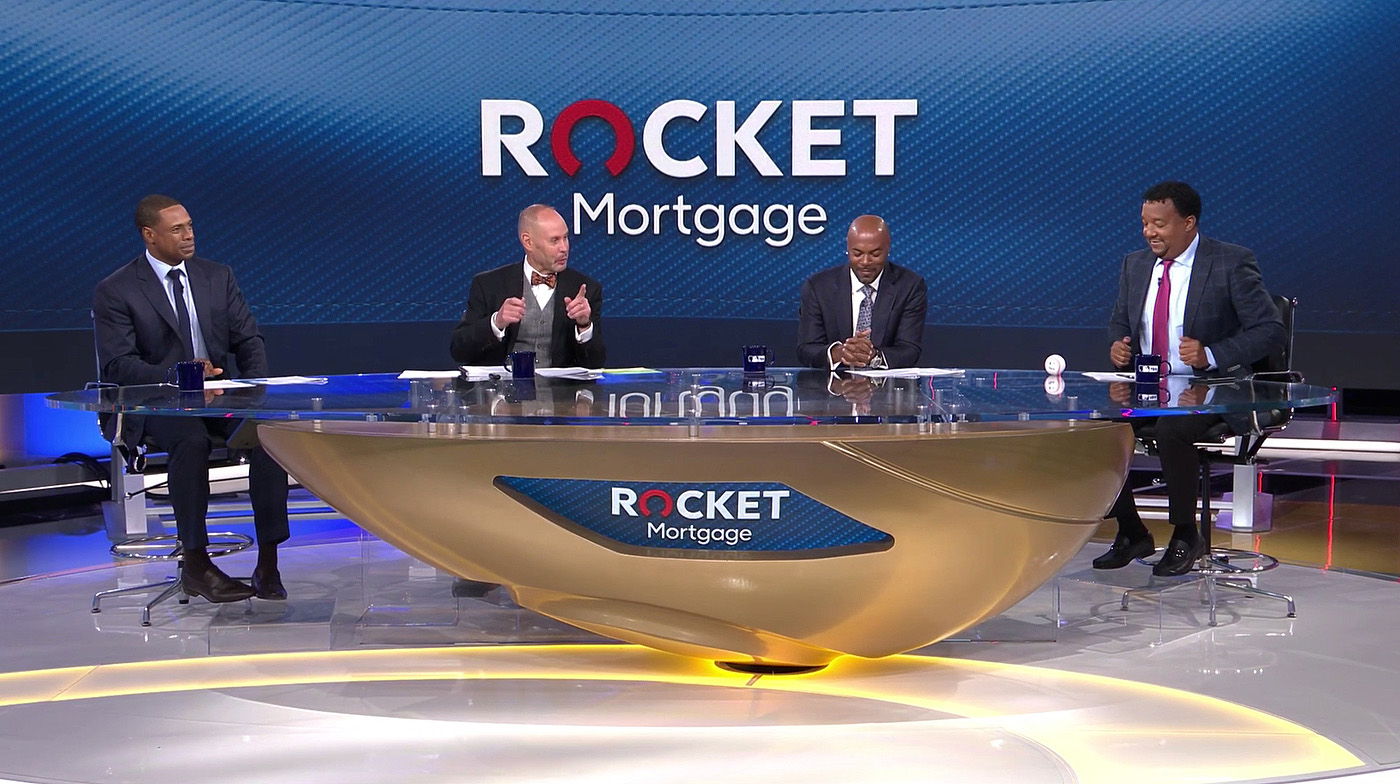 “We wanted the desk to be less a desk and more a sculpture with talent seated around it. We felt this would be unique to TBS’s broadcast among the many baseball shows out there,” said Aiello, noting that the team was drawn to the contrast between the angular architecture found elsewhere in the studio.

The shape is evocative of a baseball — but not too much so. 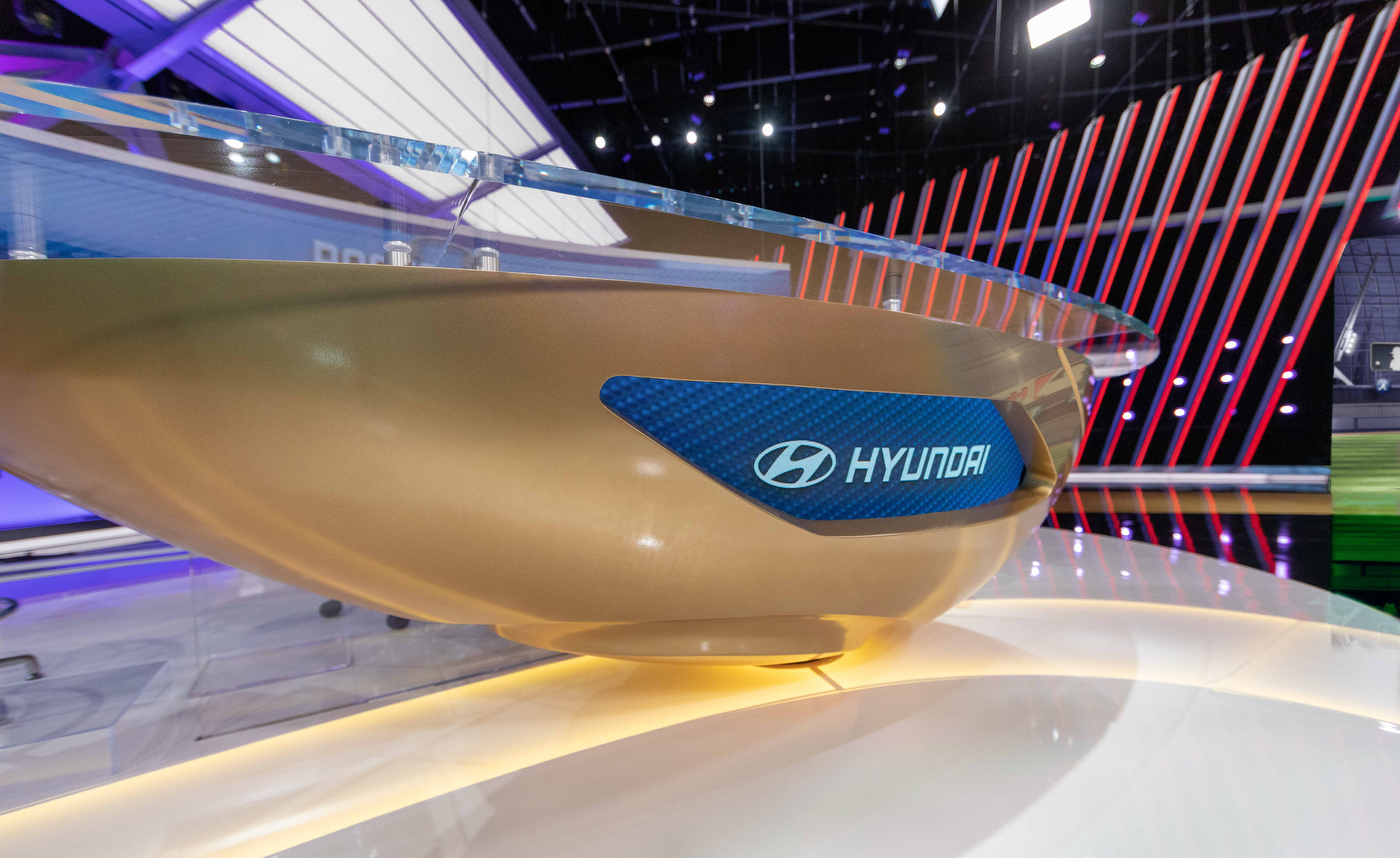 “We didn’t want to get too literal with this so the gold materiality was a nice way to break free while referencing the materiality of the World Series trophy awaiting the winning team after the postseason,” Aiello explained.

The desk was an engineering feat in itself, and fabricator Dimensional Worldwide worked closely with the designer on multiple rounds of drawings to determine how the piece would be built and, ultimately, be able to support itself.

“This was not an easy piece to build and it was executed beautifully,” said Aiello.

Behind the anchor desk is, despite all appearances, the only actual LED video wall on the set — and it’s used as a way to showcase individual show and team branding as well as rotating between TBS and sponsor logos.

Originally the design called for the areas behind home base and the center of the canopy to be seamless LED video walls. However, these were ultimately swapped out for something decidedly lower-tech that ultimately gave the productions an even more dynamic feel. 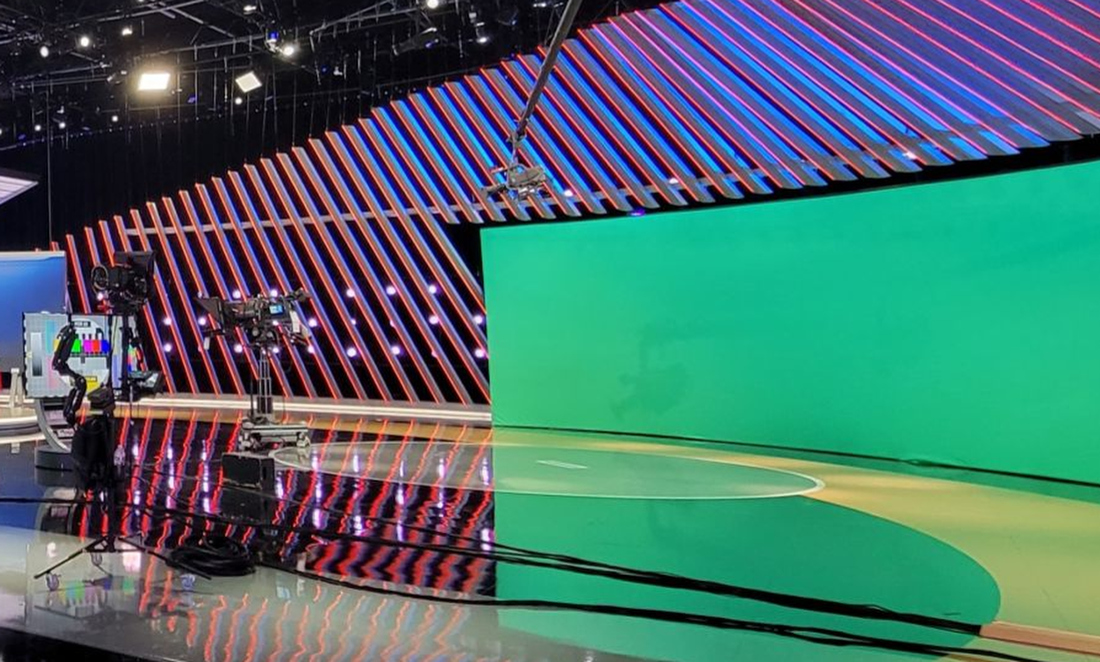 Example of a chromakey wall inside Studio D. 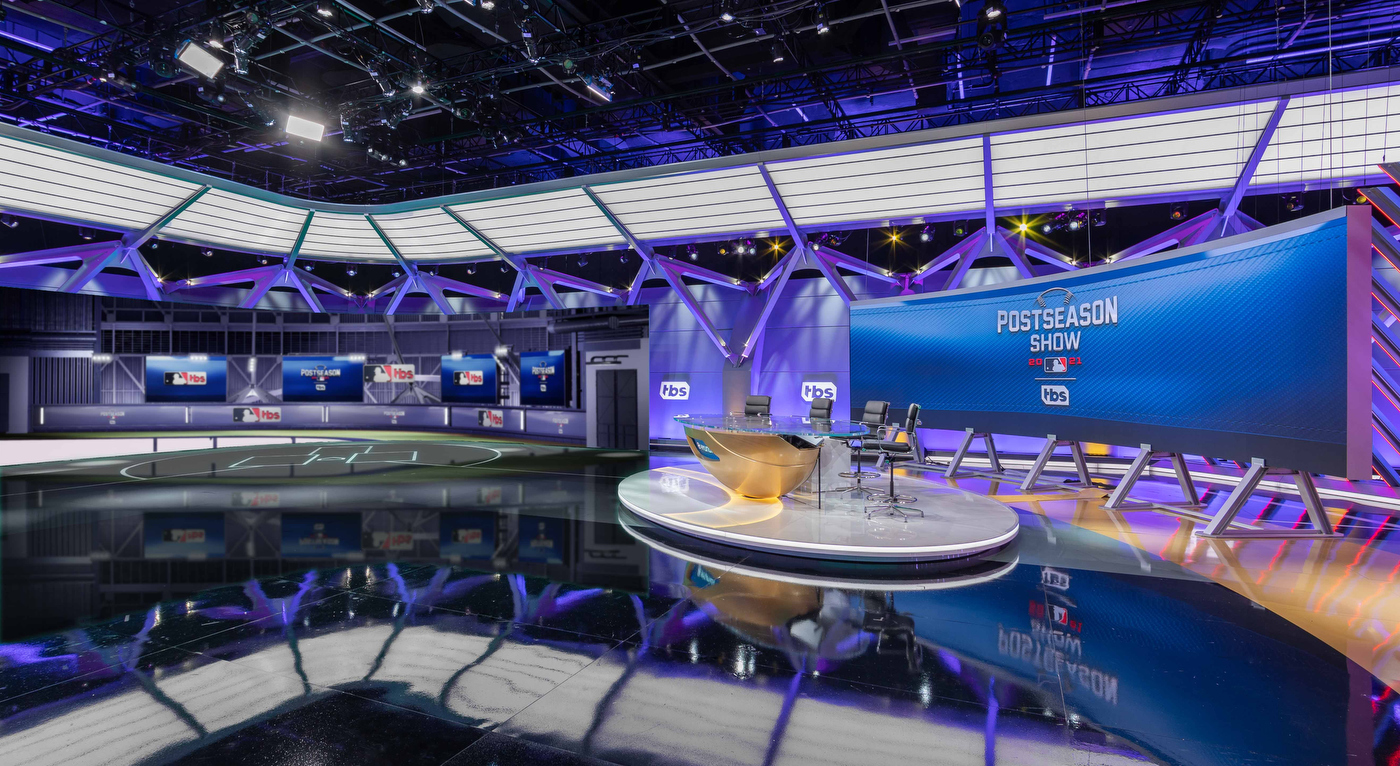 The anchor desk and one of the virtual set extensions with a stadium scene.

“We just felt like the LEDs would have been great, but we really didn’t think that that was the next evolution for us,” said Steve Fiorello, VP, coordinating director, Turner Sports.

After extensive pre-production and design work, Turner created a variety of 3D environments and backgrounds that could replace, in real-time, the bright green key walls.

This approach was directly tied into the augmented reality and camera tracking systems to allow for seamless coordination between all of the elements. The on-air look features parallax-style effects that coordinate with the camera viewport, creating the sense that there’s an additional layer beyond and making the space feel larger.

Careful attention was paid to avoid any green reflections on the various studio surfaces, and the graphics systems can also intelligently insert reflections on the studio floor as if the green screens are a sort of souped-up version of an LED video wall.

Six cameras, including four pedestals, a Steadicam, and a ceiling-mounted Jitacam are present in the studio, with Mo-Sys for camera tracking. 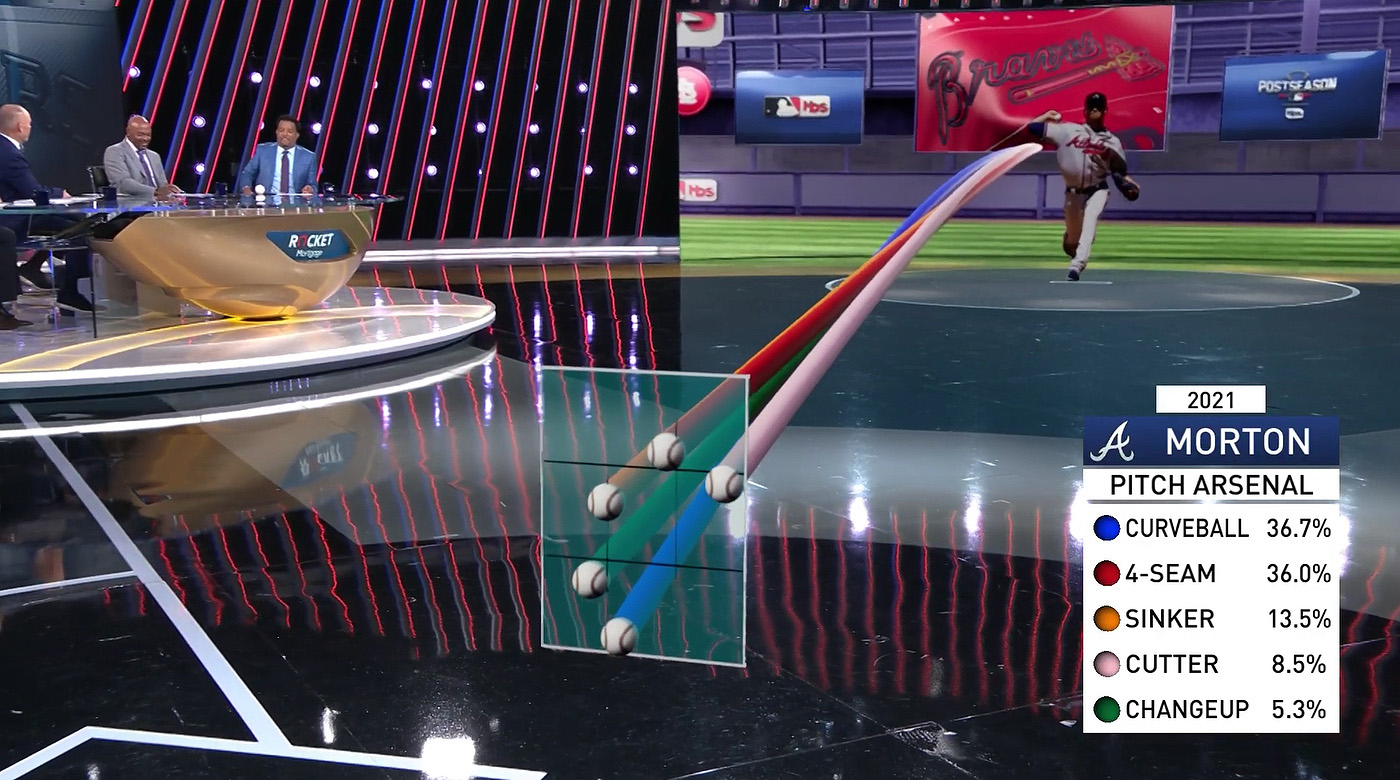 The pitching AR relies on data gathered by SMT with a variety of tracking devices, cameras and sensors installed in the bullpen and imagines each of them as a different colored “pipe” that shows the path the ball ultimately took. Appropriately, this is done in the “home base” area of the studio and designed to look as if it is originating from the pitching mound. 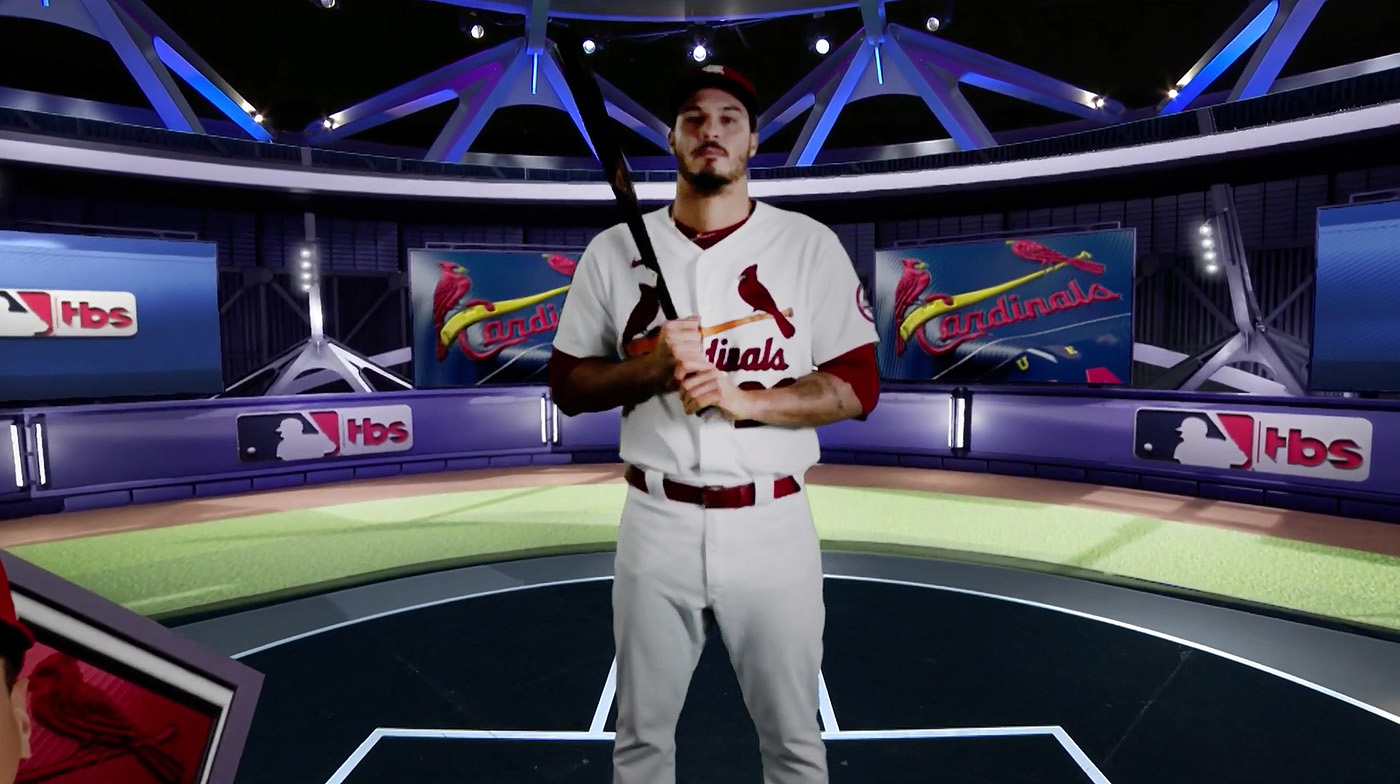 Meanwhile, players can be represented in one of two ways — with more traditional headshots framed by pentagon shapes or what TBS calls “walkouts” that feature full body shots of players, filmed against green screen and matted so that a virtual version of the player appears to walk across the studio floor.

Coordinating that with MLB was a logistical challenge, but the network managed to capture shots from every team in the league, and the players themselves were excited to take part and see the final result. 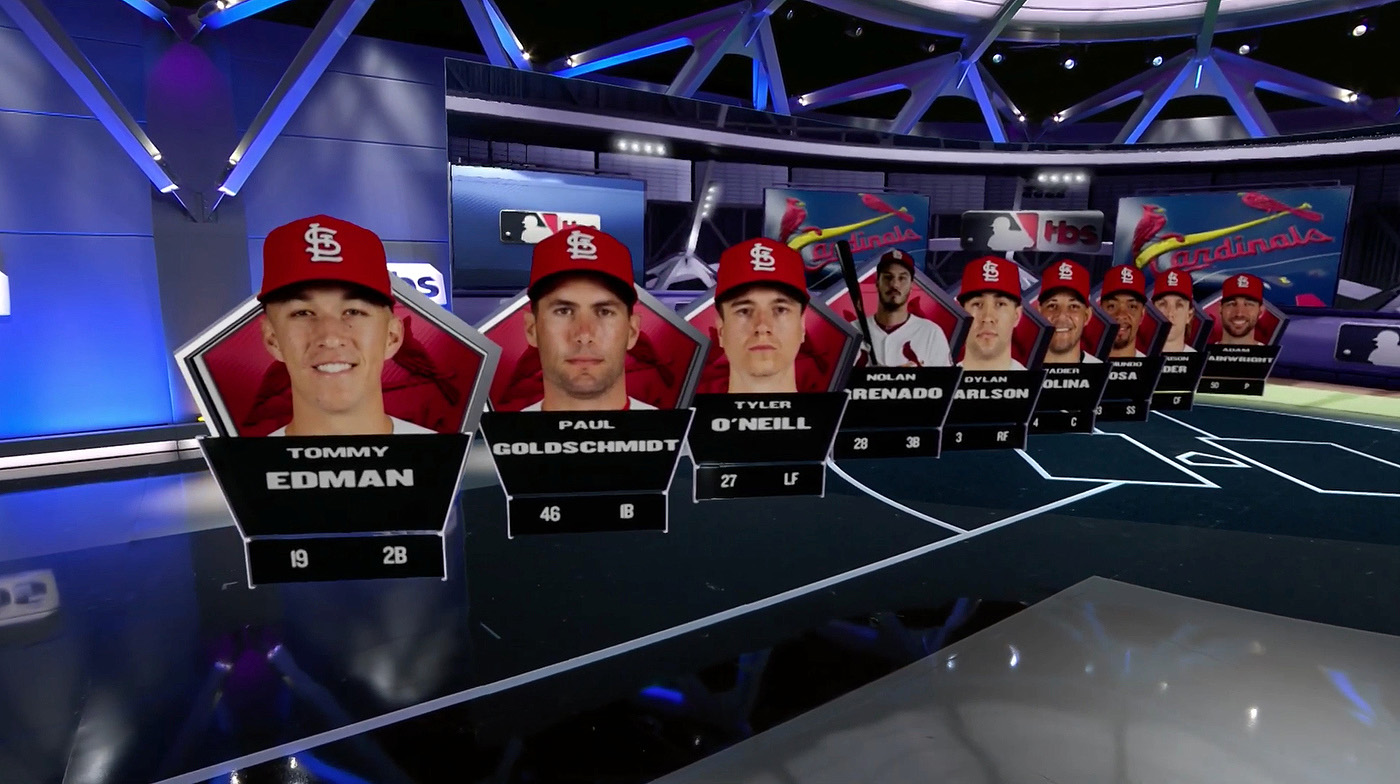 This is just the tip of what’s possible, however, Fiorello notes.

Much of the work was left “on the cutting room floor” — at least for now — and once preseason and regular season play start up, viewers can expect to see even more innovative ways to illustrate the mechanics and strategy of the sport.

For example, TBS has plans that will let hosts demonstrate their knowledge of the sport live but supplemented with simulated AR elements. Some of the hosts are already itching to try it out, but the network is using the postseason time to break things in slowly and only introduce new on-screen elements when it feels comfortable doing so — a wise move considering most of it is done live.

Meanwhile, fullscreen and bumper graphics, which are also incorporated onto the real and faux video walls, drop the “weathered” look used in seasons past but still focus heavily on texture — just in a sharper, more defined way.