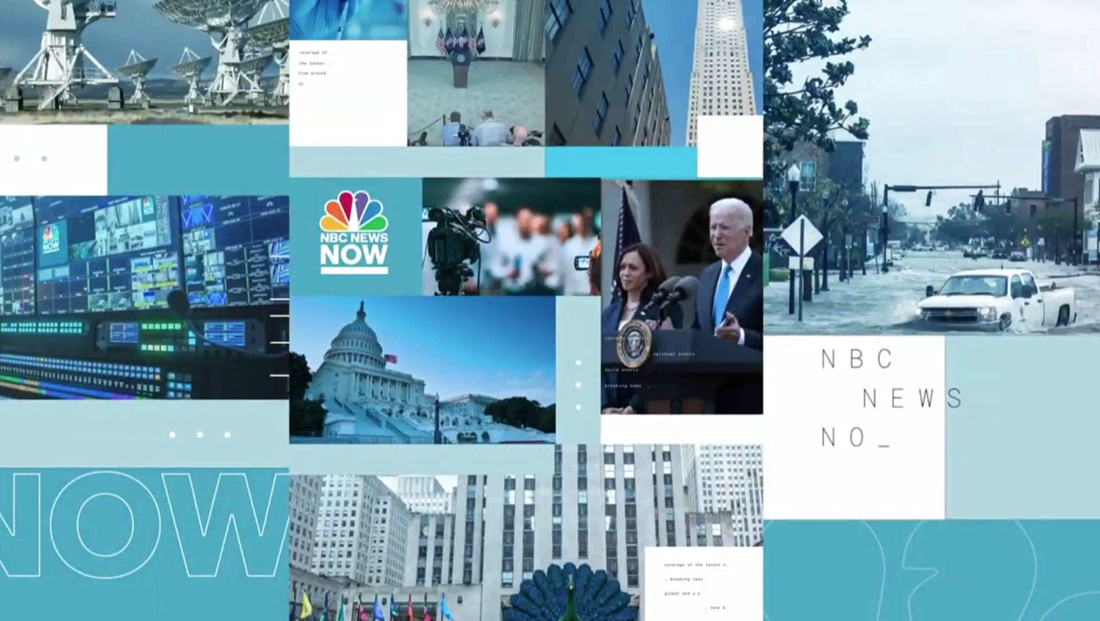 A new logo and bug started popping up on screens over the past few months.

The next day, “NBC News Now Live with Aaron Gilchrist and Morgan Radford” switched to using the new graphics at 10 a.m. eastern, but “Morning News Now,” which airs immediately proceeding that, stuck with the old graphics and logo.

Finally, on Friday, Nov. 19, 2021, “Morning News Now,” which was one of the OTT service’s first multi-hour anchored shows, made the change to the new graphics as well.

The look is nearly identical to the ones introduced for “Live” blocks the previous day, except that the color palette has been shifted to be a bit lighter, with white now one of the triad of colors (along with two lighter shades of blue) used in opens and fullscreens.

The show also uses the updated music, with a softer option used under teases heading into a break.

It’s worth noting that, unlike he other anchored blocks of NBC News Now, the “Morning News Now” open puts less emphasis on talent photos, instead using imagery of control rooms, broadcast equipment and imagery of Rockefeller Center, including photos from the day NBCUniversal erected a large peacock “topiary” for an investor event in 2020 touting the launch of its streaming platform Peacock.

NBC News Now is one of the “channels” available on Peacock.

Meanwhile, “Top Story with Tom Llamas,” NBC News Now’s signature evening newscast did not make the switch to the new graphics on its Thursday, Nov. 18 edition, which was anchored from Kenosha, Wisconsin.

The show has used a distinct look since its debut that was a major departure from the look used on other shows.

A source told NewscastStudio that “Top Story” will continue to have its own look. Joshua Johnson’s forthcoming and yet to be named analysis and explainer show will also have a unique look, according to the source.

In some ways, “Top Story” has elements that hint at the new look for NBC News Now, including the use of the underscore after the show’s title (as in “Top Story_”). Some of the animation used also ties into the channel’s broader look.

As one of the highest profile shows in terms of anchor and timeslot, it’s also possible NBC News Now wants to keep a distinct look for it.

“Top Story” was the first show to use what would become the channel’s new logo. It also introduced a new bug that was eventually tweaked a bit Nov. 10, 2021.