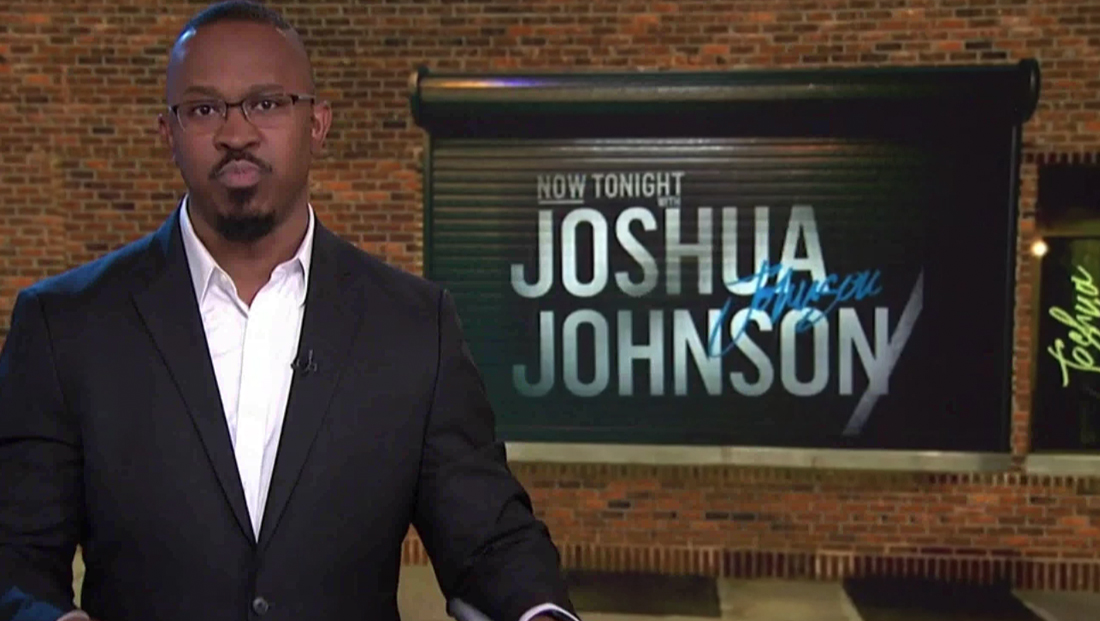 Streamer NBC News Now debuted another hour of original, anchored programming with “Now Tonight with Joshua Johnson” — a show that has a different look and feel compared to a typical newscast — and that was all done on purpose, according to the host.

Johnson noted that the production team behind “Now Tonight” had spent “months” working on how the show would look and ultimately landed on a combination of typographic heavy animation, a crumpled paper effect and primary background of a city street corner.

The show originates from one portion of Studio 6E, also known as the network’s Global Media Insert Studios.

In addition to the so-called “news nooks,” the space also includes a more full-scale set that’s been used for a variety of productions and is now also home to “Morning News Now” on the NBC News streaming service. 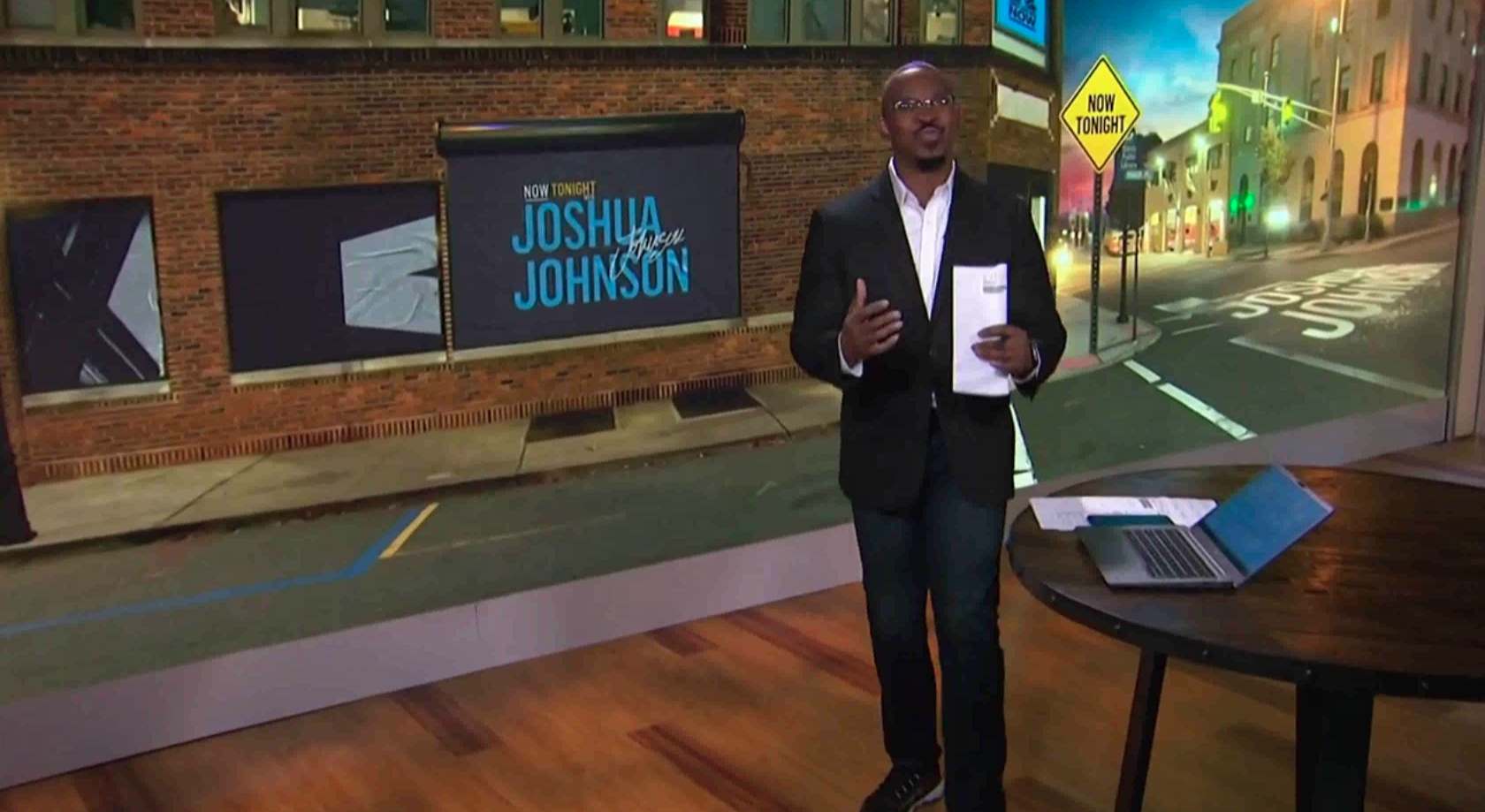 For his new show, Johnson stands almost the entire time at a circular, reclaimed wood table with a glossy but scraped top, which also serves as a home base for his laptop. The table comes from West End Salvage which has served as a broadcast venue and provided wood elements for NBC’s primary election coverage.

Behind Johnson, LED video walls showcase a digital version of a street corner, complete with a traffic signal that can change color and street signs.

The background has been modified to feature the words “Now Tonight” on a yellow diamond sign. Portions of Johnson’s name also appear on the pavement where the word “Stop” typically would be painted.

An NBC source says that the background does not depict a real-life place, though it is inspired by multiple locales, with the design aimed at being an “all American street corner.” The signage, including the “Harris Public Library” sign and street sign do not depict actual places.

All of these elements sit off to the camera right side of the graphic, with additional buildings shown farther right.

Johnson stands primarily in front of the side of a building that features a “roll up” opening that’s used to showcase the date, his show name and topical graphics, which typically “roll down” from the top.

Other “windows” along the side of the building can also be filled with other generic or related graphics, similar to how MSNBC uses virtual set extensions with multiple opportunities for branded or topical graphics. 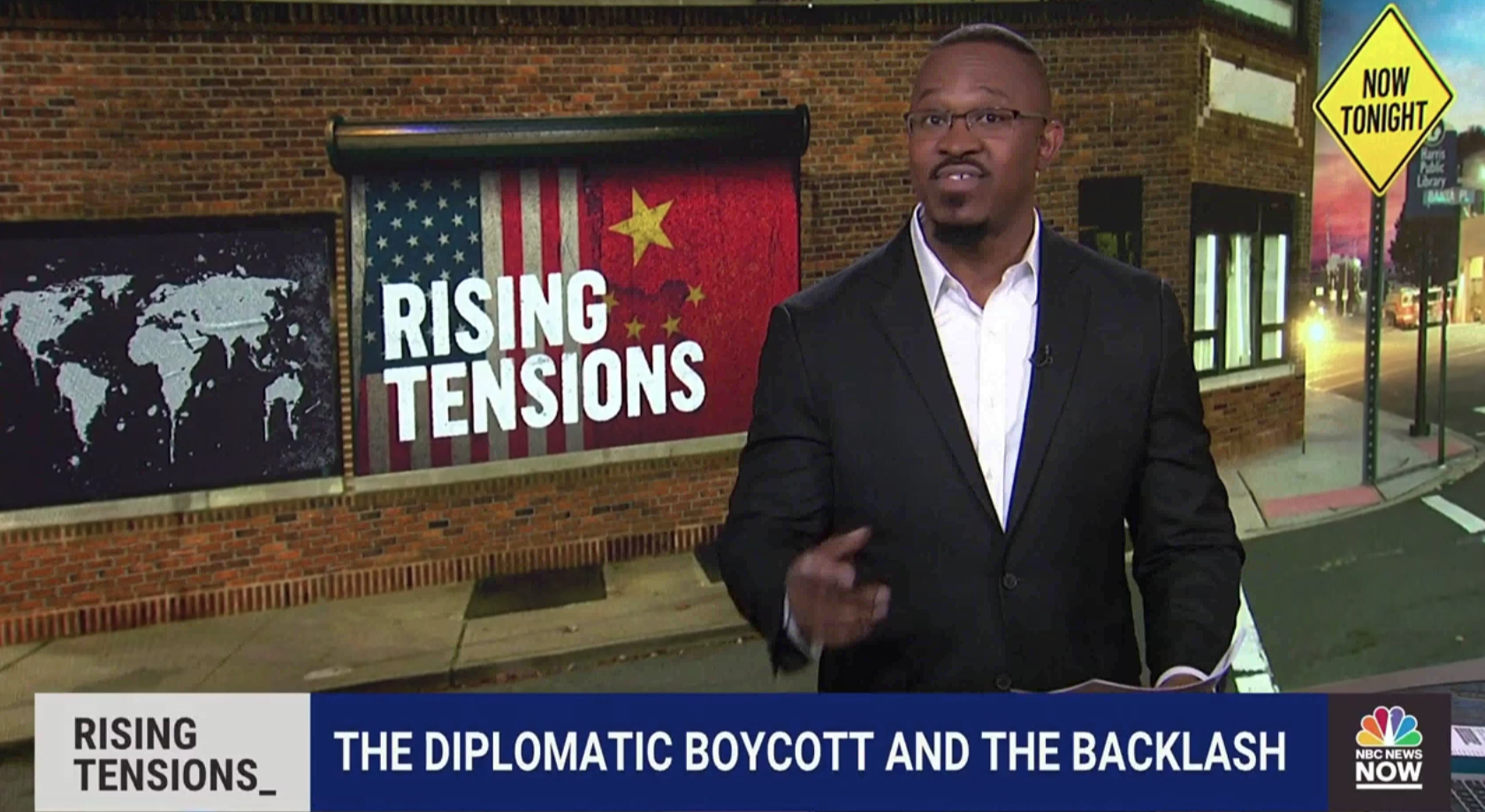 Depending on the segment and whether Johnson is framed camera left or camera right, the exact placement of the openings and graphics varies slightly to best accommodate his position. 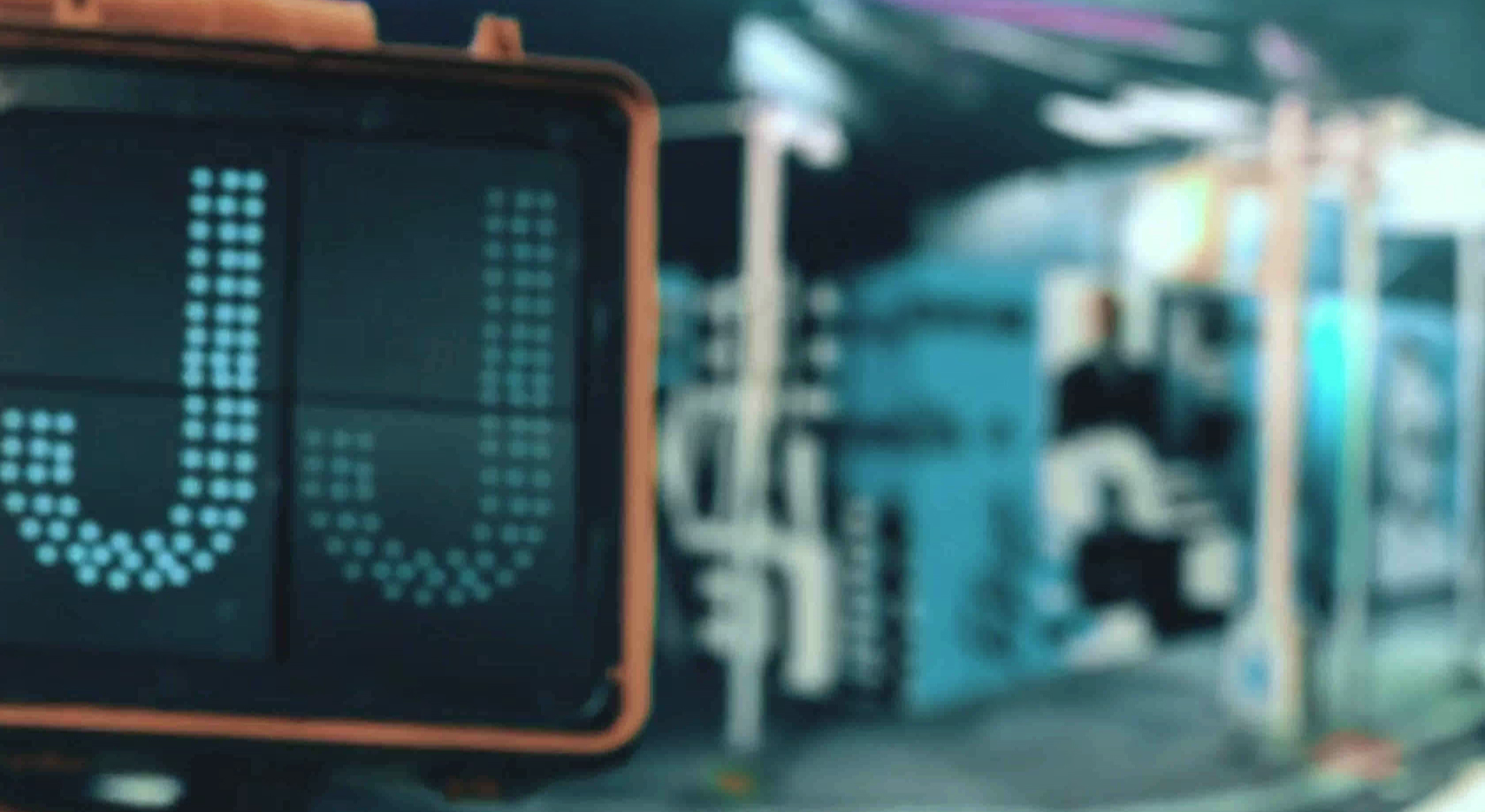 The open also contains numerous references to street signs, including a walk signal with the initials “JJ” as well as a sign for the presumably fictional “Connection Way.” These scenes are interspersed with a variety of animated typography set against additional imagery and texted backgrounds.

Most of the text used references the show’s name and key concepts that it aims to cover and similar looks are used in animated wipes and bumps. 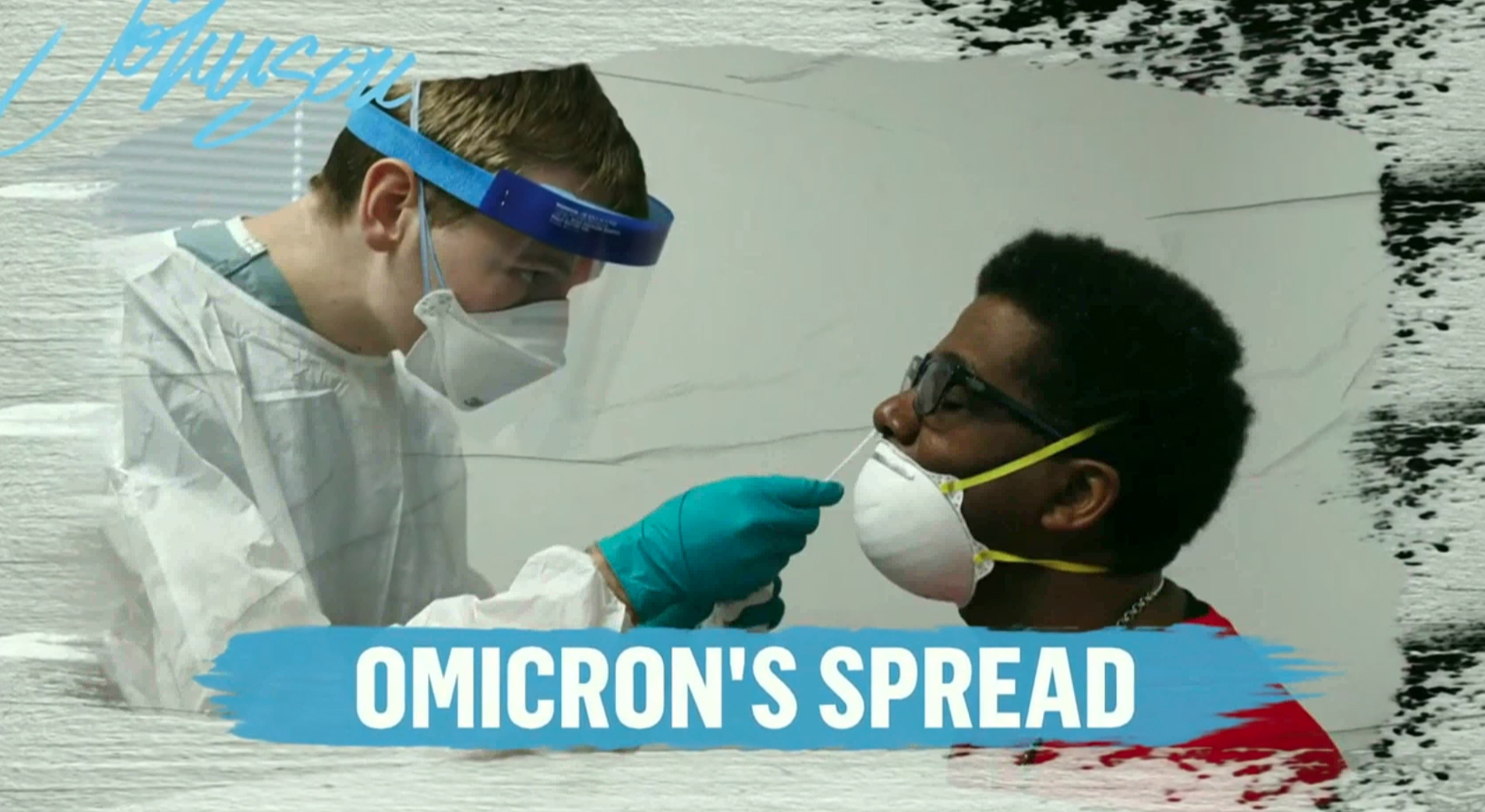 Tease graphics include plenty of texture and a slight ‘jump’ animation. They also alternate between dark and light color palettes.

The tease graphics have an effect that causes the image to “jump” around the screen by a few pixels every few seconds.

The show uses the same lower-thirds first introduced during “Hallie Jackson Now,” including the use of the underscore as an accent at the end of segment titles. That look later rolled out to most NBC News Now programming, including its morning newscast and rolling dayside coverage.

Johnson’s graphics are colored a blue-violet shade that’s taken from the open unless there’s breaking news, in which case they turn red.

During rejoins, shots of the LED “column” emblazoned with heavily typographical graphics were showcased and Johnson also introduced a taped interview using one of the set’s wall-mounted video panels while a floating “walk and wander” camera shot worked its way across the space’s largest video wall to showcase his guest’s various book covers and multimedia projects.

That interview, which featured the same street background, was taped in the vista wall alcove of the portion of Studio 3A that was previously home to “NBC Nightly News” and is now used across MSNBC and streaming content.

The larger, flexible part of Studio 6E Johnson uses has seen numerous updates over the years.

It has evolved from having sliding scenic panels to adjust the look to becoming stocked with an increasing amount of LED technology. Countless other changes have included bringing in decorative items, furniture and more permanent updates to the walls.

NBC updated the space significantly in 2020 ahead of debuting two editions of “E! News” based in New York and broadcasting from the studio. In March of that year, E! stopped in studio production due to the coronavirus pandemic and the shows were canceled in August 2020.