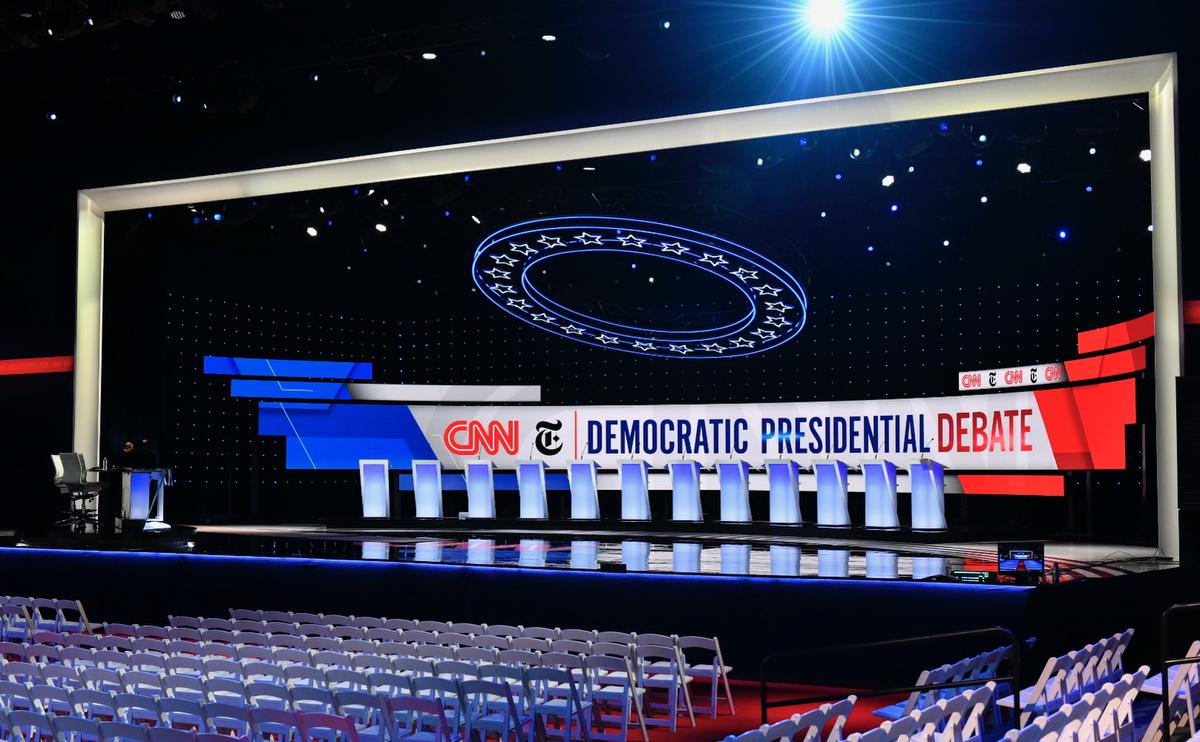 With another democratic primary debate in the books, this time from Drake University in Des Moines, Iowa, we dive deeper into the unique stage design backing the candidates on CNN.

The look, from Clickspring Design, was first used in the two night July debate at Fox Theatre in Detroit also appearing in October at Otterbein University in Westerville, Ohio.

We recently spoke to Christopher Ferguson, AIA, and Adrienne Kapalko of Clickspring Design about the staging and esthetic.

Christopher: It’s hard to ignore how the iconic environment particularly set off these first debates for CNN.

We can’t claim credit for it but it’s worth mentioning the stunning Art Deco masterpiece that is Detroit’s Fox Theatre. Both nights saw the space on full display, and its gleaming ornament and vaulting scale presented a nice foil for our comparatively minimal scenic design. 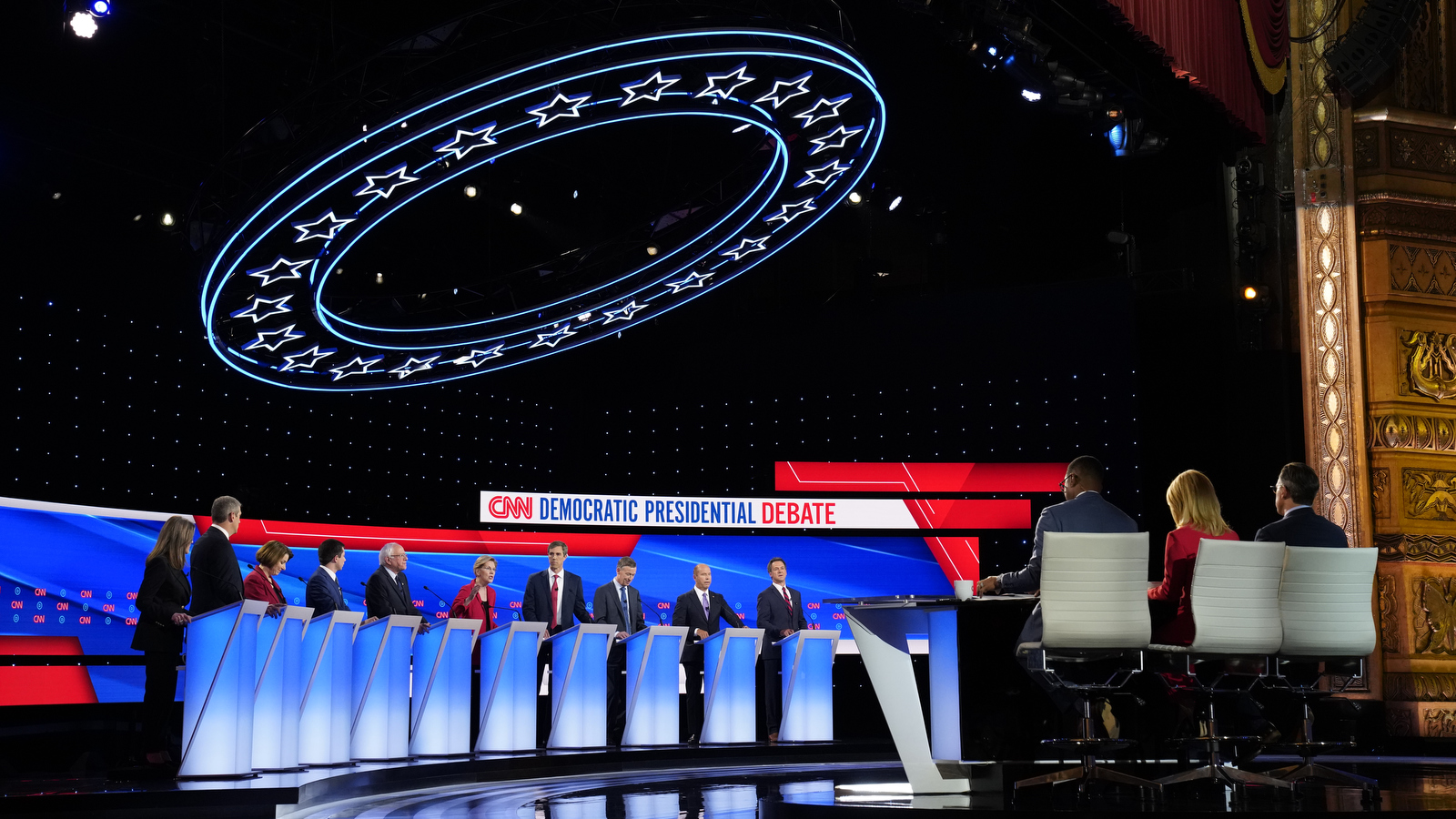 The debate stage design in Detroit at the Fox Theatre.

Scenically, we introduced an overhead element, which is an uncommon decision for debate sets that need to travel between a variety of venues with short installation windows. A circular, space frame truss is angled above the stage with a band of five-pointed stars circumscribed within two thin pinstripes.

The symbolism is a bit literal (not a bad thing when it comes to designing for politics), harkening back to designs for the earliest American flag. The result is a vertically expansive, cohesive look that fills the viewing field for both the camera and members of the audience. 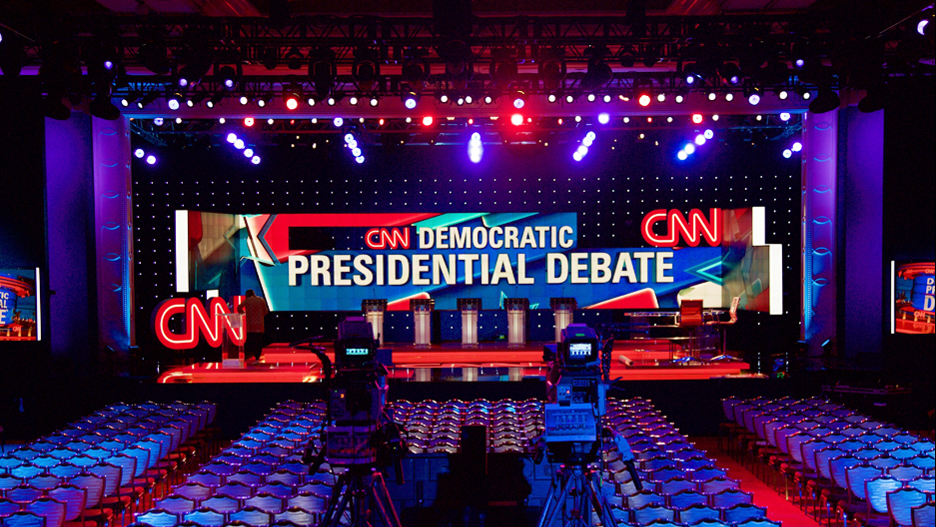 The stage design used by CNN during the 2016 election cycle.

How did you differentiate the design from previous CNN looks?

One of the biggest updates was the refresh of the candidate podiums. The previous podium design was used in multiple election cycles and employed a series of layered, clear acrylic fins to define its volume. This year offered the chance to take a different approach. 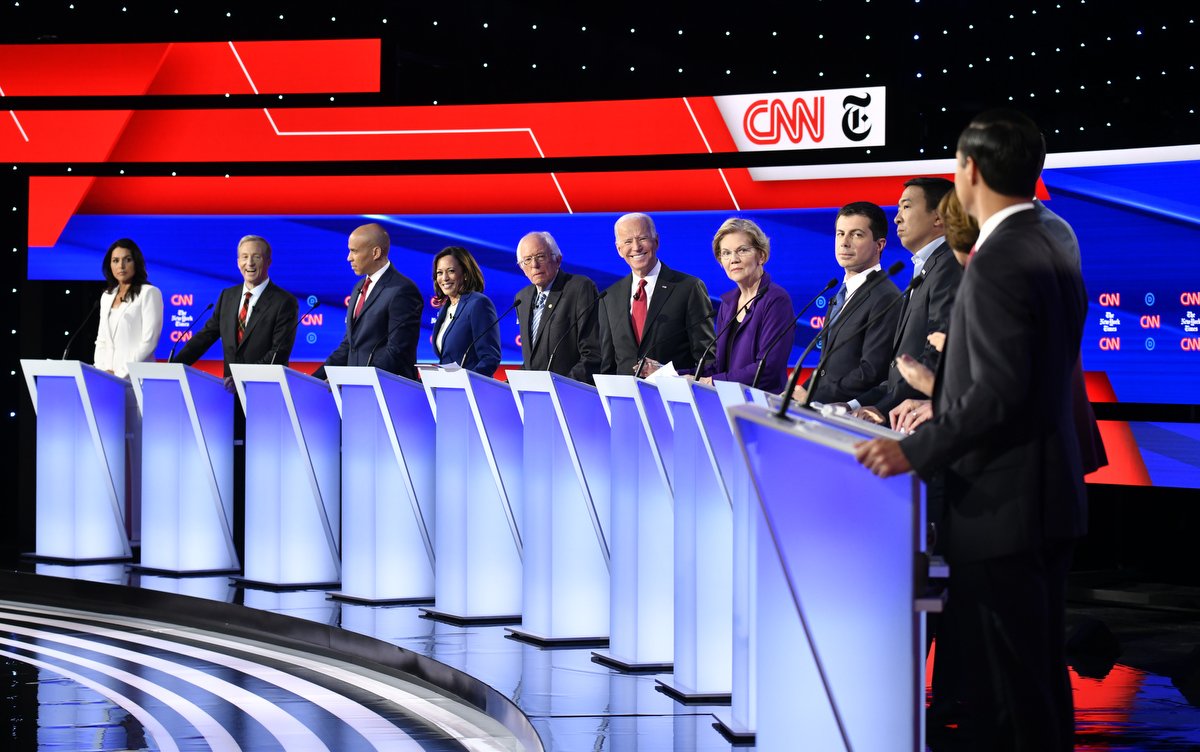 We pared down the geometry substantially to just two intersecting forms: a thick, rectangular extrusion that passes through a thinner, metallic blade. The thin component is angled downstage before folding back onto itself to become the podium’s lid. The inner rectangular volume is a shallow, frosted color scrolling lightbox that creates a seamless gradient from top to bottom.

The simplified forms are decidedly unfussy and lend a bold onstage presence.

How did LED display technology help drive the design?

Unlike traditional theatrical stage design, our scenery was engineered to be dynamic from the beginning.

If the stage needs to shrink, pieces can be removed from the middle to create a tighter radius. This also allows for greater flexibility in smaller venues. 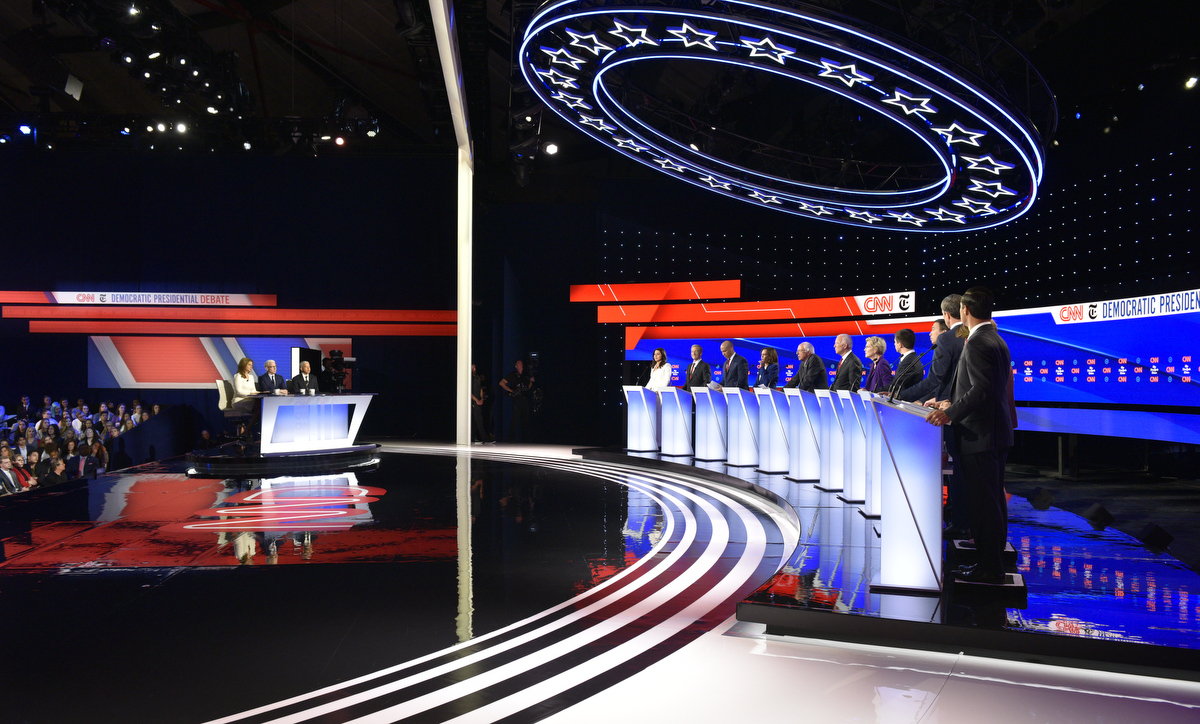 During this primary, in particular, we’ll witness an even more exaggerated winnowing due to the historic number of candidates. Fewer podiums will mean adjustments to podium positions, camera shots, moderator proximity, and a host of other production-related considerations that affect camera blocking and stage positions.

What constraints did the most recent debate at Drake University present?

Adrienne: The Sheslow Auditorium venue at Drake University has been used for television quite a bit over the years, but it’s substantially smaller than previous venues used by CNN in this cycle. 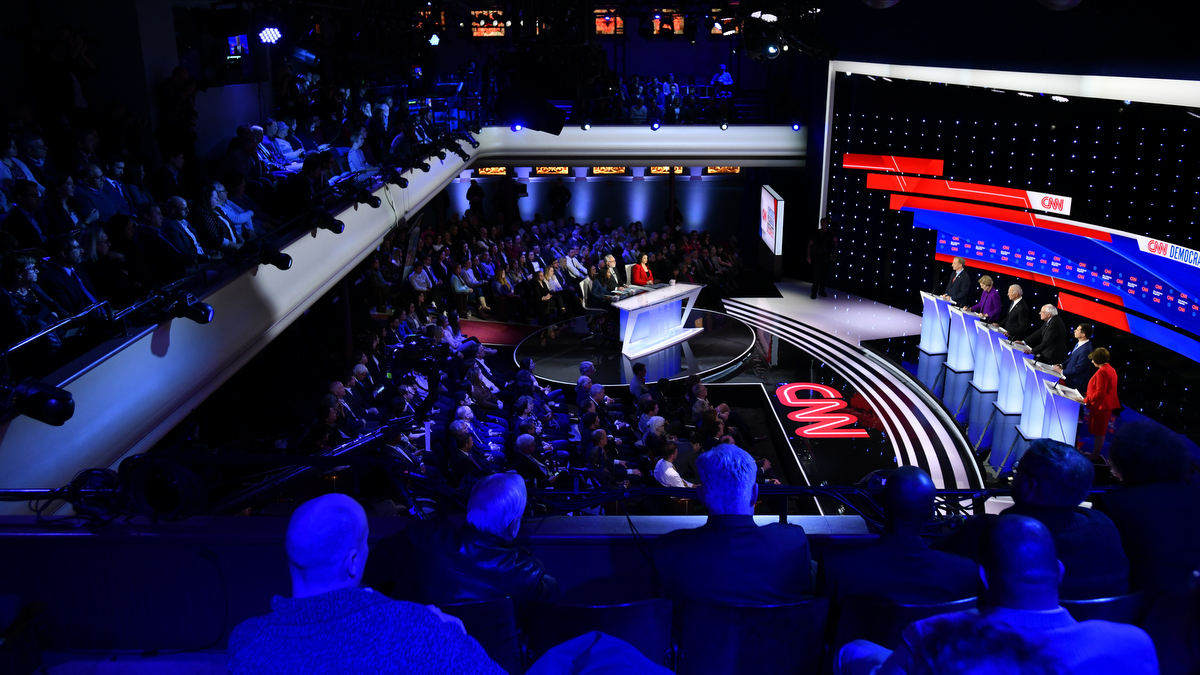 The debate stage at Sheslow Auditorium on the campus of Drake University.

The venue has two large curved stairs that flank the proscenium on either side of the stage. The challenge became to mask them while maintaining the signature look of the set design. The end result was a much-compressed stage layout, even after extending the apron by about four rows into the audience, a decision made to allow our LED and star backdrop to fall in front of the venue’s onstage staircases.

We also had the opportunity to get creative when it came to the rigging needed for scenic and lighting. In lieu of floor supported truss traditionally used in this space, the team was able to identify an attic space with structural beams directly above the stage and house. 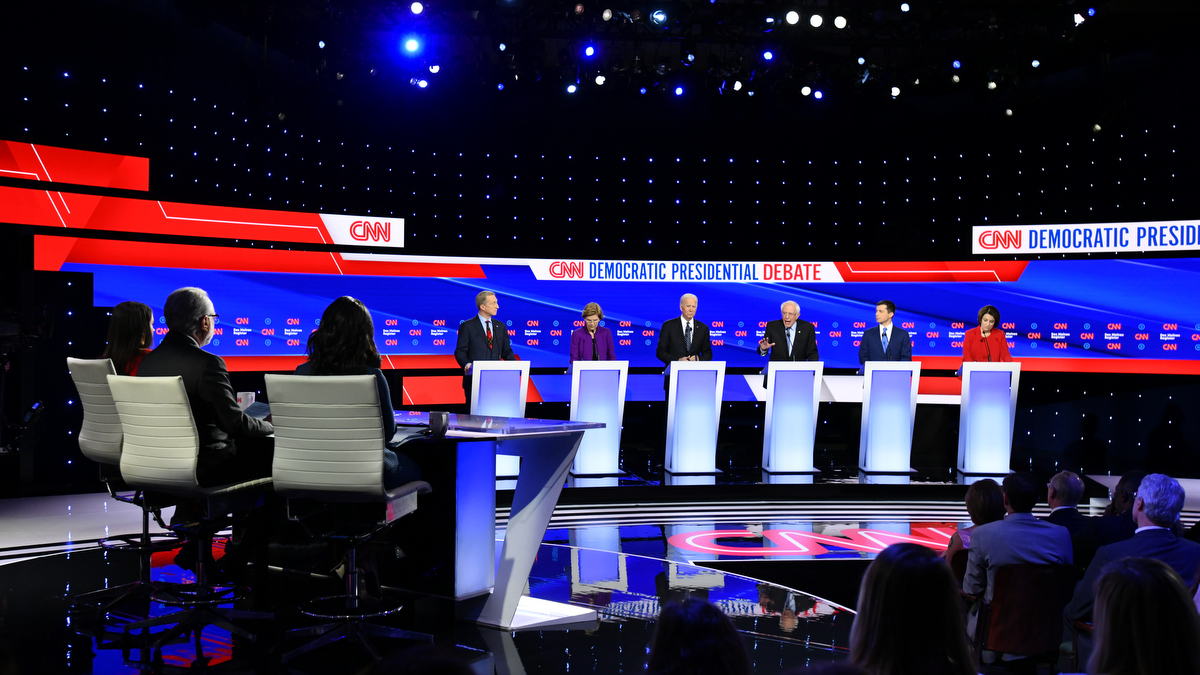 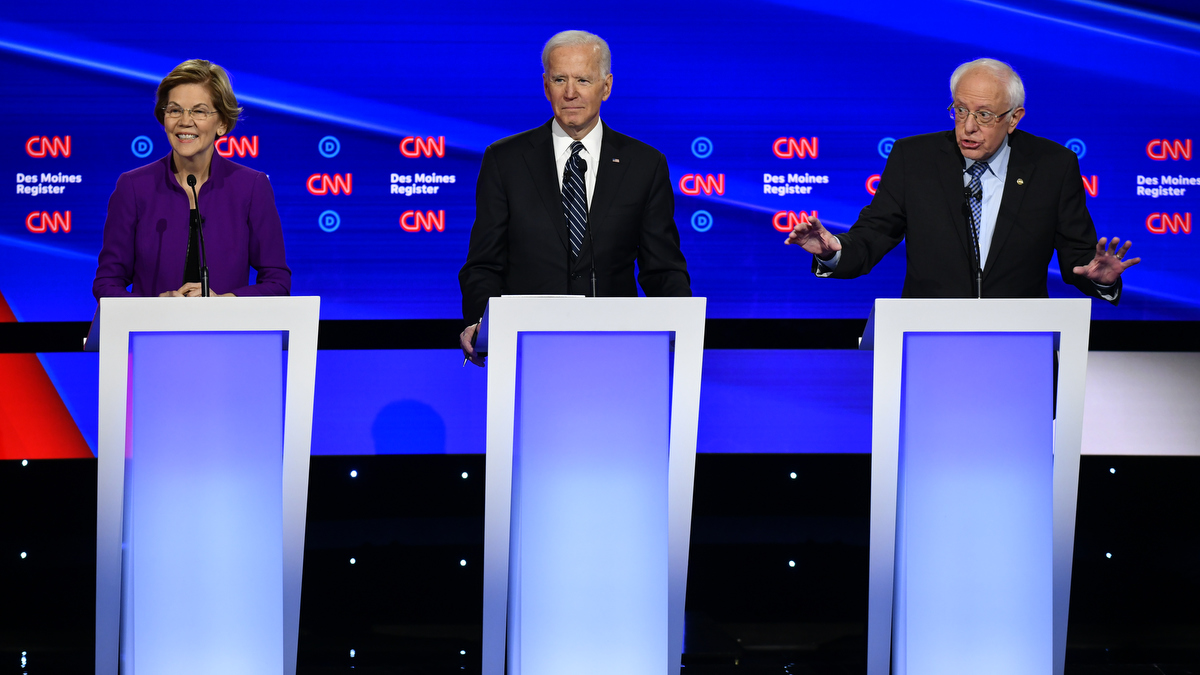 This was game-changing as it allowed the truss for the lighting and scenic elements to be suspended through the ceiling, strategically aligning the pick points with existing architectural house lights to avoid any damage to the auditorium. Identifying these structural beams in the attic made it possible to carry the load of the lights, let us maximize the audience by avoiding ground supported infrastructure, and allowed a much cleaner visual aesthetic in the smaller venue.

Any special considerations for the candidates?

Christopher: As you might expect there are prescribed standards for the podiums that affect their design. These are set by the Democratic National Committee and CNN. Most are mundane, like allowing functional space for water bottles and notepads.

Others are production-related, such as being hard-wired for microphones in such a way that doesn’t affect candidates’ supplemental mics that wear. These don’t necessarily affect the aesthetic, but they are important considerations nonetheless.

Design by Clickspring Design
Fabrication by PRG
AV integration and rental by PRG
Lighting by CNN’s Michelle Poley in Detroit, David Robinson in Ohio and Iowa