‘Today’ moves around as Studio 1A gets a ‘makeover’ 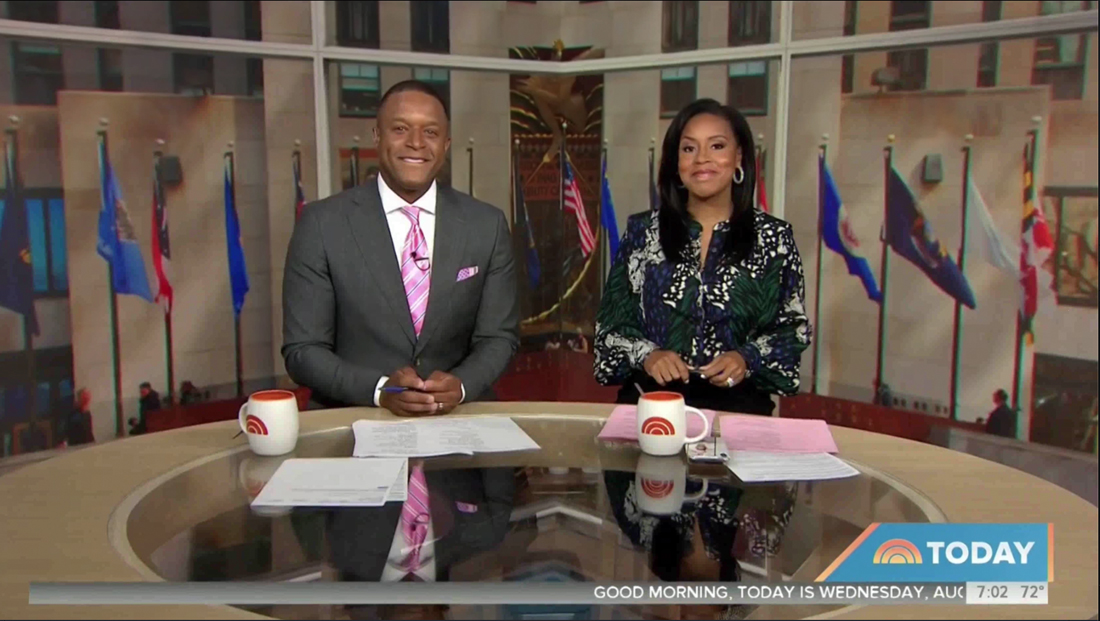 “Today” fans have had a confusing couple of days — with things looking a bit different on-air as the show makes some updates to Studio 1A.

With primary co-anchors Savannah Guthrie and Hoda Kotb both off starting Monday, Aug. 23, 2021, alternate but familiar faces have greeted viewers from behind the anchor desk, but that desk is a different spot.

The show has located its “home base” to the upper level of Studio 1A, sometimes referred to as the Satellite Production Area, or SPA, that includes space for “Today with Hoda and Jenna” and a kitchen set.

The show moved an oval anchor desk in the L-shaped video wall installation that was added to the space in January 2019 and used for an alternate location for the third hour of the show as well as standalone segments across the brand.

Guthrie anchored the show from her home studio, created during the coronavirus pandemic, Friday, Aug. 20, 2021, but Kotb was still at the show’s main anchor desk with windows overlooking Rockefeller Center behind her. 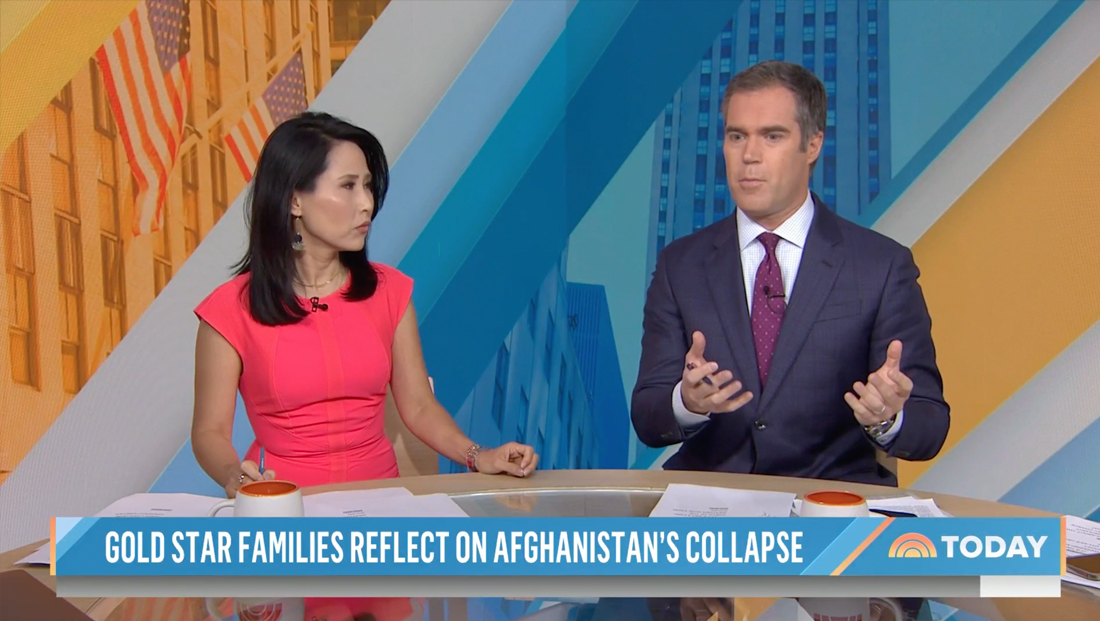 Saturday’s edition, which normally originates from Washington, was the first show to move upstairs, with Vicky Nguyen in for Kristen Welker and normal co-anchor Peter Alexander sitting in front of an angled graphic that matches the show’s new graphics package.

By Monday, Aug. 23, 2021, the background changed to a view of Rockefeller Center with faux mullions added to create the illusion of windows. A similar look has been used on the curved video wall installed downstairs in February 2018.

From the exterior “plaza cam” that shows the exterior of Studio 1A, coverings are visible on most of the windows on the lower level. 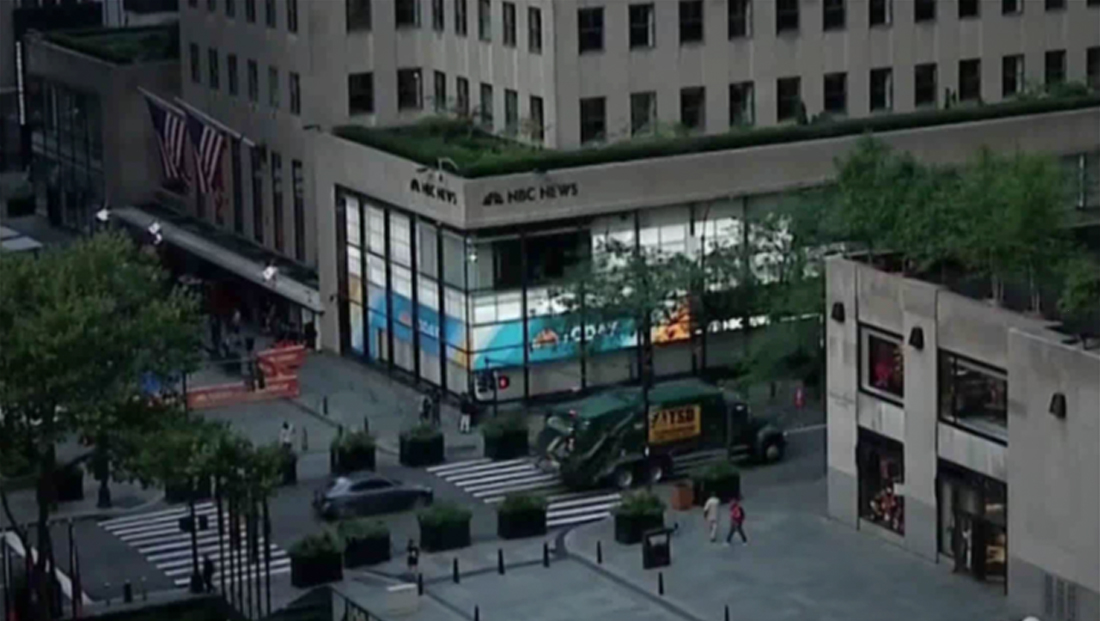 The alternate location anchors are using is located in the corner of the second level, roughly where the dark void is seen in the detail of the establishing shot shown here.

Meanwhile, as a temporary replacement for the “Happening Today” segment that typically starts the show, producers are using either fullscreen graphics or the vertically mounted video panels in the set originally created for “Today with Kathie Lee and Hoda.” 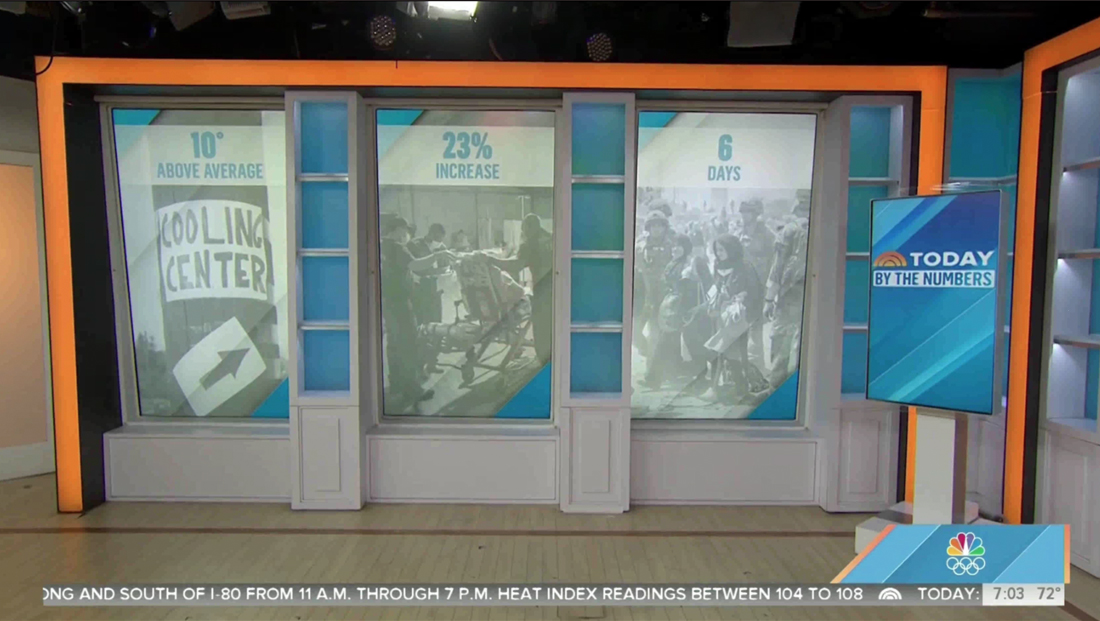 “Today” mixes up this opening segment, which often doubles as a preview of what’s coming up, under names such as “Today By the Numbers,” “Around the World Today.”

These segments are typically done using that curved video wall on the first floor.

Starting Aug. 24, 2021, the third hour of “Today” moved to an outdoor anchor setup, recycling what appears to be the angular anchor desk that was used in London in 2018 for coverage of Prince Harry and Meghan Markle’s wedding. 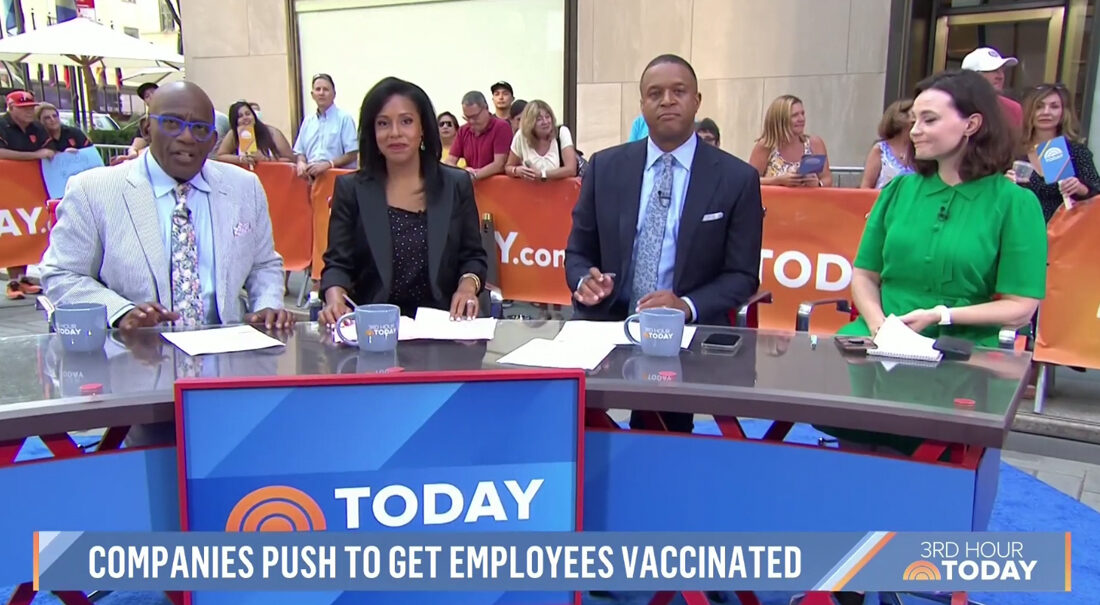 The desk was updated with a blue wrapper and “Today” logo graphic on the front. The third hour continued to leverage the plaza heavily throughout the week.

‘Today’ gains a video wall, appears to lose the ‘Orange Room’ in Studio 1A updates

As for what changes to expect downstairs, anchors have been referring to them as “makeover” and other similar words. The show’s most recent set change was moving the video wall originally used for Decision 2020 coverage to cover the area formerly known as the Orange Room.