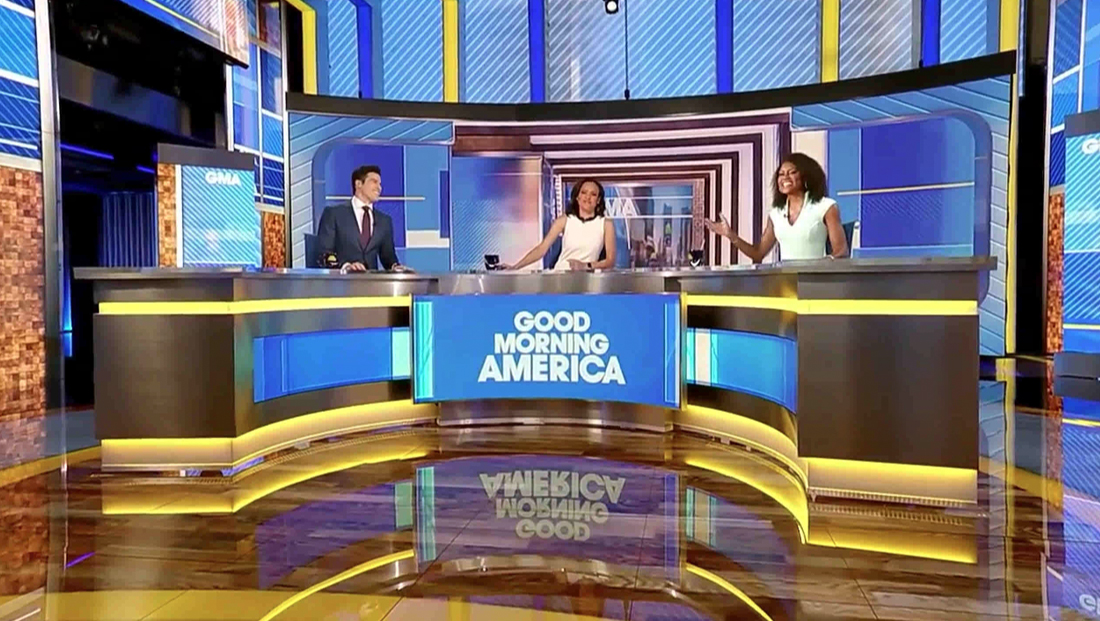 ABC News‘ weekend edition of “Good Morning America” moved back to Studio TV3 at the network’s headquarters on Dec. 18, 2021, leveraging the space’s large video walls to replicate the look of the show’s Times Square studio.

Weekend “GMA” had originated from the old iteration of Studio TV3 in years prior; however, it had been broadcasting from the Times Square space its weekday counterpart uses for some time. The network had always intended it to return it to TV3, according to NewscastStudio sources.

For the new setup, the network brought in another semicircular anchor desk and placed it in front of the large, curved video wall that’s usually used as the primary background for “World News Tonight.”

The desk features a segment of LED video panels in the center and backlit panels on either side as well as integrated lighting that is yellow during “GMA.” It can comfortably seat the three co-anchors in a socially distanced format — and appears to be able to accommodate at least two other people on the very ends.

While it has roughly the same shape as the one in Times Square that was brought in to space anchors out, the TV3 anchor desk has fewer LED video panels and backlit elements. It’s also different from the three-segment one used on the second floor of the Times Square facility for New York-based editions of “This Week” and “GMA3: What You Need to Know.”

The video wall behind the desk is fed with a virtual set extension recreating home base of the show’s Times Square studios — including the illusory, forced-perspective center hallway and two side walls with LED displaying structural light blue border elements with diagonal reveal lines.

The backdrop appears to be more of a composite of the actual set, however, as the real scenery is a bit wider proportionally.

What is similar, on the other hand, is the use of the Times Square imagery behind the center anchor position, but, with the width of the side walls reduced, there aren’t any skylines visible camera right or left, instead just blocky blue, white and yellow graphics. 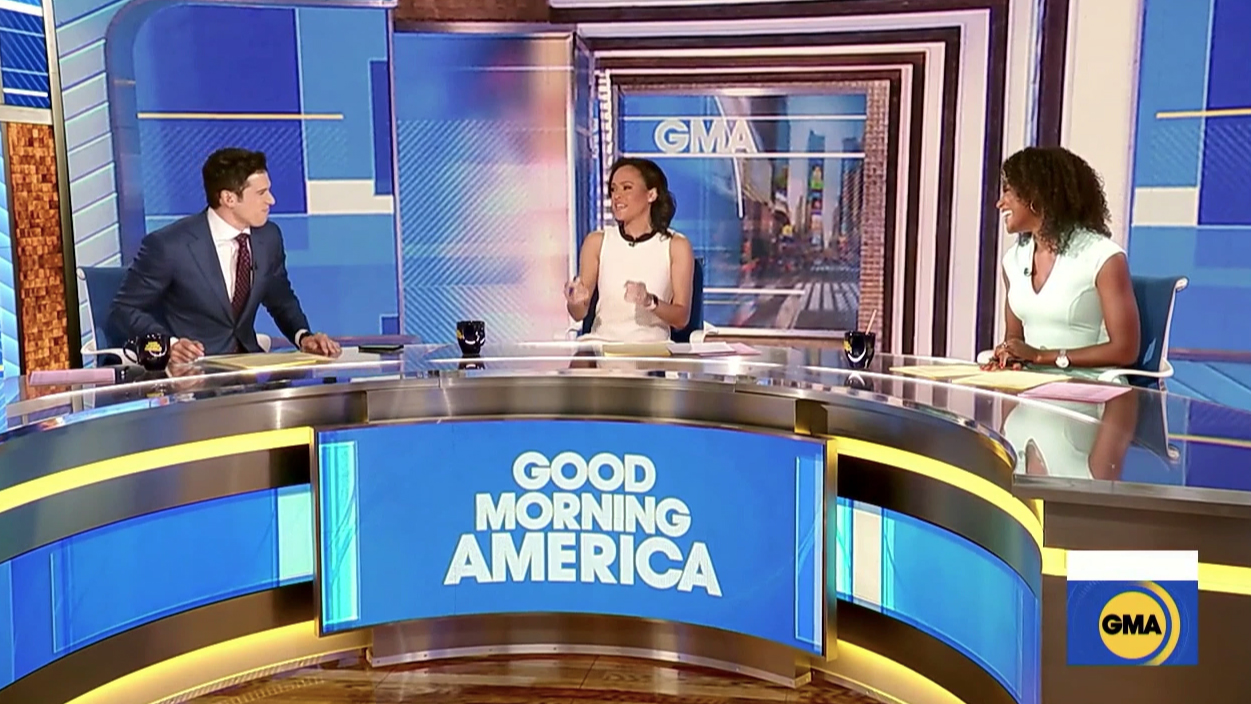 Elements from the Times Square set, including the blocky wood-toned walls, blue border and blue and metal accents are replicated on various other panels throughout the space. This also includes two freestanding vertical panels that are placed at an angle on either side of the main LED array.

Beneath the anchor desk, the LED video tiles in the floor are used to create the look of a wood riser with a yellow border in the middle encircled by a gray floor with a wood-tone border, all encompassed by a familiar glossy black studio floor. 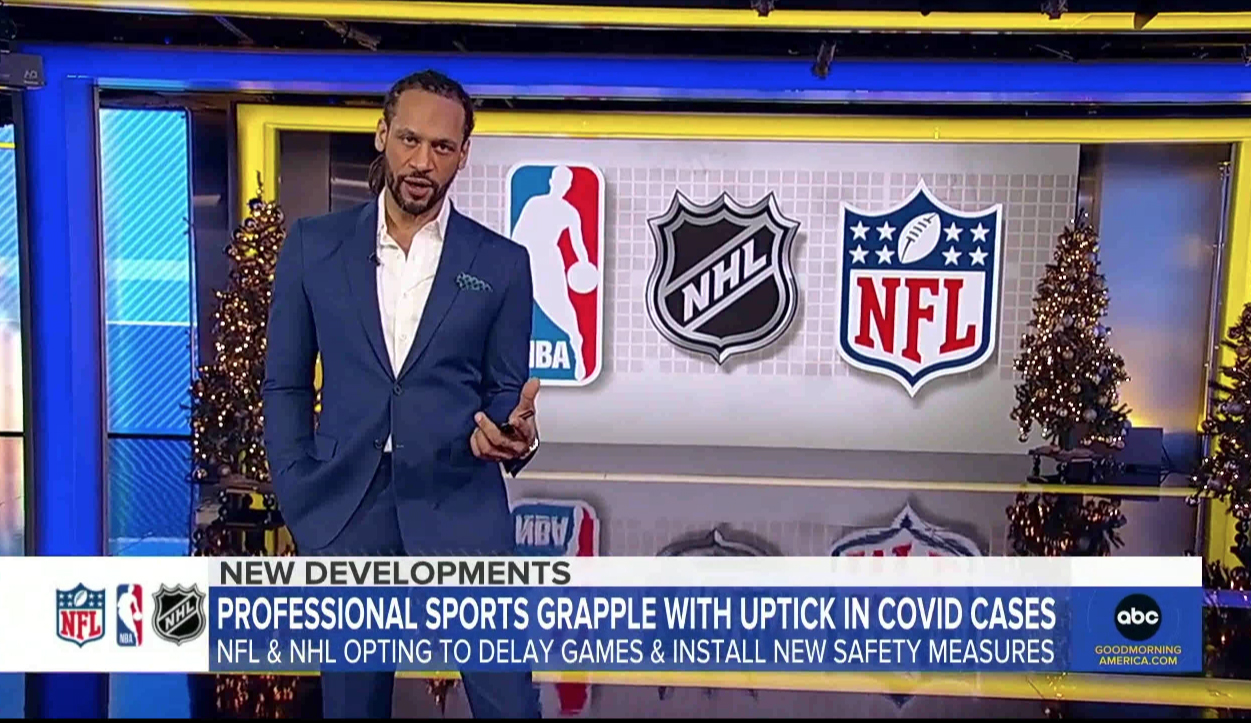 For in-studio stand-ups, the network used both of the alcoves on either side of the space, designating the video walls located here for topical graphics.

These shots also take full advantage of the depth offered by these spaces, with the internally lit column and ceiling elements lit in bold yellow and blue.

Because of their position in relation to the center of the studio, these shots afforded opportunities for on air camera moves when the three co-anchors tossed to the reporter as well as reverse shots to capture the interaction between talent — all while keeping everyone fairly socially distanced.

The alcove and the slanted LED “billboard” above are also used for “video on video” style shots using a floating camera “walk and wander” approach.

Since it’s the holiday season, the network also brought in a smattering of lit artificial Christmas trees that were scattered around the studio and mostly visible in wide and toss shots. For less formal segments, one of the alcoves was used along with an area rug and stylish seating to create a more interview-style setup that was backed with a bold geometric collage of the “GMA” logo. The side LED walls, which feature glass panels and X-shaped standoffs, were filled with a blurred background with diagonal hashmarks. 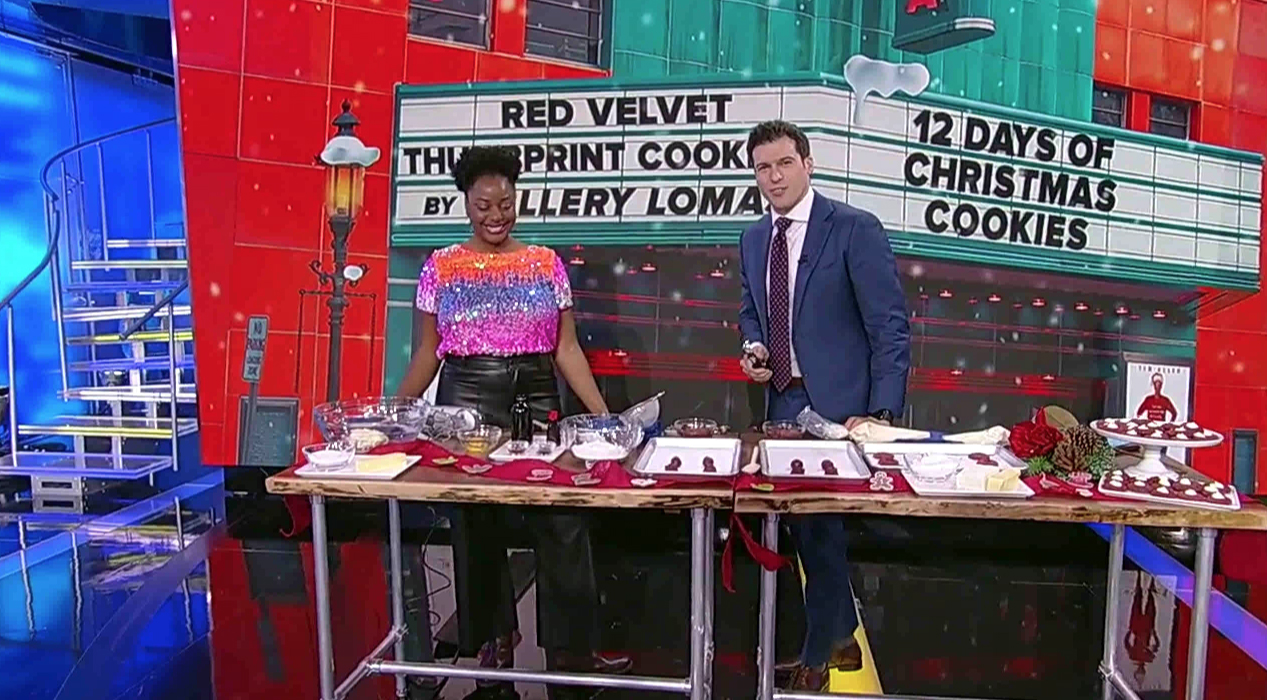 In addition, the studio wall opposite home base was also used, with the large wild panel swung forward for a cooking demonstration, with a fully branded graphic behind the tables brought in for the segment. The thick glass stairway here boasted blue, white and yellow accent lighting while much of the rest of the LED and walls around the swinging panel were tinted blue.

The current, expanded form of TV3 was originally opened in March 2020 for the network’s Super Tuesday coverage.

“World News Tonight” had quietly moved to a corner of the space prior to that, and the highly flexible space has been used for everything from a coronavirus special to space coverage.

It has numerous LED video walls, columns, headers, tickers and ceiling ribbons, as well as the LED tiles in the floor and color changing lighting. This gives producers and designers a wide opportunity to create unique looks for each show.

The space was also designed to incorporate elements from across ABC shows’ looks, according to Seth Easter, who designed both spaces. For example, TV3 includes upside down L-shaped lightboxes that peek out above the video wall on the staircase side of the studio that were inspired by the “GMA” internally lit “hallway” elements.

Ironically, the ones in TV3 weren’t visible during the Dec. 18 broadcast, and the network ended up “recreating” the element on the video wall opposite the real ones.

While it’s not immediately clear why “GMA” weekend made the move now, contributing factors such as the need to spread out productions across multiple facilities as well as possible delays in materials for set fabrication may have played a role in the timing.

ABC also appears to be taking a phased-in approach to moving shows to TV3.

Sources say TV3 was designed with the possibility of moving “This Week” to the space eventually instead of its current Times Square home when originating from NYC.

ABC News invests in Washington bureau ahead of 2022 midterms

The network recently invested in a redo of its studio in Washington, D.C, prominently featuring video walls in an update that shares design notes with TV3. This space is used when “This Week” originates from the district.

Consolidating more broadcasts into TV3 (or at least ABC’s main headquarters building) makes a certain amount of sense, since it could help cut down on the expense of having separate crews at different locations throughout the city — though that also has become somewhat more desirable thanks to the pandemic.